Mission 35: Roar, Tategami Lioh! (タテガミライオー 吼える！, Tategamiraiō Hoeru!) is the thirty-fifth episode of Tokumei Sentai Go-Busters. It marks the debut of Buster Machine LT-06 Tategami Lioh following its appearance at the end of the previous episode, it also features a guest appearance by Ichirou Mizuki.

While combating an enemy Megazord, the Go-Busters are caught off guard by the appearance of another Megazord. At the Energy Management Center, they discover it is the creation of Dr. Hazuki and his daughter reveals its name to be Tategami Lioh and it was created to assist the Go-Busters in battling Enter and his new Messianic Metaloids and Megazords.

After the attack by the mysterious lion robot, Kuroki reveals that it is the design of the late Professor Saburo Hazuki, the man who conceived the framework for the Buster Machines. As the Go-Busters track the lion robot to the surrounding foothills, they find Enter going after a young woman. After driving Enter off, the woman reveals herself to be Mika Hazuki, the daughter of Professor Hazuki. She reveals the robot is the Buddyzord LT-06 Tategami Lioh and explains that it wishes to fight the Go-Busters, who she reveals she has a hatred for. Red Buster uses Go-Buster Ace against the robot, but is defeated by Tategami Lioh's Buddy Animal mode, revealing the lion's strength. Still bothered by Mika's words of why she hates the Go-Busters, Ryuji finds Masato as he presents the blueprints for the Buddyzord, a Megazord with the AI of a Buddyloid built into it. This inspires Ryuji and Masato to study the blueprints to discover more about it. Later, as Go-Buster Ace gets its rematch with Tategami Lioh, Ryuji confronts Mika about her father's reasons for creating the Buddyzord before Enter intervenes in the plans. Yellow Buster Powered Custom and Stag Buster hold him off while Ryuji and Masato take Mika to another location, revealing that Tategami Lioh is meant to dock with Go-Buster Ace. However, as the docking causes it to assume its true mode, Masato reveals that Tategami Lioh is actually testing Go-Buster Ace for its worth as its partner. As Ryuji and Masato explain that Professor Hazuki's intention was to give the Go-Busters hope, Go-Buster Ace manages to defeat Tategami Lioh and win its loyalty just as Enter appears in the Type Epsilon Megazord to attack both Megazords. After Tategami Lioh gives Go-Buster Ace an edge with its Buddy Vehicle mode, it requests Red Buster to personally pilot it as they destroy the Type Epsilon Megazord together. Emerging from Tategami Lioh, Hiromu appears with the Buddyzord's control system which was created from digitized copy of Professor's mind who thanks his daughter for looking after Tategami Lioh. With Mika's blessings, the Go-Busters take Tategami Lioh as their new ally. 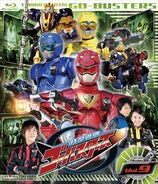 Retrieved from "https://powerrangers.fandom.com/wiki/Mission_35:_Roar,_Tategami_Lioh!?oldid=876314"
Community content is available under CC-BY-SA unless otherwise noted.