Mission 31: Space Sheriff Gavan Arrives! (宇宙刑事ギャバン、現る！, Uchū Keiji Gyaban, Arawaru!) is the thirty-first episode of Tokumei Sentai Go-Busters. It is the first of a two part team-up with Gavan Type-G.

After Messiah's first defeat, the Go-Busters are surprised to be alerted to the appearance of a strange energy in the city. When they investigate they find a robotic woman named Shelly who says she is the partner of Space Sheriff Gavan. After Ryuji, Yoko, and Shelly are sucked into Makuku Space, Hiromu must team up with Gavan to stop Rhino Doubler from causing trouble in the city.

When Messiah is defeated, the Go-Busters are surprised to be alerted to the appearance of a strange energy reading in the Deus district. The Go-Busters find a young woman being attacked by a strange monster before he takes his leave. The Go-Busters then turn to the young woman who introduces herself as Shelly, the partner of Space Sheriff Gavan who has been recently deployed to protect Earth. Taking her to the Energy Management Center, Shelly reveals that the monster they saved her from is Rhino Doubler of the Space Mafia Makuu and that she was separated from Gavan while in pursuit of the Double Monster. As the others look for the Double Monster, Yoko takes Shelly out to look for Gavan before they are attacked by Rhino Doubler with Yellow Buster holding the Double Monster off as he sends the girls into Makuu Space. While trying to look for the ladies, Morishita confirms that the Vaglass are still active as a supply of Enetron is stolen from the Maria district with a Megazord arriving within 10 minutes. As Ryuji confronts the Metaloid Danganloid 2 before he and the Metaloid are also sucked into Makuu Space, Hiromu and Nick search for Yoko and Shelly before Cheeda Nick is jumped by a youth in black who demands where the latter is. Stopping, Hiromu learn the youth is Geki Jumonji, the current Space Sheriff Gavan before being alerted of the Makuu Space portal with Geki telling Hiromu to stay behind while he saves his friends. But they are jumped by Buglers as Beet Buster and Stag Buster summon their Megazord to fight Danganzord 2. As Hiromu becomes Red Buster to fight the Buglers, Geki dons the Gavan Type G combat suit. Convinced of his determination, Gavan lets Red Buster join him in Makuu Space as Go-Buster Beet covers them before forming Buster Hercules to destroy Danganzord 2. Arriving in the nick of time with the others to safety, Red Buster and Gavan battle Danganloid 2 and use a combination attack to destroy the Metaloid and return to Earth. Later, Geki convinces Kuroki to let him and Shelly stick around so they can work with the Go-Busters to find Rhino Doubler. Elsewhere, revealed he's still alive from the explosion of the Megazord Type Epsilon, Enter is still researching Rhino Doubler's Axial Divertor 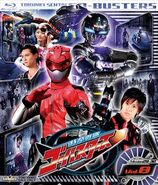