While attending an awards ceremony for Rika, Sprayloid 2 attacks, causing everyone to change their appearances to each other.

Unable to find Messiah, and alerted by the engineers that their leader is in pain, Enter realizes that he is still evolving despite the Go-Busters' interference. Confronted by Escape in the Segawa district over why she can not connect with Messiah, Enter assures her that he has found a new purpose while creating Sprayloid 2 to cause confusion with the aided task to find out Red Buster's Weakpoint. Elsewhere, Hiromu and Cheeda Nick are about to attend Rika's party after winning a prize for the children's book she has been working on, even though she put a chicken on the cover. They are about to reach the reception when they are alerted that Sprayloid 2 is attacking, while Nick is worried about the chicken drawings in Rika's book. The pair confronts Sprayloid 2 when the Metaloid uses his appearance-altering spray to make Nick look like Hiromu. The other Go-Busters arrive on the scene to fight Sprayloid 2's Buglers, all the while he uses his spray paint to change everyone's appearances, confusing everyone in the fight. Beet J. Stag arrives on the scene, ready to fight anyone he thinks is with Vaglass without asking questions first, but he accidentally splashes the gang with water, washing away Sprayloid 2's paint. Meanwhile, Sprayloid 2 has seen Nick taking Rika away from the fight, so he uses the opportunity to disguise himself as her and he manages to trick Nick into revealing that Hiromu's Weakpoint is seeing a chicken. Upon realizing he has been duped, he tries to lie about what he said, but Beet Buster arrives and drives Sprayloid 2 off. After Hiromu takes Rika to the hospital, Nick reveals to the group that Hiromu's Weakpoint is derived from a phobia he gained as a child. The group is soon alerted that Sprayloid 2 is attacking the Asami district in an attempt to call out the Go-Busters to confirm Red Buster's Weakpoint. The Go-Busters arrive on the scene, but Hiromu has not transformed. He charges Sprayloid 2 head on, despite the various images of chickens in the area to try to trigger his Weakpoint. However, Hiromu is entirely unaffected, until Sprayloid 2 realizes that his opponent is none other than Cheeda Nick in disguise. Sprayloid 2 manages to find the real Hiromu and tries to use the chicken image on him, but Hiromu's sunglasses allow him to block his sight in time, ruining Sprayloid 2's plans as the Metaloid is destroyed by the Go-Busters. As Nick washes Sprayloid 2's paint off, Buster Hercules is used to locate Sprayzord 2, which has been disguised as a skyscraper, before destroying it. Later, while seeing Rika off, Hiromu and Nick learn that two dogs in Rika's book are named Gog and Magog, the same names as Escape's weapons. Rika tells the two that she named the dogs after their mother's favorite statues. At the Energy Management Center, Masato reveals that the events that occurred were actually a distraction for the Vaglass forces in subspace to steal his Enetron supplies for Messiah who is creating a physical body with Enter witnessing his evolution.

Tokumei Sentai Go-Busters Volume 7 features episodes 25-28: Mission 25: Pursue the Mystery of the Avatars!, Mission 26: The Tiny Enemy! Control Room SOS, Mission 27: An Out of Control Combo to Escape the Labyrinth! and Mission 28: Beware of Chickens. [1] 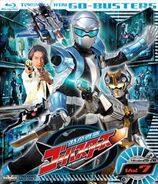 Go-Busters Volume 7, Blu-ray cover
Add a photo to this gallery

Retrieved from "https://powerrangers.fandom.com/wiki/Mission_28:_Beware_of_Chickens!?oldid=964925"
Community content is available under CC-BY-SA unless otherwise noted.