Enter meets Messiah's newest avatar in the real world, Escape, who proceeds to cause mayhem for the Go-Busters with her Keyloid

While looking at the Energy Management Center building, Enter is jumped by a mysterious woman revealed to be an Avatar, like himself, in the service of Messiah named Escape. At the Energy Management Center, the Go-Busters are alerted to an Enetron robbery to occur at the Ariadne Building hotel where they are holding an escape game. Though it is discovered to be a prank call, chances cannot be taken as Hiromu and Yoko enter incognito and learn that the prank was done by a boy named Shōta Segawa who has also joined the escape game with his friends Kaito and Rin.

By that time, Escape makes her way into the hotel's parking lot and createsKeyloid, then he proceeds to lock down the entire building. Having witnessed his action, Blue Buster fights Keyloid before Beet Buster and Stag Buster arrive for support. Inside, Escape and a group of Buglers hold the people hostage with Hiromu and Yoko forced to drop their cover when she is about to kill Shōta. Tricked into thinking that the Go-Busters are weak, a disappointed Escape takes her leave as she informs everyone that a Vaglass MegaZord will come in 17 minutes to destroy the building.

But upon learning that the Keyloid's attack has been cancelled once his key arm has been broken off, a furious Escape orders the Buglers to keep everyone from leaving the building. After confronting Shōta about his need to be cool and their acting weak, Hiromu gets the boys to safety and Hiromu tells Shōta not to let others judge him and to trust himself before Escape and Keyloid arrive. With Shōta taking his friends to safety, the assembled Go-Busters transform to fight Escape and Keyloid with Enter overseeing the fight, he lamenting of having overstimulated Messiah.

After Keyloid is destroyed, the KeyZord arrives and projects a field of Hyper Space around itself. Great Go-Buster is formed to venture into the barrier and the group successfully destroys the KeyZord. As Escape takes her leave, Shōta apologizes to his friends for putting them in danger and they all forgive him. 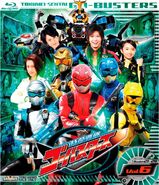 Retrieved from "https://powerrangers.fandom.com/wiki/Mission_22:_The_Beautiful_Avatar:_Escape?oldid=431777"
Community content is available under CC-BY-SA unless otherwise noted.