When Enter sends Filmloid to attack, it creates fake Go-Busters and can apparently display images from subspace. To combat the upcoming MegaZord, Masato works to tune up the Buster Machines.

Finding Hiromu with a Christmas music box before he goes to sleep, Yoko learns from Usada that the music box is Hiromu's last present from his parents before the accident 13 years ago. The next day, the team arrives at the Makuta district after being alerted to a Vaglass Megazord's transportation within 5 minutes and 30 seconds. While there, the Go-Busters encounter the Metaloid Filmloid as he creates copies of the Go-Busters. The Go-Busters fight their copies until the Filmzord arrives and creates a barrier around its surroundings. After Filmloid teleports away once his copies are defeated, Masato and Jay arrive to reveal the barrier the Filmzord has created is a projection of subspace. He has been called in by Kuroki to reveal that the nature of subpace, Masato offers their only chance is to modify Go-Buster Oh to combine with the BC-04 Beetle and SJ-05 Stag Beetle so it can enter subspace and destroy the Megazord. Masato oversees the process, while warning Hiromu that it may cause him physical harm as he is the main pilot of the Megazord. The next day, with Masato and the Buster Machine crew still continuing their work, Yoko confronts Hiromu about the risks he is taking. He assures her that it would be okay and that that must save everyone. Alerted to Filmloid in the Iwatani district, the Go-Busters arrive and defeat the Buglers before Filmloid uses his projection ability to have them see their deepest desire in his new Sweet Dreams attack. Though Blue Buster and Yellow manage to see through it, Red Buster cannot as his deepest desire is to be reunited with his family. Losing against Filmloid, Blue Buster and Yellow Buster take a hit meant for Hiromu. But at the last second, despite Filmloid's gloating, Red Buster snaps out of the delusion in time to save his friends as he is forced to discard Filmloid's delusion to destroy the Metaloid with extreme prejudice. Once alerted that he has completed the modifications, the Go-Busters arrive as they, Masato, and Jay witness the formation of Great Go-Buster. Great Go-Buster then is deployed into the subspace projection, and they fight the Filmzord before destroying it. Upon seeing Messiah's apparent form as the subspace projection collapses and Enter falls back, Hiromu loses consciousness from the strain, but has a content look on his face. 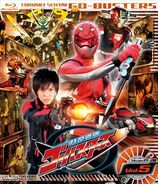 Retrieved from "https://powerrangers.fandom.com/wiki/Mission_20:_5-Man_Concentration!_Great_Go-Buster!?oldid=914253"
Community content is available under CC-BY-SA unless otherwise noted.