Mission 16: The Man from Hyper Space

Mission 16: The Man from Hyper Space (亜空間から来た男, Akūkan kara Kita Otoko) is the sixteenth episode of Tokumei Sentai Go-Busters It is the debut of BC-04 and SJ-05.

When Hiromu learns that the two new Go-Busters originated from Hyper Space, he challenges Jin to a duel, suspicious of their motives.

While they think Masato can finally give them the answers they are looking for, the Go-Busters learn that Beet J. Stag is trying to force his way in through one of the chutes for Enetron. When Jay attempts to shoot it out, Hiromu intervenes.

After getting a few cans of Enetron, Jay says that Masato helped him enter the world before he takes his leave. Deciding to follow him to Masato to get the answers they are looking for, yet being a bit fearful about what they might discover, Hiromu continues onward while the others go to Yūbara district to intercept the Metaloid Parabolaloid.

However, after finding Masato and asking him about the other scientists who were also sent to Hyper Space with him, they get into an argument after Masato blames Hiromu's father for "brainlessly" dragging him and the others into Hyper Space. Angered, Hiromu throws a punch at Masato, who blocks the attack and says he wants to see how good Hiromu is. He says if Hiromu can beat him, he'll tell Hiromu all about the subdimension. They fight and Masato easily beats Hiromu. Eventually, they assume their Go-Buster forms and take their fight to a warehouse. By then, after eluding Ryuji and Yoko, Parabolaloid locates Beet Buster as he and Enter step in the two Go-Busters' fight.

As Enter restrains Beet Buster for answers, Parabolaloid uses his homing missiles against the primary Go-Busters. Beet Buster lets one of the missiles lock onto him, "killing" both him and Enter. However, as Enter reforms, Jay uses his Marker System to recreate Masato.

Revealed to be an avatar of the real Masato, he states his intentions to fully return to the real world with the primary Go-Busters' help. He and the others then transform to fight Parabolaloid and the Buglers before the ParabolaZord arrives, with Enter manually controlling the Megazord.

As Blue Buster and Yellow Buster destroy Parabolaloid, Go-Buster Ace fights the ParabolaZord before being restrained by BugZords. Beet Buster has Jay summon their own Buster Machines: BC-04 and the SJ-05. The Buster Machines assume Animal Mode and siphon the BugZords of their Enetron before destroying them as Go-Buster Ace does the same to the Parabolazord.

Later, Masato explains that he was not with the other scientists and thus has no idea what became of them. Masato gives the primary Go-Busters a Christmas music box. Now knowing their parents are alive, Hiromu and Yoko resolve to save them and the other scientists. 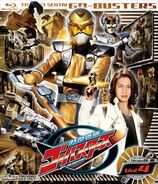 Retrieved from "https://powerrangers.fandom.com/wiki/Mission_16:_The_Man_from_Hyper_Space?oldid=839869"
Community content is available under CC-BY-SA unless otherwise noted.