Mission 10: A Reason to Fight

Mission 10: A Reason to Fight (戦う理由, Tatakau Riyū) is the tenth episode of Tokumei Sentai Go-Busters

Hiromu's older sister Rika confronts him on his joining the Go-Busters.

After taking out an army of Buglers, with Blue Buster's Weakpoint taking effect during the fight, the Go-Busters learn that the grunts are a distraction used by Enter so he enter the Sawatari district to steal a crate holding 500 tons of the metal alloy known as Deltanium 39 so he can build the BC-04. Realizing that using a Megazord to transport the alloy to Messiah is the next phase of Enter's plans, the Go-Busters are placed on standby. In the interim, Nick tries to get Hiromu to see his sister Rika's new art exhibition, but Hiromu refuses to go. Nick decides that it should be his job to try to square things out between the brother and sister, even though Rika despises him.

Though he gets lost in near the Ōmae district, Nick finds Rika as he tries to convince her of the importance of Hiromu fighting Vaglass. However, believing that he and the EMC purposely drafted Hiromu to their case, she accuses him that all he wants to do is break her family up. Before he can say anything, Nick gets alerted of a Metaloid sighting with a Vaglass MegaZord's arrival within 30 minutes. And on top of that, the Deltanium 39 crate is guarded by Meta-Cell-infected humans.

As the GT-02 prepares to confront the Megazord, with the RH-03 attempting to get to the crate, Hiromu arrives to the building as Nick arrives with Rika, much to his dismay. Though she tries to convince him to quit being a Go-Buster, Hiromu ignores her in order to save a family with a young child and then tells her that he fights the Vaglass because it was his decision to join the Go-Busters. He leaves his sister to transform and enter a nearby building to stop the Deltanium 39 theft. Racing upstairs, Red Buster is confronted by the Metaloid Danganloid, as Enter speaks to him over an intercom to explain that the Metaloid was made just for fighting him.

Danganloid manages to counter Red Buster in a high speed battle, matching the Go-Buster's every move. Upon the DanganZord's arrival, as Nick explains to Rika of Hiromu's resolve to ensure no family ever suffers as they have by the Vaglass, Red Buster manages to use Danganloid's speed to destroy him by having him run towards him firing the Ichigan Buster Special Buster Mode as Yellow Buster knocks out the Meta-Cell-infected people. Though Red Buster and Nick manage to save a Meta-Cell-inflected boy on top of the crate, the DanganZord manages to transport the crate into Hyper Space.

With the mission over, Enter deletes the Meta-Cells just as he leaves. As Rika now understands her brother upon seeing the family reunited, Red Buster enters the CB-01 to join the fight. Forming Go-Buster Oh, the Go-Busters destroy the Danganzord.

Hiromu and Nick try to track down Rika later, but they cannot find her, only to find a sketch book with a drawing the Sakurada family and an animalized Nick, Rika's way of accepting the Buddyroid into the family. 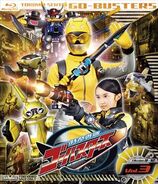 Retrieved from "https://powerrangers.fandom.com/wiki/Mission_10:_A_Reason_to_Fight?oldid=913275"
Community content is available under CC-BY-SA unless otherwise noted.