Minoru Uesugi (上杉 実, Uesugi Minoru) is Green Racer (グリーンレーサー, Gurīn Rēsā) of the Carrangers. He is the oldest of the team, 24 years old (39 in Gokaiger), and a bungling salesman at Pegasus.

He once loses the bracelet portion of his Accel Changer (and thus the Green Racer powers) while practicing victory poses after a fight, though he quickly recovered it after beating YY Gonza, who found it by his brother's improvised grave and started using it on his tail. Minoru speaks with an Osakan accent and is a fan of the Hanshin Tigers baseball team. He also used to be afraid of lightning since when he was a child, when he was shocked by an electric eel, but managed to overcome this fear in order to help his team defeat Elekinta.

Green Racer is among the Sentai warriors seen in clips when Gouki (GingaBlue) lectured Soutarou Ushigome (GaoBlack) about the past Sentai strong warriors, humbly claiming to not be nearly as strong as they are.

Years later, Minoru fought alongside not only his own team, but every single Sentai ranger in existence, against the Empire of Zangyack when it attacked the Earth in the Great Legend War. After fighting against hundreds of Gormin and their Zgormin commanders. Kaijou noticed the fleet moving towards them, he gathered all the Rangers together and gave them the order to sacrifice their powers to wipe out the first invasion's armada. The Green Racer powers are later used by Don Dogoier via the Ranger Keys.

After the defeat of Ackdos Gill, Captain Marvelous returned all the Ranger Keys to the former Sentai heroes. It is assumed Minoru and his teammates received their keys, allowing for them to utilize their powers once again.

Minoru, alongside his team (bar Signalman), among the majority of the Super Sentai heroes, was caught up in the "Super Hero Taisen" incident which eventually resulted in the Super Sentai teams and Kamen Riders joining forces to defeat both Dai-Zangyack and Dai-Shocker. During the final battle, he is seen fighting a Gormin.

Green Racer appeared with his team among the first 38 Super Sentai whom collectively empowered Wild Tousai Shuriken King in its fight against the titanic Gillmarda, granting the Ninningers and Zyuohgers the power to perform the Zyuoh Ninnin Super Sentai Burst which destroyed Gillmarda with the combined power of all 40 Super Sentai.

Minoru joined the Super Sentai Strongest Battle as a member of Frivolous Team. It’s unknown whether he participated in the match, but his team lost the first round against the Leader Team. 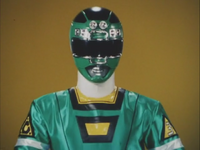 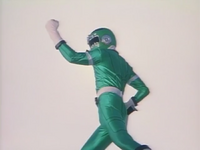 The Green Racer Ranger Key (グリーンレーサーレンジャーキー, Gurīn Rēsā Renjā Kī) is Minoru Uesugi's personal Ranger Key and what became of his powers after he along with the rest of the 34 Super Sentai sacrificed their powers to end the Great Legend War.

This key along with the majority of the Ranger Keys were collected by the Red Pirates and later used by the Gokaigers. The Green Racer Ranger Key was mainly used by Don Dogoier (Gokai Green), who used it to fight as Green Racer.

After Zangyack were finally defeated, the Gokaigers gave the Ranger Keys back to their rightful owners. Minoru received his key and became Green Racer once more.

Minoru as Green Racer appears with his team in the video game Gekisou Sentai Carranger: Zenkai! Racer Senshi. The RV Mechas have been dismantled and their parts scattered all around, so it is up to the Carrangers to collect all the parts required to rebuild them, all the while fighting the Bowzock gang. The parts appear in the form of cogs and gears, and can only be obtained by striking various objects and killing off Wumpers along the way, among other forms (finding and getting an engine, for example, will give off ten parts). Each Mecha requires 50 parts to be rebuilt.

Minoru Uesugi/Green Racer: to be added

Green Racer is among the vast pantheon of Rangers which are available in the mobile game Super Sentai Battle Base.

Green Racer appears with his team among all Sentai in the mobile game Super Sentai Legend Wars.