The Minizord is an auxiliary Zord of the Ninja Rangers. It later becomes known as the Ninja Zord[1] which functions as a manifestation of the Ninja Storm Ranger powers. 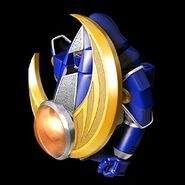 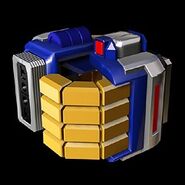 As seen in Super Megaforce

Later on, it was reconfigured into the physical manifestation of the Ninja Storm Rangers' Legendary Powers used by the Super Mega Rangers. It has a significantly different design with a dark green, gold, silver, and red color scheme, borrowing elements of the Samurai Star Chopper, another Power Rangers Ninja Storm zord.