A Star Is Born (reversion)

The first season of Mighty Morphin Power Rangers first aired on Fox Kids from August 28, 1993 to May 23, 1994. Although it was a children's series, it became an iconic part of 1990s pop culture.

On January 2, 2010, a reversion of the season with a new logo, comic book-inspired graphics, and alternative special effects began airing on ABC Kids, but was pulled from the schedule after 32 episodes. It was later uploaded in the official Power Rangers YouTube channel in 2021.

The earliest iteration of Power Rangers dates back to 1986 when future co-creator of Power Rangers Haim Saban was in Japan on a business trip and happened to turn on television to see the eighth Super Sentai series Choudenshi Bioman. Seeing it as an opportunity to make a lot of money, Haim approached the makers of Super Sentai Toei and got the rights to adapt Bioman so they made a pilot episode to pitch to executives. However, it was consistently refused by TV executives because every adaptation of dubbed material up until this point were massive failures (note: this was around ten years before Pokemon or Dragon Ball Z). By the time that Fox Kids executive Margaret Loesch finally approved it for thier children's block in 1992, Bioman was outdated so Saban went into production using footage from Kyoryu Sentai Zyuranger from 1992. One element carried over from the failed Bio-Man pilot however were the names of the Rangers; in the pilot they were Victor Lee. Zack Taylor. Billy Cranston. Trini Crystal, and Kimberly Harte. In the series proper, the Rangers were, Jason Lee Scott, Zack Taylor, Billy Cranston, Trini Kwan and Kimberly Ann Hart. According to voice actor Michael Sorich at Power Morphicon 2018, there was a first pilot for the series which was originally called Metalheads and combined footage from both Zyuranger and Superhuman Machine Metalder (which was later the primary source for VR Troopers). Why this was rejected is unknown but he implies it was because it was very bad quality so they went with a different pilot episode to pitch it properly to get green-lit as a show. [1] However, there were some drawbacks to being made; Fox Kids afforded Power Rangers a tiny budget for a television series because they didn't want to lose a lot of money since they assumed that MMPR would bomb. One very strange change made in production was the comic relief. In Zyuranger, the Blue Ranger was the comic relief with the Black Ranger being the resident genius but this was flipped in Power Rangers unknown reasons. As a result, in episodes like "The Rockstar", the Blue Ranger can be soon acting over the top and goofy despite that being very out of character.

Casting for the first season of Power Rangers was complicated. Austin St. John auditioned and was cast as Jason Scott because, in his own words, “a friend bet me twenty dollars that I wouldn’t be wasting my time.” Another man named Jason David Frank also auditioned for the role of Jason but didn't make the cut though he would later be brought on as the very first Sixth Ranger Tommy Oliver due to casting director Katy Wallin liking him. David Yost became Billy Cranston as there was a local audition and he went for fun. Amy Jo Johnson became Kimberly Ann Hart after moving to LA, having studied acting at university and was planning on leaving but “my new acting coach convinced me to stay.” She got the part two weeks after. Walter Jones nearly missed it completely as he had been on his way to Florida to try and join the show Star Search, having left his last job as a cruise ship entertainer. He missed the first audition but made the second and got the role of the Zack Taylor. The casting for Trini Kwan was much more complicated however. In the original pitch pilot, Trini was played by American actress Audri Dubois but she was fired when she wanted more money (a mistake Saban later repeated) and replaced her with Vietnamese immigrant Thuy Trang.

The villain voice actors were hired more sporadically. Rita Repulsa was played by Machiko Soga via Japanese stock footage but they needed a English voice. Barbara Goodson was an immediate choice due to having previously worked with Saban on various animated projects but she famously almost missed out on it due to them wanting a Wicked Witch of the West style voice. After being flown out to LA just to be rejected, Goodson was so angry that she apparently yelled at the producers "You want angry? I'LL SHOW YOU ANGRY!" in the exact same voice she would later use for Rita and she was hired on the spot. Kerrigan Mahan was known by Saban as a skilled dubber, having worked with the company before on several other projects such as Space Pirate Captain Harlock and Tekkoman Blade and so he was one of the "go-to" voice actors. With this in mind, he was asked to come in one day to work on Power Rangers, and when he was in the recording studio, dubbing director Tony Oliver simply said, "OK, Kerrigan, I think there's a gold guy that I want you to play, a guy with wings." [2] The tone of Goldar's voice varies considerably throughout the first season of the series; originally having an intense and angry snarl before becoming deeper but less gravelly starting with "Crystal of Nightmares." This initially fuelled speculation that Mahan had not been the original voice of the character. In reality, Mahan had voiced the character with a gravelly, higher-pitched tone in the earliest episodes but the resulting vocal strain forced him to experiment with other versions of the voice until he eventually settled on Goldar's iconic, low guttural inflection. Sound bites of Mahan's earlier performance were still used in later episodes, most notably in "Goldar's Vice-Versa" during the Zord fight.

Saban was originally going to produce only 40 episodes in the series, ending with the two-parter "Doomsday." Another character was to make an appearance, named Bubba. As the episode was originally written, he piloted Cyclopsis, and was based on the character of Dahl Tribe Prince Kai from Zyuranger. After Cyclopsis' defeat at the hands of the Rangers, Rita would be sealed away in an urn (using footage from the ending of Zyuranger) and the teenagers would give up their powers. However, due to the unforeseen popularity of the series, Saban was faced with the possibility of exhausting all of its Zyuranger footage with no more to fall back upon in order to continue producing the show. Saban contacted Toei along with Rainbow Productions which designed and produced the monster suits, requesting another half-season's worth of Zyuranger footage to be made specifically for Power Rangers. The two Japanese companies agreed, creating around 25 brand-new monsters and filming both human and Zord-sized battle footage for each. They also incorporated elements from MMPR into the footage, including a relationship between the Green and Pink Rangers, and the Blue Ranger's portrayal as the brains of the group. This footage is collectively known in the Power Rangers fan community as "Zyu2" though it has no official name.

Long ago, the ancient wizard Zordon Battled the evil sorceress Rita Repulsa. After many years he managed to defeat her using five magical power coins. As punishment for her loss, she was sealed in a canister on the Earth's moon. However, before being sealed away, Rita trapped Zordon in a time warp.

10,000 years later, Rita and her minions have escaped their prison and are out to conquer Earth. Zordon, desperate to stop her, has his assistant Alpha 5 recruit five "teenagers with attitude": Jason, Trini, Kimberly, Zack, and Billy. Granted the powers of prehistoric animals in the form of Power Coins, they become the Mighty Morphin Power Rangers.

After several losing battles, Rita captures a newcomer to Angel Grove named Tommy Oliver and brainwashes him to become her Evil Green Ranger. Though Tommy inflicts repeated and crushing defeats to the Rangers, they are ultimately able to wrest control of his mind away from Rita, and he joins the team as the sixth Power Ranger. His first stint with the Rangers would be short lived, however, when Rita creates a magical green candle to strip Tommy of his powers and return them to her control. Tommy elects to give what remains of his powers to Jason in order to keep them away from Rita.

The Rangers continue to battle Rita's increasingly evil schemes, and Tommy is later brought back to their side (albeit in limited capability) when Zordon is able to infuse his Power Coin with his own ancient power. However, Rita's presence only invites even more trouble...

Legend:◆ piloted zord, ➲ carrier zord; colors are in reference to the Rangers who pilot them, not the physical color of the Zords 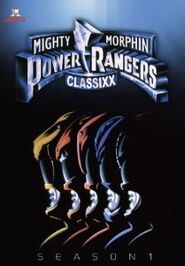