Bandai America released a series of Mighty Morphin Power Rangers items to coincide with the new movie. These were composed of re-releases, all new figures and chrome versions of existing toys.

These were sculpt improvements on the previous Auto-morphin toys, removing the action feature and improving the physiques of the male and female sculpt. These were initially released as movie-edition but in metallic chrome, not in the design of the movie suits. No Evil Space Aliens were released in this packaging, but they were released in the regular Mighty Morphin Power Rangers (90's toyline).

White Ranger
Add a photo to this gallery 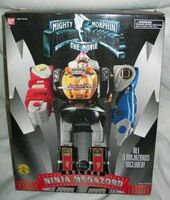 Movie Edition: Falconzord
Add a photo to this gallery

The Collectible Figures are the only things close to movie-accurate in the Movie Edition releases.

Retrieved from "https://powerrangers.fandom.com/wiki/Mighty_Morphin_Power_Rangers:_The_Movie_(toyline)?oldid=694454"
Community content is available under CC-BY-SA unless otherwise noted.