Playstation 4 and Xbox One[1]

Power Rangers: Mega Battle is an alternate version of Mighty Morphin Power Rangers as 2D sidescrolling beat 'em up arcade game. The game was announced at the 2016 New York Comic Con with the teaser trailer for the game later uploaded to the Internet after the Power Rangers panel ended.

A series of mysterious towers have been placed all around Angel Grove, forcing five civilians to spring into action. Later, Zordon gives them powers to become the Power Rangers. Eventually they save another civilian, Tommy, from Rita Repulsa's spell. He becomes their ally as a new evil appears- Lord Zedd, who's set up the towers in order to control Serpentera.

Play As Jason, Trini, Kimberly, Billy, Zack, Tommy (Green And White), Adam, Kat, Rocky And Aisha In This Game, They Have Levels Which are Based On The Old Mighty Morphin Power Rangers Episodes.

The levels go as followed: Each Player picks a Ranger then fights their way through various monsters including the Putties. Upon reaching the Boss Monster, the player fights them at full size, after which the Megazord Battle starts.

Each Megazord Battle is divided into two parts. The first is where the player takes control over the Megazord Tank Mode, and blasts at weak points and oncoming attacks from the boss. After depleting the boss's first health bar, the Megazord will convert to Battle Mode, and it will continue like normal gameplay with occasional quicktime events to deal damage.

The Megazord vs. King Sphinx 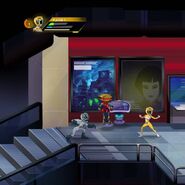 Screenshot of basic gameplay; note Alpha 5 in the background
Add a photo to this gallery

Retrieved from "https://powerrangers.fandom.com/wiki/Mighty_Morphin_Power_Rangers:_Mega_Battle?oldid=793963"
Community content is available under CC-BY-SA unless otherwise noted.