A new Mighty Morphin team has assembled to take on the deadliest threats to Earth – but who is the All-New Green Ranger by their side? The new Mighty Morphin team are on a collision course with an even deadlier Lord Zedd, who has a new mission and a new motivation – one that will change everything you thought you knew about our heroes! But even if the Mighty Morphin team can find a way to survive Zedd and their mysterious new enemies, they may discover the greatest threat to their future is the shocking secret of Zordon’s past! A new Mighty Morphin epic begins here, perfect for longtime fans and new readers alike.[1]

A flashback happens during the time of the Guardians of Eltar with the Hartunian Empire. Now, back at the Command Center, Zordon, Alpha and Billy still can't locate the mysterious Green Ranger. Meanwhile, the Rangers discuss whether the Green Ranger could be their ally.

On the Moon, Baboo suggests capturing the Green Ranger to spare the others from Lord Zedd's wrath. Back at the school, while the Rangers continue training and chatting, Bulk and Skull argue about Candice's presence. At the Command Center, while Billy's on a lunch break, it reminded Zordon about the food back in Eltar.

A panda-like monster named Pandamonium then attacked near a construction site and the Rangers were sent to stop it. The Green Ranger unexpectedly arrived to help them before teleporting as soon as the monster was destroyed. Back at the Moon, Lord Zedd awakened with a new plan in mind. After distracting Skull, "Candice" chats with an unknown being saying they need to speed up their mission of protecting Eltar. 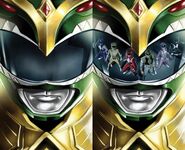 connecting variant cover for State of Comics by Steve Morris