Michael[1] "Mike" Corbett was a soldier of Terra Venture. Though he was one who pulled the Quasar Saber containing the Red Galaxy Ranger powers, an ensuing battle forced him to hand the saber to his younger brother as he fell into an abyss to his assumed death. However, he is later revived and became the second Magna Defender after the original Magna Defender sacrificed his life to save Terra Venture.

Mike was one of the security personnel assigned to the space station Terra Venture, acting as Commander Stanton's second in command. During a training exercise, he encountered a girl named Maya, who had emerged through a spatial rift from the planet Mirinoi. Accompanying her, he and several others pulled the five Quasar Sabers from their stones. Furio, who was attempting to take the sabers, became enraged and began turning the planet into stone. As they attempted to escape, Mike fell into an abyss that Furio created. Mike was able to pass his Quasar Saber to Leo before he fell.

TV STORY-Redemption Day. When Leo considered giving Mike the Red Quasar Saber back, Mike refused, saying it was Leo's destiny to become the Red Ranger, even speculating that he had only been the one to draw the Saber from the stone so that he could pass it on to his brother. The spirit of the Magna Defender later appeared to Mike and gave him a Morpher that allowed him to become the new Magna Defender, telling him that it was his own destiny

TV STORY-Destined for Greatness. Mike became a loyal ally to the Lost Galaxy Rangers. Terra Venture attempted to escape the Lost Galaxy by entering through an open portal. The portal was closing and the station was not fast enough. Mike sacrificed his powers, and nearly killing himself in the process, to hold open the portal long enough to let the space station through.

Years later, Mike's powers were fully restored by unknown means and he became the Magna Defender once more and returned with the other Galaxy Rangers as part of the army of Legendary Rangers that helped the Mega Rangers defeat the Armada once and for all, fighting in a huge battle against hundreds of X Borgs and dozens of Bruisers. He then returns to Mirinoi

He was shown along with Space Rangers and Galaxy Rangers when the villains were looking for a past villain to revive with the Reanimizer, and came across Psycho Red.

Receiving Zordon's call through the Morphin Grid, Mike was among the Rangers who rallied to his pocket dimension for the last stand against Lord Drakkon.

After having his Morpher reinforced by Doctor K, Mike took part in a mission to Lord Drakkon's fortress to rescue captured Rangers, and was subsequently aboard the Promethea when it was trapped in an unknown dimension known as “The Void”.

Trapped on the Promethea for over 4 weeks, Mike was willing to board the Promethea ship on a mission to find life aboard on an unknown vessel. While dealing with hostile forces on the vessel, Kimberly saves Mike from attempting to send himself out of the airlock with them. Tanya criticizes his reckless behavior and the two of them develop a bond.

Michael as the Magna Defender and Black Solar Ranger is among the Rangers who feature in Power Rangers Legacy Wars,he is a Legendary (Leader), Legendary (Assist) character, and represents Galaxy Rangers alongside Kendrix Morgan. 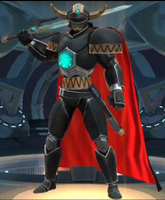 The Magna Defender as seen in Power Rangers Legacy Wars.

Power Rangers Battle For The Grid

Mike is a playable character in Power Rangers: Battle for the Grid , He uses his Magna Sword primarily as his weapon. 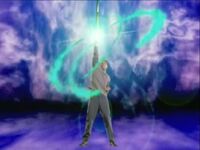 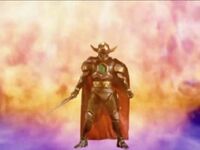