3,000 years before Wild Force, the land of Animaria waged a war with an evil who rose from the Earth called Orgs. Six Ancient Warriors defended the land from these creatures. Five of them used the powers of the Crystal Sabers, while the sixth, Merrick, was assigned to protect Princess Shayla, who he also had feelings for. To keep some of Animaria's culture safe, it was lifted into the sky by the Ancient Warriors. On this floating island, a slumbering Shayla and five Power Animals were kept safe. The warriors defeated most of the Orgs, but they could not defeat Master Org, who destroyed Animus.

With little hope left, Merrick set out to find a legendary wolf mask which was said to give great powers. He found the mask at Nayzor's temple, along with three Animal Crystals. He put the mask on, and summoned the Wolf, Alligator, and Hammerhead Shark Wildzords to form the Predazord, which was able to destroy Master Org. But, the victory over the Orgs came with a price. Merrick was unable to remove the mask, which began to corrupt him, causing him to fall under its evil influence. As the evil Zen-Aku, Merrick was out of control, even attacking the Ancient Warriors. The warriors had no choice but to take Zen-Aku down, and imprison him in a tomb (though he begged them to destroy him instead).

In present day, the new Master Org wages a new war against the successors of the Ancient Warriors - the Wild Force Rangers. He decided to have Zen-Aku freed in hopes of using him against the Rangers. Zen-Aku awakened, and swore to get vengeance against the Rangers for their predecessors having him confined. As Zen-Aku, his memory was hazy, with only a vague recollection of being imprisoned by the Ancient Warriors, none of being human or having been cursed by a mask. He would only regain his human guise once a month on the night of a new moon, but would immediately return to his savage, amnesia-ridden form by daybreak.

Zen-Aku's overwhelming power and fierce Dark Wildzords defeated the Rangers in each and every battle. He even managed to steal the Elephant, Giraffe, Black Bear, and Polar Bear Zords from them. With each battle, the Rangers discovered more clues about Zen-Aku's secret, and Zen-Aku started recalling bits and pieces of his memory, particularly when he was around Princess Shayla. To prevent him from remembering the past, Nayzor implanted a bug into Zen-Aku's head which would further cloud his memory, and strengthen his resolve in destroying the Rangers. By this time, the Rangers had already figured out Zen-Aku's true identity, and sought a way to restore it.

The spirit of Animus appeared to Zen-Aku twice, to try and make him remember his past. Animus even created an eclipse to cut off Zen-Aku's power source, and allow the Rangers to reach through to Merrick for a brief period. Neither plan worked, and Zen-Aku returned, still seeking vengeance. Finally, Princess Shayla determined that the power of the curse lay within the Dark Wildzords. To break the spell over Merrick, the Predazord needed to be defeated in battle. To accomplish this, the Rangers were assisted by new Wildzords, the Rhino and the Armadillo. With these new Power Animals, they formed the Wild Force Megazord Striker mode, which was able to take down the Predazord, scattering its Animal Crystals. Amidst the chaos lay Merrick, restored back to normal, with a broken wolf mask nearby. The Rangers asked Merrick to join them, but Merrick refused. He was not ready to forgive himself for his actions as Zen-Aku, and did not feel worthy to join the team.

Merrick later risked his life by taking on Master Org and the Quadra Org to get back the Animal Crystals he had stolen as Zen-Aku. He was getting beaten badly, until his old Wildzords finally answered his calls and came back to him. They gave him the Lunar Caller, giving him the ability to morph into the Lunar Wolf Ranger. With the power of the Howling Wolf behind him, Merrick defeated Quadra Org, and then Nayzor, retrieving the four Animal Crystals in the process, and returning them to the Rangers. Merrick remained a recluse, helping the Rangers when necessary, but unwilling to get close to them, or to pursue the romantic feelings he has for Princess Shayla. Instead of living on the Animarium, which he stayed away from out of self-exile and guilt, Merrick worked at Willie's Road House, where he did chores in exchange for room and board. He knew when the Rangers needed him when the wind would blow and warn him of the danger.

As time went by, Merrick couldn't help but grow closer to the Rangers, and eventually accepted them as friends, once even managing to bring himself to visit Princess Shayla and the Animarium. After Master Org was defeated, he gave up his Ranger powers and left Turtle Cove to travel the world for his next adventure. Zen-Aku, who (somehow) survived, offered to join him, saying that they were both "lone wolves looking for redemption". Merrick accepted the offer and the two set off together.

The Lunar Wolf Ranger was featured in a chronicle of Power Ranger history compiled by Tommy Oliver shortly after he formed the Dino Rangers, which was found by the nascent Ranger team in the Dino Lab.

Merrick returned with his fellow Wild Force Rangers as part of the army of Legendary Rangers that helped the Mega Rangers defeat the Armada once and for all, fighting in a huge battle against hundreds of X Borgs and dozens of Bruisers.

Merrick along with the other Wild Force Rangers among all the Ranger teams which appear in the Korean-developed mobile game Power Rangers Dash. 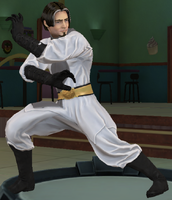 Lunar Wolf Battlized Warrior is the Lunar Wolf Ranger Battlized, he can access this form by a Robotic Lunar Wolf Armor, this form is exclusive by Wild Force's toyline.
Arsenal 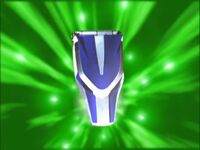 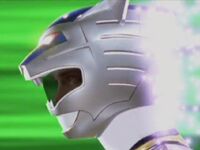 The Lunar Wolf Wild Force Ranger Key is Merrick's personal Ranger Key. This key along with the other 14 Official Sixth Ranger Keys are seen lining the Command Center's interior walls. This key is mainly used by Orion (Super Megaforce Silver) who uses it to fight as the Lunar Wolf Ranger.