"We're like one big Zord, like a Mamazord. No, no, no that sounds lame. Um....a Megazord!"
―Billy Cranston after the Zords become one[src]

The Megazord is the combination of the five Battle Zords: T-Rex, Pterodactyl, Mastodon, Triceratops, and Sabertooth.

The Megazord has jet thrusters on its feet, retractable wings that can transform into twin Power Swords, twin cannons on its left wrist and a blade that can extend on its right wrist. The cockpits are located in the upper chest, the shoulders, and the upper thighs.

The Zords are alien battle vehicles that have taken on the form of the most powerful beasts on the world they landed- in this case Cenozoic Era Earth. However, out of five Zords, three of them, which are Pterodactyl Battle Zord, Tyrannosaurus Battle Zord, and Triceratops Battle Zords, are actually based after three animals that lived during Mesozoic Era instead. It was because the last generations of animals the three Zords were modeled after thrived long enough for Rangers' ship's systems and Morphing Grid to collect enough data to construct those Zords after them. They are very powerful but hard to control. A Ranger must have full access to their morphing capability in order to interface with the Zord, becoming one with them. This is due to the cockpits of the Zords connecting to the Rangers via a cord that connects to their spines through their armor, forming a neural interface of sorts, which is in compliance with how Alpha described the Rangers requiring their armor to become one with their Zords.

According to the novelization of the film, it normally takes years of training for the Rangers to combine their Zords. This shows the depth of Jason's team's skills in being able to form the Megazord in the heat of battle after only eleven days of training and arguably less than an hour piloting the Zords. In fact, they managed to win the battle in spite of only able to utilize some of their Zords' arsenals.

While the Megazord is modeled after 5 of most powerful animals on Earth, the Zords themselves retain much of its alien elements in its design and aesthetics unlike their mainstream counterparts. This best displayed in the appearance of Mastodon and Triceratops Battle Zords, which looked like hybrids of animals in question and alien insect through their multiple legs.

Originally used by Zordon and his team of Rangers, Alpha 5 shows them to the new Power Rangers to motivate them but warns that they will not be able to access it without the ability to morph. Zack Taylor still tries and is overpowered by his Mastodon Battle Zord, nearly crashing into civilians before crashing back into the command ship.

When the Rangers learn to morph, Zack once more initiates the use of the Mastodon and finds himself in complete control, demolishing Putties in battle. The other Rangers follow suit and make use of their full arsenal to destroy the Putties and try and hold back Goldar.

After Goldar conjures a sword, the Megazord counters by moving out of the way, picking up Goldar from behind, and throwing him to the ground. It then impales Goldar with its Power Swords, destroying him. Rita, refusing Jason's offer to be judged by Zordon, lunges at the Megazord, which slaps Rita into space.

Red Ranger
The Red Ranger's Zord. It makes up the upper body and arms of the Megazord. Being modeled after the extinct Tyrannosaurus Rex, the Zord can vanquish the enemies by either trampling them or chomping them with its powerful jaws in addition of a pair of twin energy cannons installed in place of where its arms should be.

Black Ranger
The Black Ranger's Zord. It makes up the right leg of the Megazord. The Zord possesses durable armor which, combined to its sheer bulk, can ram through any obstacles with considerable raw brute force. The Zord is also deceptively fast in spite of its size thanks to its insectoid front legs. In place of its trunks and tusks are energy cannons.

Blue Ranger
The Blue Ranger's Zord. It makes up the knees, the left leg, and the feet of the Megazord. Modeled after a Triceratops, it can use its horned face and bulk to ram through obstacles and foes like a battering ram. It's also deceptively fast thanks to its insectoid front legs. In addition of built-in energy cannons installed on its large horns, the Zord also has a number of arsenals in disposal which include generating a blue energy shockwave, a weapon Billy hastily used to fatally injure Rita Repulsa.

Yellow Ranger
The Yellow Ranger's Zord, which forms the lower torso, the waist and the hips of the Megazord. This Zord is very fast and agile much like the extinct Sabertooth cats. It possesses a pair of energy cannons on both sides of its head.

Pink Ranger
The Pink Ranger's Zord, which becomes the Megazord's head and back. The wings also turn into the Megazord's Power Swords. The Pterodactyl Battle Zord also possesses a series of magnetic grapples on its undercarriage, allowing it to lift the likes of the Triceratops Battle Zord with little effort. It possesses built-in twin energy cannons in its wings. 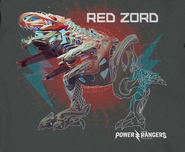 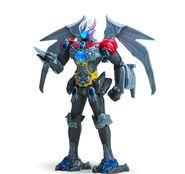 Side view of the T-Rex Battle Zord

Side view of the Triceratops Battle Zord

Side view of the Pterodactyl Battle Zord

Side of the Sabertooth Battle Zord

Side view of the Mastodon Battle Zord