Daizyujin was released in Japan with accurate stickers and a chrome sword. The mecha was show-accurate with the ability to go from tank mode to robo mode. It included cannons and a sword.

Megazord was a rerelease of the Zyuranger Daizyujin. This was rereleased in the Mighty Morphin Power Rangers line with new decals. The "Megazord" Toy was released in the Fall of 1993. The toy featured several unusual decal changes, most of which involved changing the red decals found on the Sabre-Tooth Tiger to a dull cyan.

The deluxe version also saw a special black repaint release. It had gold decals. In either form, the decals follow the show-accurate designs. As a Power Rangers toy it was released as Special Edition Megazord.

The black and gold version

The special edition box
Add a photo to this gallery

In 2010, a new mold to go with the toyline for the remastered series was released, with some conversion modifications, as well as the ability to combine with non-canon toy-exclusive vehicles. The new mold is noticeable more simple compared to the original toy, such as combining previous multiple parts, as well as being much smaller. Due to this, it is not compatible with the Dragonzord or Titanus from the 1993 toyline, though it can, however, combine with any of the other Megazords released in the Zord Builder toy line. The 2010 release officially renamed the mecha to "Dino Megazord" so as to set it apart from other Megazords. They also made the stickers accurate to the show. Unfortunately, the 2010 Megazord lacks too much detail from the original 1992/1993 Megazord. Examples include: The tip of the tail on the Tyrannosaurus does not collapse, The tusks on the Mastodon can not go up and down, the wheels on the Triceratops and Saber-Toothed Tiger are hollow and can not move, the tail guns on the Triceratops can not move, and the back of the Megazord's arms are hollow and need to be swapped when combing the zords into the Tank Mode. Also, all of the chrome is not present.

This version of the toy was rereleased again in 2013 as the Legacy Megazord for the Power Rangers 20 toyline. This version of the toy uses the same mold as the 2010 toy, though it has diecast metal parts, chrome parts, accurately painted details, a hard plastic chrome sword like 1992's Daizyunjin and the 1993 Megazord, and package that replicates the original 1993 Megazord's packaging. The Legacy Megazord box has stats which include the following- Height: 333 ft.; Weight: 172,000 lbs.; Power: 50,000 megavolts; Weapons: Titanium Power Sword, Laser Emitting Eyes, Mammoth Shield, Power Punch Missiles, Thunder Cannons, and Pterodactyl Chest Plate. Both the 2010 & 2013 releases are compatible with the 2014 release of Dragonzord and Titanus.

The Legacy Megazord was reissued for 2015. The major changes include stickers being already applied to the mold, the handle of the Power Sword fitting much easier into the fists and the box containing minor alterations. 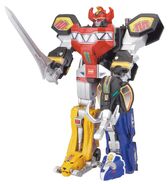 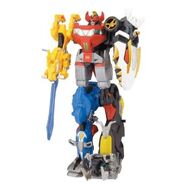 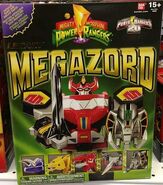 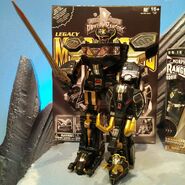 Black Legacy Megazord
Add a photo to this gallery

At Power Morphicon a Soul of Chogokin version of Daizyujin/Megazord was announced with the individual zords shown while at NYCC 2016 the full combined form was shown. It was released in April 2017. Just like the original DX & the 2010/Legacy releases it's able to combine to form the tank mode and Megazord. Unlike the previous releases the Tyrannosaurus, Mastodon, Triceratops, & Sabertooth Tiger have a ton of articulation like fully articulated legs, the Triceratops has detachable horns with chains just like in both shows, the Mastodon has a fully articulated trunk and shoulder panels covering the legs, the Tyrannosaurus has 3d mouth blasters, fully articulated arms & tail, & the Triceratops and Sabertooth Tiger have opening mouths which all previous releases lacked, and movable wheels just like the original DX releases. It's not compatible with the Legacy Dragonzord or Titanus. The individual zords resemble the scale models used in footage in both Zyuranger & MMPR S1 and the Tyrannosaurus also resembles the suit used during stand-alone fights with monsters while the like 2010 Dino Megazord/all releases of the Legacy Megazord when in Megazord mode resembles the suit used in both shows. The Pterodactyl also like the previous releases can also use the cannons as feet. This release is also not zord builder compatible nor is compatible with the original releases either. The Big wheels on the Sabertooth Tiger's front legs don't move. 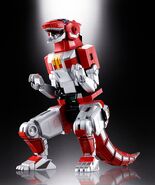 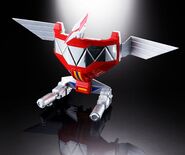 Triceratops Dinozord firing one of its horns 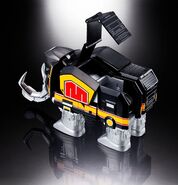 Mastodon Dinozord with one of its shoulder panels opened 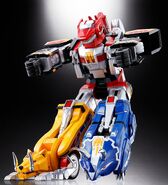 The Plastic Model Kit of Megazord was by released per individual zords. The plastic used was only grey, red, yellow and blue. The set had complete show-accurate decals. The transformation to Megazord mode was identical to the deluxe release except that the Tyrannosaurus and Megazord heads were interchangeable (instead of hinged to each other), and the Mastodon legs and Megazord arms were also interchangeable (as opposed to being two sides of a spin-joint). It also lacked the cannons.

Boxes
Add a photo to this gallery

Dino Megazord was released with a Red Ranger figure for the Mix & Morph subline of the MMPR toyline. The figure could separate at the head, arms, and waist to form other combos with other Megazords from the line, or even the Rangers.

It was later rereleased in the Mix & Morph Megazord pack with all the other Megazords in the line.

Daizyujin was released as part of the Joint Gattai series of fully interchangeable mecha parts. It can combine with any other Joint Gattai mecha, similar to Mugenbine.

Daizyujin parts
Add a photo to this gallery

The Puradera[1] Megazord was designed to look a bit closer to the screen version. The Tyrannosaurus, Mastodon and Pterodactyl parts do not transform. The Sabertooth Tiger and Triceratops can be removed to form simplified versions of the zord forms.

Under Power Rangers, it was not marketed as 'Special Size', however, it fell under the same category of toys as those that followed it. It was also released with decals matching the Deluxe version. 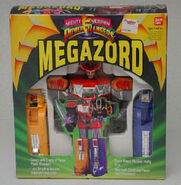 Special Size
Add a photo to this gallery

A 14-inch moving version of the Megazord with sounds. It is battery-operated and can be controlled with a wire stick.

The Megazord has lights and sounds. A design flaw is that its shoulderpads are down instead of up.

Part of Bandai's Skybots line, the Air Attack Megazord is fully infrared radio controlled. It flies forward, up, down left and right. Rechargeable through transmitter. The Megazord stands at 7-inches and has twin propellers.

Part of the SHFiguarts Gignatic Series a 15-inch Daizyujin was released in July 2016. It resembles the suit used in the show, comes with 2 sets of interchangeable hands one set which are default on the figure are the fists and the hands for holding the god horn & mammoth shield, the god horn, the mammoth shield, and a display stand. The articulation is limited to the hands, arms, & head and doesn't transform at all. 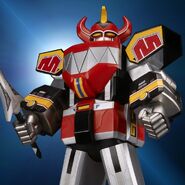 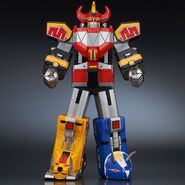 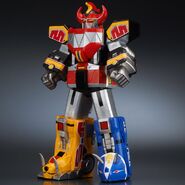 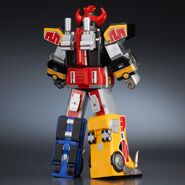 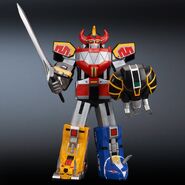 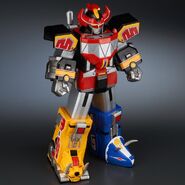 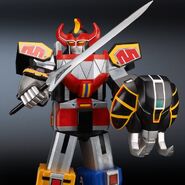 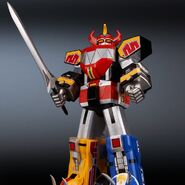 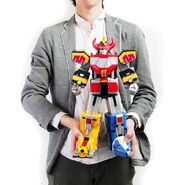 Action figures have no transformation or combiner capabilities. However they have points of articulation for multiple poses.

Daizyujin got a Super Robot Chogokin release in 2012. It is a semi-stylized take on the mecha with accurate detailing. In the series, Daizyujin is the only figure released without any form of Gokaiger counterpart.

The figure also comes with a sword and Mammoth shield. The North American version came out a month after the original Japanese release as the Megazord. The packaging was identical to its Japanese counterpart minus the Zyuranger logos & replaced with the MMPR logos this was released as part of the 20th anniversary of the Power Rangers.

As part of the Legacy collection for each power rangers season which features a piece to build a megazord the MMPR rangers each have a piece to form their Megazord. Currently only the Red Ranger comes with the upper torso released as part of wave 1 alongside the Green Ranger & the Ninja Storm Ranger team, the Pink Ranger comes with the right arm, the Black Ranger comes with the left arm, the Blue Ranger comes with the left leg which are wave 2 which were released alongside the red & yellow space rangers, & last the Yellow Ranger will come with the right leg as part of wave 3. Only the former are available at the moment while the latter will be released in 2017. At Power Morphicon a black and gold version in the style similar to the DX Black and Gold Daizyujin, Deluxe Special Edition Megazord, and Black & Gold Legacy Megazord was released as a limited edition item while the power sword for the Megazord came with the SDCC release of the Red Ranger.

A 2-inch figurine of Megazord was released in a 4-pack of mini-figures along with a Dragonzord and two pre-posed Red Ranger figures.

Also mini-versions of Mastodon, Triceratops, Tyrannosaurus and Pterodactyl were released in a 4-pack.

The Megazord and its components were released in the Micro Machines line.

Coinciding with the Dairanger release, Daizyujin was released as the #01 in the Robo Sentai Collection line. The figure had a die-cast (chogokin) body and movable plastic arms. A gold variant was also released.

The reversioned MMPR also brought with it a series of super-deformed figures. The Dino Megazord was one of them and it was released with a Dragon Shield Red Ranger figure.

Daizyujin was released as a Gashapon figure in the Advanced Super Sentai World (ガシャポンＨＧ スーパー戦隊アドバンスドワールド ) line with a stylized look sporting a freed Tyranno tail.

Daizyujin was released as an SD keychain figurine alongside other sentai robos in the premiere series of Super Sentai Robo Figures Keychains (スーパー戦隊ロボ フィギュアキーホルダー ). Subsequent releases from other lines could also be included.

Retrieved from "https://powerrangers.fandom.com/wiki/Megazord/toys?oldid=743639"
Community content is available under CC-BY-SA unless otherwise noted.