"My prey... My dream!"
―Bangray's final words before his death[src]

Megabeast Hunter Bangray (巨獣ハンターバングレイ, Kyojū Hantā Bangurei) is a hunter and had already hunted 99 Megabeasts for fun, and he targeted Earth for his 100th hunt, which in fact turned out to be Cube Whale. Later he was recruited by Ginis to join the Space Outlaws Deathgalien, but refused.

He is a galactic hunter who came to earth. He later joins the Deathgalien.

Bangray attacks Yamato Kazakiri and "revives" his mother by scanning his memory of her. He later kills Yamato's mother to make a fool out of him and put him into a deep despair. Later, Yamato actually realizes that his memory of his mother is a moment that he will never forget and then, as Zyuoh Eagle, charges at Bangray for messing with his memory. After that, Bangray takes his leave but not before "reviving" and enlarging Amigard and Trumpus by scanning Zyuoh Shark's memory of them.

After "impressing" Genis with his abilities, Bangray refused to join the Deathgalien. He later interrupted Quval's Blood Game and fought him. During the fight, Bangray reveals to Quval that he knows a little about his past. As they engaged, Bangray offers to help Quval kill Ginis for destroying the latter's planet only if he helps him search for what he's looking for.

Bangray targeted Yamato's old friend Daichi Hayashi and his now-wife Yui as reassurance that Yamato will fall into despair if he killed them. The rest of the Zyuohgers tried to keep him away but he defeated them all before Yamato finds out his plan and fights him as Zyuoh Gorilla. Bangray later escapes the fight and gets to Daichi and Yui but not before "reviving" Yabiker by scanning Leo's memory of him. After Zyuoh Gorilla defeats Yabiker, he changes to Zyuoh Eagle Instinct Awakened to fight Bangray and save Daichi and Yui. Bangray takes his leave but not before "reviving" and enlarging Halbergoi by scanning Zyuoh Eagle's memory of him.

TV STORY-Ep. 26: I Want to Protect the Precious Day

Having failed again to break Yamato, Bangray enacted a sadistic game to challenge the Zyuohger team as a whole. Ambushing Sela and Tusk on their way home from shopping, Bangray easily defeated the two Zyuohgers, knocking them unconscious before proceeding to create a copy of the pair from their own memories. With the others catching up to them, the Zyuohgers were faced with two pairs of Sela and Tusk who had all been fitted with irremovable chest braces. Before taking his leave, Bangray explained that the braces were bombs that could not be physically removed without detonating, with the only way to save the real ones being to terminate the imposters lest the bombs detonate in half an hour. Bangray figured that the Zyuohgers would be able to catch the fakes, but this was all part of his plan as that would be when the "real hell" came. Sure enough, the fake pair, who were well aware of their true nature, were eventually found out due to their memory being too precise, but the Zyuohgers revealed that they were stalling to find a way to save both pairs due to being unwilling to hurt their friends even if they were fake. Ultimately, as detonation approached, the fake Sela and Tusk chose to sacrifice their own existence to save their original counterparts. Realizing that the imposters still had feelings and a right to live, the Zyuohgers were deeply disgusted by this game which made them all the more determined to take down Bangray.

While he was attacking people, he noticed a bowl of curry on a table and was about to dig in, but was stopped by none other than Captain Marvelous. Marvelous transformed into Gokai Red and fought him just as the Zyuohgers join in the fight. He quickly retreats but not before scanning Amu's memory to create a copy of Dorobozu to follow the heroes without being noticed. He followed them to the Link Cube where they discovered the Great King's Credential where a hologram of the Zyuman's Ancestor, Cetus told them the history of Zyuland and Cube Whale. Bangrary appears revealing that he came to Earth to hunt for Cube Whale and intends to steal the Great King's Credential to summon it. He later engages in fighting the Zyuohger with Marvelous intending to take the Great King Credential for himself. After Marvelous flew away with it with Yamato chasing after him, Bangrary summons Bowguns from Amu's memory to keep the Zyuohger distracted while he goes after them.

Bangray eventually found the location of Cube Whale after scanning the memories of a TV crew. He later encountered the Zyuohgers who were also there to search for Cube Whale and overwhelms them. When Yamato transforms into ZyuohWhale, water shot from the ocean revealing it to be Cube Whale. Bangray jumps into the ocean to go after it with Yamato following. Upon getting near it, Cube Whale swats both Yamato and Bangray into the air. He was later met by Quval who came up with the plan dump poison into the ocean to lure Cube Whale by using Bangray's ship. While Sela and Misao were searching for Cube Whale and were infected by the poison, Bangray summons copies of Gaburio, Hanayaida and a giant sized Illusion to prevent the Zyuohgers from interfering. Leo, Tusk and Amu fought Illusion with Zyuohwild Special while Yamato fought Bangray and the two copies. After destroying the 3 players, Cube Whale comes out purifying the poison. Suddenly, an army of Triangulars ordered by Ginis to capture Cube Whale launches a surprise attack on the Zyuohgers, Bangray and Cube Whale with Naria arriving blasting a tracker on Cube Whale. After destorying all the Triangulars, Cube Whale attacks both the Zyuohgers and Bangray with Naria quickly retreating.

Meeting up with Quval, Bangray scolds him for not knowing Ginis's plan to capture his prey, but Quval reveals the location of Cube Whale. Bangray later found Cube Whale along with Yamato who was talking to Cube Whale. He later engages against Yamato while the other Zyuohgers fought against Gift Custom piloted by Naria. After seeing Yamato's desire to protect him, Cube Whale accepted him and grants him the Kai-Oh Spear to overpower Bangray and send him flying.

Having recovered from his injuries after his last fight with Yamato, Bangray later created giant copies of Quval's players in an attempt to lure Cube Whale, but was disappointed when it didn't come as the Zyuohgers knew of his plan. He later met up with Quval that night discussing their next plan to capture Cube Whale. Bangray returns the next day and fought the Zyuohgers who are wearing animal models on their heads to prevent him from creating a copy of a Deathgalian player. During the fight, the Zyuohgers had a fake Cube Whale with them to fool him and lure him to where Zyuoh the World was waiting to deliver a finishing blow. However, knowing they would come up with a plan to fool him, Bangray created evil copies of the Zyuohgers from Quval's memory to keep Misao and the Zyumans busy from helping Yamato. Although Yamato was able to defeat four of the copies, the evil ZyuohGorilla's strength proved too be to much for him and he was defeated. The Zyumans and Misao arrived to late to save Yamato who was then kidnapped by Bangray and Quval.

Bangray held Yamato captive at a warehouse with Zyuoh Gorilla brutally assualting him. He called his friends for a deal to trade Yamato for Cube Whale at Mutsume Valley. Bangray and Zyuoh Gorilla went to the valley with Yamato tied up and his mouth tied so he wouldn't reveal his plan to his friends. When they arrived bringing Cube Whale with them, Bangray ordered them to toss their Zyuoh Changers and Zyuoh the Light. Amu walks up to Bangray and gives Cube Whale which the latter knocks her off. However, Bangray had no intention on giving Yamato back and Quval blasts a laser from space annihilating them in front of Yamato who screams in horror having witnessed the death of his friends. Before Bangray can kill both Yamato and Cube Whale, the Zyuohgers came out through the mountains fighting Bangray and freeing their friends as they knew Bangray wouldn't keep his promise and had Cube Mogura drill them a hole to escape from the blast when they notice Quval's absence. Bangray later fights them with an army of Moebas and Zyuoh Gorilla to aid him but they were both defeated. When he requested Quval's assistance, Quval severs his right hand off, handed Bangray a Continue coin, and left. Bangray enlarged himself, but the Zyuohgers formed the final combination, Doubutsu Dai Gattai Wild Tousai Dodeka King, and destroyed him with it’s Wild Tousai Dodeka King's Zyuoh Dynamite Stream.

Following Bangray's death, Quval would make use of his hand that he had taken for himself. Initially testing its power by making use of memory constructs in his mind games with the Zyuohgers,

TV STORY-Ep. 40: Men's Aesthetics Quval exploited its powers of replication to their full potential in his final plan to use the Zyuohgers to betray and destroy Ginis, who was responsible for the destruction of his home planet. Ultimately, however, the plan was shattered when Ginis, seeing through Quval, stepped in personally and revealed his immensely intimidating true power.

TV STORY-Ep. 41: The First and The Last Chance In a final bid for survival by earning Ginis' mercy, Quval proceeded on a final offensive to destroy all life on Earth only to be stopped by the Zyuohgers who destroyed Quval and the hand of Bangray along with him.

TV STORY-Ep. 42: The Future of this Planet

Bangray was one of five villains who were revived by Gillmarda to fight the Zyuohgers and Ninningers. He engaged and was destroyed by the four heroines, ShiroNinger & MomoNinger as well as Zyuoh Shark & Zyuoh Tiger. 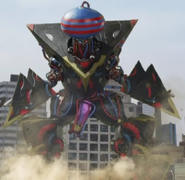