RangerWiki
Register
Don't have an account?
Sign In
Advertisement
in: In Space, Megazord, Zords (In Space),
and 3 more

A Line in the Sand

The Mega Voyager is a Megazord used by the Space Rangers which is formed by combining the 5 Mega Vehicles.

The Mega Voyager is the most powerful Megazord in all of In Space, only ever failing to kill one monster (Tankenstein) but they managed to slay him with his own lance. It has a large arsenal of weapons such as the Astro Megazord Saber, although this was only used against the Body Switcher and was equipped with a set of four laser cannons on its chest-plating called the Mega Laser. Its primary weapon however was the Mega V3 Mega Vehicle in a mode known as Mega V3 Missile Mode which it utilizes in its finishing attack.

Said (unnamed) finishing attack consists of knocking down the enemy and then summoning the Mega V3 missile from the Moon. It would catch it and then aim at the enemy before a Ranger shouts "FIRE!" and then grip the trigger. The weapon would then fire it's tip into the villain with enough force to annihilate them in a massive explosion. In the episode “The Enemy Within”, when powered by the Mega Winger and the Astro Delta Megazord as well as the absorbed energy from the Psycho Rangers' Full Power Blast, it was able to obliterate the Psycho Black, Red, and Yellow Rangers with one hit.

After Andros (incognito, before Darkonda found him out) wins Zordon's Key Cards in a card game with Darkonda and others on Onyx, the Space Rangers locate the Mega Voyager hidden on Ganymede. Made up of a combination of five vehicles: Mega V1 formed the thighs and lower torso. Mega V2 formed the shield and head. Mega V3 formed the legs, upper torso, and the primary weapon. Mega V4 formed the arms and chestplate. Mega V5 formed the feet. The Mega Voyager is thus far the only Megazord combination without the term 'Zord' in its name (It is also, with the Mega Winger, the only Megazords so far that share names with their original Sentai counterparts).

On one occasion, (the Psycho Rangers), Psycho Yellow took control of it by teleporting herself into the Mega Voyager's circuitry.

It was eventually destroyed in battle by Tankenstein after it impaled the monster with his own lance and then he took it and the Rangers into the skies where he self-detonated to try and take them with him. 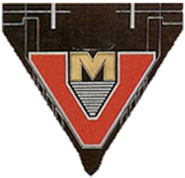 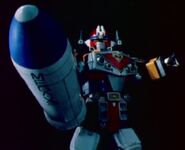 The Mega Vehicles are the Zords of the Space Rangers. These Zords were hidden by Zordon on Jupiter's Moon, in case of emergencies.

Mega V1 is a red zord patterned after an astronaut's spacesuit. It is the personal Mega Vehicle of Andros, the Red Space Ranger. It forms the midsection, waist and upper legs for the Mega Voyager.

It has two missile launchers placed in its shoulders. In the sides of its jet pack was the M emblem of the Space Rangers.

The Mega V1, along with the other Mega Vehicles, was found by the Space Rangers in the Jovian moon of Ganymede. Initially, Andros had difficulty piloting it, but later managed to fully stabilize it. When Mutantrus attacked Andros, he used the Mega-V1's weapons to destroy it. Andros would later combine the Mega-V1 with the other Mega Vehicles to form the Mega Voyager to defeat Darkonda.

The Mega V1 would only once be used for individual combat again (against Lionizer), and every time it was summoned after, it was only to form the Mega Voyager.

Mega V2 is a black zord patterned after a space shuttle. It is the personal zord of Carlos Vallerte the Black Ranger. It forms the head for the Mega Voyager. The body part becomes the shield.

Mega V3 is a blue zord patterned after a rocket. It is the personal zord of T.J. Johnson the Blue Ranger. It forms the lower legs and abdominal area for the Mega Voyager.

Mega V4 is a yellow zord patterned after a UFO. It is the personal zord of Ashley Hammond. It forms the body and arms for the Mega Voyager. Additionally the jet engines also serve as the firing apparatus for Mega Voyager's Mega Laser attack.

The Mega V4 is patterned after a flying saucer. It has two laser cannons on its wings.

Mega V5 is a pink zord patterned after a lunar rover. It is the personal zord of Cassie Chan the Pink Ranger. It forms the feet for the Mega Voyager.