After the defeat of the Unicorn Minosaur, Kleon finds streamer Ui Tatsui videoing the fight and infects her with his slime with the Medusa Minosaur being created from the negative emotions generated by her desire to be seen and acknowledged by others on the internet. The Medusa Minosaur is first seen trying to petrify people in a plaza where it is confronted by Koh, Melto and Asuna who morph and fight it. However, it is a match for them and manages to petrify Koh though Melto saves Asuna from the same fate. Even so, thier inability to look directly at it prevents them from fighting properly though the arrival of Bamba with the MabushiSoul to blind it and prevent a finishing strike. Before he and Towa can attack it however, Drunn Soldiers appear thanks to Kleon not wanting his new creation destroyed. With the Ryusoulgers preoccupied, the Medusa Minosaur leaves which Bamba tries to prevent but the intervention of Tankjoh allows it to retreat and Ui is put into a coma soon after.

Like all Minosaurs, due to being created from pure negative emotion based upon a singular desire, the Medussa Minosaur was only capable of saying "look." 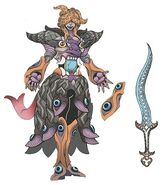