"I don't think so!"
―Mechanizer's final words before his demise.[src]

Mechanizer is a Piranha robot that first appears in the episode "Mr. Billy's Wild Ride".

King Mondo sent Klank to set up an ambush and to destroy the Angel Grove University warehouse if the Rangers got too close to spare fuel cells. Mechanizer attacked Tommy when he split up from the others to find the fuel cell and later attacks the Yellow, Green, Blue and Pink Rangers, the Mechanizer then used his blaster, but he drop it when the warehouse exploded allowing Tanya to blast it. Mechanizer torched the warehouse by blasting several containers of explosive liquid.

He later received the new Plutonium Armor and grew into a giant and battled the Super Zeo Zords 1 and 2 but was destroyed by them both.

Mechanizer is a cold and ruthless entity that only cares about destruction. 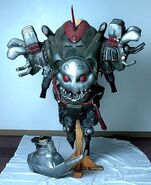