Maya is a tribesgirl from the jungle planet Mirinoi and Galaxy Yellow of the Galaxy Rangers.

She is also referred to as Yellow Galaxy Ranger or Lost Galaxy Yellow Ranger - variations on her in-show label, though the latter is more in reference to the show than a proper label.

Prior to the events that took place in "Quasar Quest", Maya lead a peaceful life on the planet of Mirinoi with her tribe. She, like many others in the village (including her childhood friend, Shondra), grew up listening to the wise man, Jera, retell the legend of the Quasar Sabers, placed in the stone altar 3000 years ago.

As a child, Maya attempted pull the Pink Quasar Saber from the stone to no avail while Shondra tried to pull the Blue Saber to no avail as well. They kept doing it until they developed blisters on their hands.

In the present day of 1999, the planet was attacked by Furio, Scorpius' general, in an attempt to gain possession of the Sabers. An adult Maya fled from her village with the rest of her people perused by Stingwingers. She was eventually chased through a portal that lead her to Earth's moon where she encountered Kai Chen, Kendrix Morgan, Mike and Leo Corbett, citizens of the space colony Terra Venture.

When the Stingwingers emerged from the portal, the four protected her from harm and though she was grateful, she chose to return to Mirinoi to save it from Furio. Mike and Kendrix followed her, choosing to help her despite the risk that they would be left behind. They would later be followed by Leo, Kai and Damon Henderson (a GSA mechanic for the Astro Megaship).

Maya was among the original five who pulled the Sabers from the stone and became the Yellow Galaxy Ranger. Proud of her position as a Ranger, Maya believed that as a team, the group could overcome Scorpius' evil and restore her planet to its original state. Maya is an empath, highly sensitive to the world around her. Her connection with nature allows her to understand everything and everyone around her, particularly the Galactabeasts (an ability she would later teach to Leo). On occasion, she's received clairvoyant dreams or feelings concerning the Lights of Orion, Mike, Kendrix and Trakeena's rise to power after the death of Scorpius.

On top of her emphatic abilities, Maya is also a skilled fighter, fueled by an unwillingness to back down (especially when slighted for her gender) or forced to retreat from battle when she believes she has the upper hand. On more than one occasion, she clashed with Trakeena's general, Deviot, often attacking him first upon arriving on the scene.

She formed a particularly close friendship with both Kendrix and later Karone, who was chosen by her friend to take her place as the Pink Galaxy Ranger after she died.

Maya was seen in archive footage, along with various Rangers and villains, when Austin St. John and Walter Jones related about the Power Rangers' team from Mighty Morphin until the recently Lost Galaxy.

Sometime after Trakeena's defeat during the Galaxy Rangers' final adventure, Maya joined her teammates and the Lightspeed Rangers on the mission to destroy Triskull and Trakeena once and for all. She fought alongside Kelsey Winslow, her Yellow Ranger successor and the Yellow Lightspeed Ranger. She returns to Mirinoi.

Emperor Mavro was defeated, but the remaining thousands of X Borgs still stand. Tommy gathered all the existing Power Rangers, Maya returned with her fellow Galaxy Rangers as part of the army of Legendary Rangers led by Tommy that helped the Mega Rangers defeat the Armada once and for all, fighting in a huge battle against hundreds of X Borgs and dozens of Bruisers. After the demise of the X Borgs, Tommy shook hands with Troy and teleported off along with Maya and the Legendary Rangers. She then once again returns to Mirinoi.

Maya was shown in archive footage, along with the other Galaxy Rangers in Scrozzle's database, when the villains were looking for a past villain to revive with the Reanimizer, and came across Psycho Red. 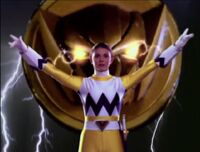 The Galaxy Yellow Ranger Key is Maya's personal Ranger Key. This key along with the majority of the Core Ranger Keys are seen lining the Command Center's interior walls. This key is mainly used by Gia Moran (Super Megaforce Yellow) who uses it to fight as the Yellow Lost Galaxy Ranger.

A skirted version of the Yellow Lost Galaxy Ranger as seen in Super Megaforce.