Matsuri Tatsumi (巽 祭, Tatsumi Matsuri)/GoPink (ゴーピンク, Gō Pinku) is 20 years old (21 in Timeranger vs. GoGoFive and 32 in Gokaiger), the youngest and only daughter of the Tatsumi family and fifth member of the GoGoFive. She works as a National Coast Hospital Paramedic.

A kind-hearted girl, Matsuri is a strong fighter who is very agile and quick. She does not take it kindly when others weaker than her are treated unkindly or in trouble and her temper is deadly when the Saima Family attack innocent people. At times Matsuri is the one that brings order in the household when her brothers and father get out of line.

GoPink is among the Sentai warriors seen in clips when Miku Imamura (MegaPink) lectured Sae Taiga (GaoWhite) about the past female Super Sentai warriors and their shared mastery of disguise and habit of changing their clothing in the blink of an eye, something that Sae had never done before.

Matsuri's appearances in the "Versus Series", GoGoFive vs. Gingaman and Timeranger vs. GoGoFive, are featured in the Super Sentai Versus Series Theater, hosted by the heroes of Tensou Sentai Goseiger. Eri (Gosei Pink) also dresses as Matsuri in the GoGoFive cosplay.

Years later, Matsuri fought alongside not only her own team, but every single Sentai ranger in existence, against the Empire of Zangyack when it attacked the Earth in the Great Legend War. After fighting against hundreds of Gormin and their Sugormin commanders. AkaRanger noticed the fleet moving towards them, he gathered all the Rangers together and gave them the order to sacrifice their powers to wipe out the first invasion's armada. The GoPink powers are later used by Ahim de Famille via the Ranger Keys.

People's Lives are the Future of the Earth

Some time afterward, the Gokaigers are searching for a Greater Power tied to a Sentai team who helps people. While Don, Joe, Gai and Marvelous are preoccupied with helping the elderly and entertaining the affections of a cross dresser, Luka and Ahim inadvertently cross paths with Matsuri when a expecting mother begins to suffer labor pains.

Luka and Ahim help Matsuri get the woman to a taxi, but when they're attacked by Gormin, they transform, allowing Matsuri to get the woman and her daughter to the hospital safely. Later, the two visit the hospital the mother was admitted to and the she informs them that Matsuri is known to the public at large as GoPink. Matsuri was en-route to the hospital (presumably National Seaside) to treat an injured boy when she was attacked once again by the Gormin, this time lead by Basco. Luka and Ahim arrive in time to save her and barricade themselves inside the ambulance. Basco gave Matsuri the choice of coming out peacefully and surrendering her Power to him or being killed.

Matsuri tries repeatedly to give herself up, but is eventually dissuaded by Luka who says the boy will not survive if she leaves him. Ahim uses the Magiranger Ranger Key to duplicate Matsuri's appearance with magic and fools Basco into thinking Matsuri has given herself up when she exits the ambulance, allowing it safe passage to the hospital. After the Gokaigers defeat Basco's monster Meran in battle, Matsuri joined the them in the park with the mother, her newborn child and the little boy to celebrate a safe delivery and recovery.

TV STORY-Ep. 23: People's Lives are the Future of the Earth

After the defeat of Ackdos Gill, Captain Marvelous returned all the Ranger Keys to the former Sentai heroes. It is assumed Matsuri received her Key alongside her older brother Shou, allowing for them and their siblings to utilize their abilities once again.

Matsuri, alongside her team, among the majority of the Super Sentai heroes, was caught up in the "Super Hero Taisen" incident which eventually resulted in the Super Sentai teams and Kamen Riders joining forces to defeat both Dai-Zangyack and Dai-Shocker.

GoPink appeared with her team among the first 38 Super Sentai whom collectively empowered Wild Tousai Shuriken King in its fight against the titanic Gillmarda, granting the Ninningers and Zyuohgers the power to perform the Zyuoh Ninnin Super Sentai Burst which destroyed Gillmarda with the combined power of all 40 Super Sentai.

Matsuri joined the Super Sentai Strongest Battle as a member of Serious Team, but didn’t get to participate in the competition because her team was eliminated after losing the first round against Oddball Team. 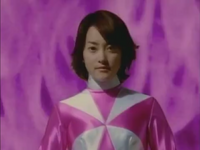 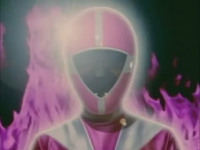 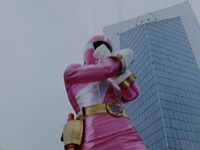 The GoPink Ranger Key (ゴーピンクレンジャーキー, Gō Pinku Renjā Kī) is Matsuri Tatsumi's personal Ranger Key and what became of her powers after she along with the rest of the 34 Super Sentai sacrificed their powers to end the Great Legend War.

This key along with the majority of the Ranger Keys were collected by the Red Pirates and later used by the Gokaigers. The GoPink Ranger Key was mainly used by Ahim de Famille (Gokai Pink), who used it to fight as GoPink.

The GoGoFive keys, along with all the Ranger Keys of the first 33 Super Sentai, were briefly taken by the Black Cross King and turned into Ranger puppets that were fought by the Gokaigers and the Goseigers. Splitting up, the puppet GoPink was defeated as part of a group of surviving Pink and White warrior keys by Gokai Pink and Super Gosei Pink.

After Zangyack were finally defeated, the Gokaigers gave the Ranger Keys back to their rightful owners. Matsuri received her key and became GoPink once more.

Matsuri Tatsumi/GoPink: to be added

GoPink is among the vast pantheon of Rangers which are available in the mobile game Super Sentai Battle Base.

GoPink appears with her team among all Sentai in the mobile game Super Sentai Legend Wars.