Matoi Tatsumi (巽 纏, Tatsumi Matoi) is GoRed (ゴーレッド, Gō Reddo), the eldest son and the leader of the team. He is the Captain of the Capital Fire Department Rescue Squad.

He is 24 years old (36 in Gokaiger) and takes his duties as a leader and as the eldest brother very seriously. He never backs down from a fight no matter how difficult it might be. At times he yells at his younger siblings for messing up for him. Matoi does everything by the book with no room for messing up.

Since he was the one that practically raised his younger brothers and sister, he feels very much responsible for them. He is their "father" and brother rolled up in one.

He gets into a lot of arguments with Shou Tatsumi. He might argue with his siblings quite a bit but that's only because he loves them and wants them to be the best they can be. He was also the one who came up with the team's battle cry.

GoRed is among the Sentai warriors seen in clips when Yuusuke Amamiya (Red Falcon) lectured Gaku Washio (GaoYellow) about the past Sentai sword experts, showing him that the true sword wasn't the sharpest, but the one that feeds on courage.

Led by his Liveman predecessor Red Falcon, he appeared as one of 24 previous Red Rangers in Gaoranger vs. Super Sentai together with fellow Red Rangers from his predecessors AkaRanger to GingaRed to his successor TimeRed. He had no interactions with his younger brother Daimon, who also appeared, but alongside the Dream Sentai instead.

As the twenty-third Red, GoRed's Red Warrior Spirit was embodied by AkaRed.

Matoi's appearances in the "Versus Series", Kyukyu Sentai GoGoFive vs. Gingaman and Mirai Sentai Timeranger vs. GoGoFive, are featured in the Super Sentai Versus Series Theater, hosted by the heroes of Tensou Sentai Goseiger. Alata (Gosei Red) also dresses as Matoi in the GoGoFive cosplay.

Years later, Matoi fought alongside not only his own team/siblings, but every single Sentai ranger in existence, against the Empire of Zangyack when it attacked the Earth in the Great Legend War. He was seen as one of the Reds to first engage a Sugormin. After fighting against hundreds of Gormin and their Sugormin commanders. Kaijou noticed the fleet moving towards them, he gathered all the Rangers together and gave them the order to sacrifice their powers to wipe out the first invasion's armada. The GoRed powers are later used by Captain Marvelous via the Ranger Keys.

After the defeat of Ackdos Gill, Captain Marvelous returned all the Ranger Keys to the former Sentai heroes. It is assumed Matoi received his key alongside his younger brother Shou, allowing for the Tatsumi family to utilize their abilities once again.

Matoi, alongside his team, among the majority of the Super Sentai heroes, was caught up in the "Super Hero Taisen" incident which eventually resulted in the Super Sentai teams and Kamen Riders joining forces to defeat both Dai-Zangyack and Dai-Shocker. During the final battle, he is seen fighting a Dogormin with GoYellow.

GoRed appeared as part of a conference of the first 38 Reds led by Red Falcon, whom addressed the Ninningers and Zyuohgers as the greater Super Sentai pantheon intervened to save them from defeat at the hands of the titanic Gillmarda. Empowering the Combination Nin Shuriken to form Wild Tousai Shuriken King, the first 38 Super Sentai further imbued their successors with the power to perform the Zyuoh Ninnin Super Sentai Burst, destroying Gillmarda with the combined power of all 40 Super Sentai.

Matoi joined the Super Sentai Strongest Battle as a member of Leader Team. It’s unknown whether he participated in any of the matches, but his team lost the third round against the Martial Artist Team.

Matoi alongside with his Sentai Red Ranger predecessors appeared to help the Zenkaigers.

During the climatic final battle itself, he can be seen fighting alongside Kamen Rider 2, DynaRed and Kamen Rider J.

Though initially awkward and coming across as a goofball, Matoi does good by his family and the greater good by having a completely selfless and unwavering sense of justice that doesn't back down, even in the face of incredible danger. He consistently puts himself on the line if it means that he saves his siblings, or civilians who are caught in the crossfire. Over time, his selflessness grows further and further. Even after the resurrected Zylpheeza and Salamandes destroyed the Max Victory Robo as Matoi was piloting it during Grandienne's last and largest attack on Earth, he still fights back by shooting at the giants with only his sidearms, giving Nagare and Shou enough time to each pilot Grand Liner and Victory Mars. It was with this raw emotional energy, love for both his family and the Earth, and willpower that guided the team into powering the Max Victory Robo Black Version to defeat the Destruction Gods. 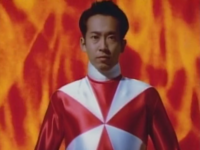 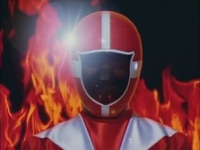 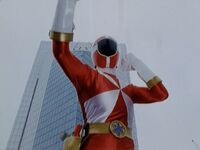 As evoked by his father, Matoi gets his name from the matoi (纏, matoi, まとい), a type of flag used in Edo period Japan by firemen to notify people of a fire near or within a building.

The GoRed Ranger Key (ゴーレッドレンジャーキー, Gō Reddo Renjā Kī) is Matoi Tatsumi's personal Ranger Key and what became of his powers after he along with the rest of the 34 Super Sentai sacrificed their powers to end the Great Legend War.

This key along with the majority of the Ranger Keys were collected by the Red Pirates and later used by the Gokaigers. The GoRed Ranger Key was mainly used by Captain Marvelous (Gokai Red), who used it to fight as GoRed. It was also used by Gai Ikari on one occasion.

The GoGoFive keys, along with all the Ranger Keys of the first 33 Super Sentai, were briefly taken by the Black Cross King and turned into Ranger puppets that were fought by the Gokaigers and the Goseigers. Splitting up, the puppet GoRed was defeated as part of a group of surviving Red warrior keys by Gokai Red and Super Gosei Red.

After Zangyack were finally defeated, the Gokaigers gave the Ranger Keys back to their rightful owners. Matoi received his key and became GoRed once more.

A GoGoFive Zyudenchi which bears the likeness of GoRed is part of the Legend Sentai Zyudenchi toyline which can be used in Super Sentai Battle: Dice-O.

Matoi Tatsumi/GoRed: to be added

GoRed is among the vast pantheon of Rangers which are available in the mobile game Super Sentai Battle Base.

GoRed appears with his team among all Sentai in the mobile game Super Sentai Legend Wars.