Earth (World of the Coinless

Mastodon Sentries are foot soldiers who enforce the order of Lord Drakkon in the dystopic alternate timeline universe he rules over. They are the primary foot soldiers of the Ranger Sentries, utilized in policing cites and in military operations as ground/paratrooper infantry.

Rita Repulsa used propaganda and sheer brute force to slowly conquer Earth with the help of her loyal Green Ranger. Soon people began to believe that Rita was a leader who could bring about change for the better under her rule despite all the destruction she caused. One of the byproducts of that after the fall of the Power Rangers was the Mastodon Sentries, loyal soldiers who wear mass produced Ranger-like armor which resembles a twisted and militaristic version of the Black Ranger.

Patrolling Historic Angel Grove after curfew, a single Mastodon Sentry confronted the Billy Cranston and Tommy Oliver who had came from another reality. Spotting the Dragon Dagger on Tommy's person, the Sentry attempted to apprehend them only to be eluded, proceeding to call for assistance from their fellow Sentries as an "Alpha Alert" was declared. Three more Sentries arrived to pursue the duo but soon lost them, with the combined quartet deciding that it was necessary to inform their Lord Drakkon of the incident.

Soon after, Lord Drakkon, backed up by Mastodon Sentries on ground and in the air, intercepted Tommy and Billy after their recovered Saba. Mighty Morphin Power Rangers (Boom! Studios) Issue 11 However, Saba provided an opening for the pair when he brought forth the White Tigerzord from the Zord Graveyard, allowing them to escape in the White Ninja Falconzord. Mighty Morphin Power Rangers (Boom! Studios) Issue 12

In his throne room, Lord Drakkon received a report from the Mastodon Sentries that, despite having scoured the Northern Border, they were unable to find the Falconzord and surmised that the intruders had cloaked it. Lord Drakkon was well aware where they would be heading, but turned his attention to the Sabertooth Sentry who commanded the squad that were eluded by the intruders. Refusing to stand for ineptitude risking the coming battle, Lord Drakkon had her Sabertooth powers painfully revoked before ordering her taken from his sight with Sentry Jax replacing her as head of the battalion ready to begin an assault on the Coinless by day's end.

Tracing Saba through his connection to the Morphing Grid, Lord Drakkon realized that they had joined with the Coinless as he overlooked his vast army of Sentries, predicting that the coming battle would eliminate all his enemies. Meanwhile, the amassing Sentries were discreetly observed by spies from the Coinless, who warned the resistance movement of an imminent assault. In total, the army consisted of hundreds of Mastodons with a two dozen of Sabertooths and Pterodactyl Sentries. Mighty Morphin Power Rangers (Boom! Studios) Issue 13

Making matters worse for the Coinless, a Morph Shield Generator was damaged in the initial blasts, ever-increasing the hole to the point that the Sentries' Dragon Tanks could get through it. Meanwhile, the connection to the pulse cannons were damaged, requiring them to be reset by hand. As work began to repair the defenses, the other Tommy Oliver offered his assistance in clearing a path to reset the cannons.

Leading the fight personally against the Mastodons, Zack Taylor and his forces were overpowered by Scorpina and her Tyrannosaurus Sentries. Meanwhile, Tommy summoned the Falconzord again, engaging in a dogfight with the Mastodons' aerial vehicles to cover the Coinless members only to see them shot down by the Pterodactyls. The attack took a turn for the worst for the Coinless when Lord Drakkon attacked and forced Tommy out of the Falconzord, rendering him along with Zack at his mercy. Sentencing his doppelganger to death, Lord Drakkon demanded that the Coinless surrender "the Relic", the Power Morpher and Coin of the late Blue Ranger. Mighty Morphin Power Rangers (Boom! Studios) Issue 14

Numerous Mastodons were part of a massive army of Ranger Sentries led by Lord Drakkon in the opening battle of the Grand Campaign: an assault on the Samurai Rangers' Shiba House as the samurai were training. Overwhelmed and caught completely off-guard, the Samurai Rangers did not last long before being de-powered by the Sentries' Dragon Cannon with only the Red Samurai Ranger, Lauren Shiba, escaping. Those left behind, however, were taken captive with their Samuraizers confiscated by the Sentries who handed them to Lord Drakkon. As the Shiba House was occupied by Drakkon's forces, Lauren Shiba was being pursued by the Mastodon Sentries when she was retrieved by Time Force Pink and the Mighty Morphin Power Rangers, who countered the Sentries' Dragon Cannon with the Morph EMP before departing via teleport. Mighty Morphin Power Rangers (Boom! Studios) Issue 26 Mighty Morphin Power Rangers (Boom! Studios) FCBD 2018 Special

In the world of SPD, several Mastodons were among the army of Ranger Sentries which were led by Lord Drakkon in an assault against Space Patrol Delta's Delta Base. Though opposed by the SPD Rangers, a single shot from a cannon of the Sentries' caused the Shadow Ranger and his B-Squad Rangers to demorph, forcing them to retreat to Base with the C-Squad cadets. The tide was turned, however, when C-Squad cadet Konchu manually opened a compromised bulkhead as his fellow cadets and officers fought the Sentries without morphers. Soon after, the gigantic R.I.C. 3.0 was unleashed just in time to blast back against Drakkon and his forces, forcing them to return home.

At least two Tyrannosaurus Sentries accompanied Lord Drakkon as he invaded the Astro Megaship to seize an Astro Morpher. They were resisted by the Space Rangers.

At least one Mastodon Sentry accompanied Lord Drakkon as he invaded the world of Ninja Steel, seeking a Ninja Battle Morpher. The Sentry was no match for Ninja Steel Red. Though they were forced to fall back after encountering resistance from the Ninja Rangers, Drakkon was able to obtain a piece of Ninja Steel Red's Power Star. Mighty Morphin Power Rangers 2018 Annual

Back in the World of the Coinless, a pair of Mastodon Sentries, overseen by a Sabertooth, were assigned to interogate Zack Taylor, the captured leader of the Coinless. They had no success before being soon relieved by a Tyrannosaurus Sentry, who was actually a spy from the Coinless who proceeded to set Zack free. As the Grand Campaign continued, numerous Mastodon Sentries participated in attacks on the Rangers from Lost Galaxy, Ninja Steel, Dino Thunder, Dino Charge, In Space, Lightspeed Rescue, Jungle Fury, to SPD.

In the advance against Corinth, the line against the Ranger Sentries was held by the Ranger Operators for least eight hours as Doctor K was able to counteract the effects of their Black Dragon Cannons after one was salvaged by Ranger Green. Following the intervention of Jason Lee Scott's Tyrannosaurus Dinozord, the Sentries were overwhelmed and forced to fall back only for their place to be taken by reinforcements led personally by Lord Drakkon. Mighty Morphin Power Rangers (Boom! Studios) Issue 27

Numerous Mastodons were among the army of Ranger Sentries whom defended Drakkon's Tower on the Moon against the amassed army of Power Rangers. Mighty Morphin Power Rangers (Boom! Studios) Issue 30 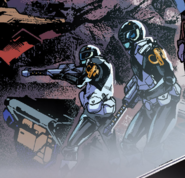 Official Bio of the Masatdon Sentry in Power Rangers: Battle for the Grid 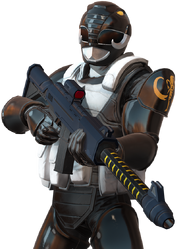 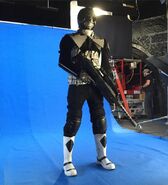 Retrieved from "https://powerrangers.fandom.com/wiki/Mastodon_Sentries?oldid=834862"
Community content is available under CC-BY-SA unless otherwise noted.