1,500,000
A large triple-drill tank with 6 crawler tracks and 2 grabber arms, Drijan is equipped for underground burrowing. Unlike the majority of the Mashin, Drijan lacks a stone mode and instead has a separate Kiramai Stone, the Shining Kiramai Stone (シャイニングキラメイストーン, Shainingu Kiramei Sutōn), inserted as its core. This is necessary for transformation, though it can also transport other Kiramai Stones. Built-in the CARAT workshops, Drijan can burrow at 100 meters per minute, and while combat capable with a rotating wheelhouse, can also transform into GigantDriller for extra offensive abilities. 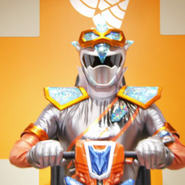 Mashin Drijan is the most powerful out of the core six Mashin, being capable of uprooting entire Jamen Beasts, having a retractable claw arm capable of picking up and throwing Jamen Beasts singlehandidly. On top of the drills across its body, its main attack in its default form is the Wonder Throw attack where it picks up and launches Shovellow at the enemy as it changes into its Mashin mode to deliver a hit with its scoop. It was only shown doing this with Mashin Shovellow however.

Drijan was built for Takamichi by Muryou Hakataminami after Takamichi joined the team after he killed the Meteorite Jamen who had given the team a very hard time. Muryou boasted it to be more advanced than the current Mashin, something that the core 5 took offense to. Drijan was finished in time to face off against Haejigoku Shellga, but when Galza arrived, the Mashin fought off against Smog Jouki instead, leaving Land Mage to finish off the Jamen Beast.

Later, after Tametomo finishes off Whac-A-Mole Jamen with his Kiramai Buster, Takamichi arrives in Drijan with Tametomo and Mashin Shovellow on Drijan to fight Hammer Basra. It takes Hammer Basra in the Wonder Throw attack and the Kiramaigers form Kiramaizin as Drijan keeps the Jamen Beast distracted with multiple stabs to its feet and behind. It then catches the Jamen Beast's hammer head in the its retractable claw arm and spun it in a big circle before throwing it down. However, Hammer Basra bounces right off of the ground due to its hammer being like the novelty ones in the fairground with the bounce-back being enough to stun Kiramaizin. It then smacks around the Giant Robo and Drijan, a single roundhouse swipe of its head taking down the main Kiramagers mecha. Fortunately, with some inspiration from Princess Mabushina, Takamichi uses Drijan's drill to energize and stab Hammer Basra right before it could flatten his Zord. Using advice from Muryou, Takamichi is then able to become a Kiramai Stone and fuse with Drijan to form GigantDriller. With it, Takamichi easily overwhelms and destroys Hammer Basra with the Gigant Crash.

GigantDriller and Kiramaizin showed up with the Kiramagers apparently having a plan which amounts to “overload the Yodon Mask with so much energy that it would implode.” Kiramaizin fires its Mach Beam at full power and punchs with Mashin Shovellow which seemed to surprise Yodon that they found his weakness but was unaffected and kicked it away anyway. Mashin Helico holds him at bay with a tornado whilst Mashin Jetter performs the Kiramai Dynamic but two slashes have no effect and Emperor Yodon catches the Jetter Sword on the third. This proves to be a ruse for GigantDriller to jump in and drill him in the mask with its Driller Knuckle which manages to finally knock down Emperor Yodon but it still doesnn’t as much as scratch the mask. Yodon then unleashes another Yodon Destroyer which seemingly kills the Kiramagers and their Mashin which would leave him the undisputed master of Earth.

Yodon was delighted and removed his mask to reveal his true face so that he could devour them and become all-powerful but it was a trap so that GigantDriller could blast away his indestructible mask. It then turns out that the Kiramagers he saw lying dead had been illusions created by Illusia at the same time that the Driller Knuckle hits so he wouldn’t notice the slight change in dimensions. As he is bemused by this development, GigantDriller comes in and strikes him directly in the face with the Gigant Crash which Emperor Yodon survives but is forced to become human sized which allows the Kiramagers to kill him off once and for all.

Mashin Drijan remains intact but is presumably in storage indefinitely in its hangar at CARAT.

Mashin Henkei GigantDriller (魔進変形ギガントドリラー, Mashin Henkei Giganto Dorirā, Machine Transformation Giant Driller) is the robot form of Drijan, formed by combining with Takamichi in his stone form. Due to this, rather than being controlled from a cockpit, GigantDriller is controlled directly by Kiramai Silver's mind, acting as a larger body for him. The Mecha is exceptionally strong, capable of spinning its upper body 360 degrees, and possesses enough strength to lift a Jamen Beast with the Driller Swing (ドリラースイング, Dorirā Suingu) attack with the claws on the left arm, also able utilize the right drill arm for the Drill Knuckle (ドリルナックル, Doriru Nakkuru) jabs. While GigantDriller is formidable in power, it sacrifices Mashin Drijan's speed, making it vulnerable to speed-based attacks such as those from Motorboat Basra.

Its finisher is the Gigant Crash (ギガントクラッシュ, Giganto Kurasshu), where the Giant Robo leaps in the air and delivers a burrowing flying kick with the right drill foot, destroying the Jamen Beast. This was strong enough that, when used on an unmasked Emperor Yodon, it forced him to shrink to human size. GigantDriller also has a second finisher known as the Wonder Drill Break where it charges up the drill knuckle and impales the enemy.

During the battle against the Yodon Ivy Seed, Juru devised a new finishing attack named the Grateful Go Arrow, which involved all four of the Crystalian Grand Guardians wielding a supersized Kiraful Go Arrow, pooling their energy into the weapon before firing a single supercharged shot.

The combination's finisher is the Gigant Crash Special (ギガントクラッシュスペシャル, Giganto Kurasshu Supesharu), where GigantDriller spins its upper torso like a top while Shovellow grabs on, Magellan weakens several key points before they are broken by the drills, and the monster is flung far while the remaining pieces are sucked by Duston.

n/a
Mashin Gattai Kiramai Driller is an improvised Mashin combination made by sticking Kiramaizin and GigantDriller back-to-back with Glue Shellga's glue. The combination's finisher is the Kiramai Driller Wild Scramble, where GigantDriller spins its upper half rapidly while the combination strikes multiple blows with the Drill Knuckle, Kiramaizin's feet, the Shovellow Boom and the Jetter Sword, until the Jamen Beast is destroyed.

Retrieved from "https://powerrangers.fandom.com/wiki/Mashin_Drijan?oldid=1024822"
Community content is available under CC-BY-SA unless otherwise noted.