A psychic (ESPer), as she can pick up sensory impressions of others through handling an object or visiting a location her target has touched or been to, although she can get exhausted if she overuses them. Jasmine wears gloves to help control her powers when she doesn't need to use them.

She's a calm, collected individual, though in the past considered suicide by letting an Alienizer kill her because of the depression her inability to control her powers had caused. Was rescued and recruited by Anubian Chief Doggie Kruger. Jasmine is also tight friends with Umeko, forming an unbeatable tag-team called "Twin Cam Angels".

One of her known antics is nicknaming every Alienizer before a fight (she once named a Kaijuuki Jumble-kun, due to it being a composite mash-up of previous Kaijuuki destroyed by the Dekaranger), and has even nicknamed the Abarangers (Red Saw-kun, Blue Saw-kun, and Yellow Saw-kun) and the Magirangers (Fluttering Cape Hero-kun). She is also known to throw Japanese puns (Fluttering Cape Hero-kun= Hiro hiro hero-kun).

She used to ride in Machine Doberman with Ban during patrols, but in Magiranger vs. Dekaranger, Tetsu now drives with her. Jasmine delivers a larger sense of humor in the two VS. films she appears in. In Tokusou Sentai Dekaranger vs. Abaranger, after reading Ryouga Hakua's mind, she suddenly breaks out into dancing and singing the Abaranger ending theme. In Mahou Sentai Magiranger vs. Dekaranger, Jasmine broke the fourth wall twice while being held captive with MagiBlue, first saying to the audience that Tetsu dressing like a woman was not very surprising, since he did it twice before, and asking the audience if she should say Maji?, which translates into "For real?" Her number is 4.

In Mahou Sentai Magiranger vs. Dekaranger, Jasmine broke the fourth wall twice while being held captive with MagiBlue, first saying to the audience that Tetsu dressing like a woman was not very surprising, since he did it twice before, and asking the audience if she should say "Maji?", which translates into "For real?"

A few years later, Jasmine fought alongside not only her own team, but every single Sentai ranger in existence, against the Space Empire Zangyack when it attacked the Earth in the Great Legend War. After fighting against hundreds of Gormin and their Zgormin commanders. Akarenger noticed the fleet moving towards them, he gathered all the Rangers together and gave them the order to sacrifice their powers to wipe out the first invasion's armada.

Later Captain Marvelous visited the police station she worked at, asking where the Greatest Treasure in the Universe was located while following Navi's hint that "when you are looking for something you should go see the police". A police officer recognized him from a wanted poster, and Jasmine subsequently arrested Marvelous. Marvelous recognized her uniform and deduced she was from the Space Police. After asking if she was after the bounty as well, thinking that the Space Police were now Zangyack's "little dog", she denied it. The rest of the Gokaigers escaped while Marvelous fought off her and several officers and made his escape. She then contacted Doggie Kruger and informed him of Marvelous' escape.

After the final battle against Zangyack, Doggie Kruger regained his powers and it can be assumed that all of the Dekarangers have their powers back.

Kozukozu Mita cosplays as Jasmine in the third episode of the first season of Hikonin Sentai Akibaranger.

DekaYellow appears as part of the five-man Dekaranger team alongside the other two Inordinate Sentai, Boukenger and Jetman, in Season Two's alternate take on the events of the first season. The three official Sentai come to aid the Akibarangers in the final battle with the Stema Otsu Corporation.

Jasmine, alongside her team (DekaBreak, DekaMaster, and DekaSwan were absent), among the majority of the Super Sentai heroes, was caught up in the "Super Hero Taisen" incident which eventually resulted in the Super Sentai teams and Kamen Riders joining forces to defeat both Dai-Zangyack and Dai-Shocker. During the final battle, she is seen in the background fighting Go-Gadoru-Ba.

Ten years after the Dekaranger's final battle against Abrella, Jasmine and some of her teammates retired (probably sometime after Gokaiger). She was later married to Hikaru Hiwatari, the ESP boy she saved 11 years prior and had a son with her position in the team succeeded by Mugi Grafton. It is also revealed that she has received her husband's teleport powers. When Ban and Umeko visits Jasmine in her house, Ban touches Jasmine' son, in which Ban is actually sending his secret mission to Jasmine via her son's ESP. She alongside Swan goes to Tetsu and he orders them to protect the comatose Doggie. When an Igaroid attempts to kill Doggie by using a poison, Jasmine fights the Igaroid off, at the same time Swan quickly recovers Doggie to awaken him. Afterwards, she goes to a remote planet to fetch Houji and Sen-chan via teleport and they proceed reunite with Ban, Umeko and Tetsu to battle Kight Reidlich, who is the mastermind behind these events.

DekaYellow appeared with her team among the first 38 Super Sentai whom collectively empowered Wild Tousai Shuriken King in its fight against the titanic Gillmarda, granting the Ninningers and Zyuohgers the power to perform the Zyuoh Ninnin Super Sentai Burst which destroyed Gillmarda with the combined power of all 40 Super Sentai.

DekaYellow worked with her teammates in DekaWing Robo, transforming into the DekaWing Cannon wielded by Kyutama Gattai RyuTeiOh, to keep open the wormhole which would allow the Kyurangers to return to their own space.

Possibly after the events of Dekaranger 10 YEARS AFTER, Jasmine later meets Nanami Nono/Hurricane Blue and Houka Ozu/Magi Pink, along with their respective children who are Taiga's classmates at a school. 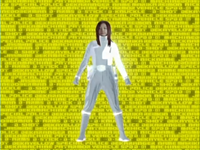 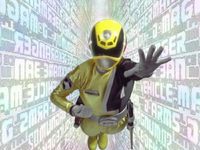 In the Korean dub of Dekaranger entitled Power Rangers S.P.D., which aired in South Korea, Jasmine keeps her name, while her Ranger designation is S.P. Yellow.

The DekaYellow Ranger Key (デカイエローレンジャーキー, Deka Ierō Renjā Kī) is Marika Reimon's personal Ranger Key and what became of her powers after she along with the rest of the 34 Super Sentai sacrificed their powers to end the Great Legend War.

This key along with the majority of the Ranger Keys were collected by the Red Pirates and later used by the Gokaigers. The DekaYellow Ranger Key was mainly used by Luka Millfy (Gokai Yellow), who used it to fight as DekaYellow.

The Dekaranger keys, along with all the Ranger Keys of the first 33 Super Sentai, were briefly taken by the Black Cross King and turned into Ranger puppets that were fought by the Gokaigers and the Goseigers. Splitting up, the puppet DekaYellow was defeated as part of a group of surviving Yellow warrior keys by Gokai Yellow and Super Gosei Yellow.

After Zangyack were finally defeated, the Gokaigers gave the Ranger Keys back to their rightful owners. Marika received her key and became DekaYellow once more. 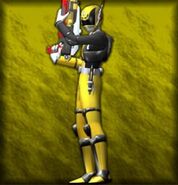 DekaYellow is among the vast pantheon of Rangers which are available in the mobile game Super Sentai Battle Base, with her SWAT Mode being available as well.

DekaYellow appears with his team among all Sentai in the mobile game Super Sentai Legend Wars, with his S.W.A.T. Mode captain form being avaliable as well.