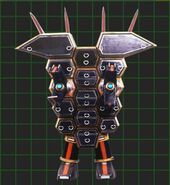 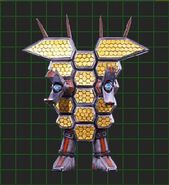 Marato first appears in Kyoto, Japan in the middle of nowhere and sucks several buildings up into its drawers. After the Rangers have a run-in with Katana, Kat is able to transport the Delta Base to Japan with its Hyper Speed Mode. Once there, it deploys the Delta Runners and the Rangers confront Marato. Delta Runner 3 opens fire but have no effect and Delta Runner 1 is blasted before it can get close enough to land a hit. Realizing that this was futile, Cruger recalls the Rangers back to the Delta Base and form the Delta Command Megazord but Jack has to leave and confront Katana. They restrain it with Super Crime Scene Tape but it breaks free and shakes up the Megazord with more blasts. However, under orders from Kat, the team shoots out the glowing orbs under its pincers with their Finger Lasers to release the captured buildings. With the buildings safe, the Megazord quickly destroys Marato with its chest blast.