Ep. 5: The Legend Where a Devil Lurks
Ep. 28: The Revived Dead Mozoos

Mantis Mozoo was among multiple Mozoo nearly revived by Shark Mozoo during a Mozoo revival ceremony stopped by Goggle V.

He had mantis claws capable of emitting energy surges, he could mentally create small explosions, and was able to emit a toxic blue gas from his mouth. 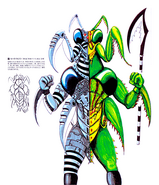