Mako Shiraishi (白石 茉子, Shiraishi Mako) is Shinken Pink (シンケンピンク, Shinken Pinku) of the Shinkengers. She serves in the next generation after her mother.

As a child, Mako was seemingly abandoned by her mother and father, shortly after the battle against Dokoku Chimatsuri. Heartbroken, the tearful Mako attempts to go after her parents as her father wheels her mother (now a paraplegic) away, but is quickly left behind. She was left in the care of her grandmother where she remained and trained to become a Samurai.

When Dokoku and the Ayakashi emerged from the Sanzu River with the intention to flood the earth, Mako and the other four Shinkengers are called to the side of the eighteenth head of the Shiba House, Takeru Shiba.

Sometime later, her father reappears and asks her to join him and her mother in Hawaii. His appearance prompts questions from the others about her life prior to their time together. Mako explains what happened between herself and her parents when she was a child and is clearly still hurt by the memory of it. Her father continues to insist that she leave Japan and come to Hawaii, and though she hesitated, Mako refused to give up on her life as a Samurai. Upon his departure, she asked why her mother did not follow him to Japan. Mamoru explained that it was never their intention to abandon her, but given her mother's present state of mind, they chose to leave her in the able care of her grandmother. Mako's understanding of their actions is brought to full circle when her mother finally appears at the airport and reaffirms Mamoru's explanation. Kyoko apologizes for leaving her and the two reconcile in a moment of tears.

After Dokoku's final defeat, Mako decides to go to Hawaii to live with her parents, but continues to join the Shinkengers when needed.

The Arrival of the Samurai Sentai

Arriving in the new world with a strange card in hand, Tsukasa finds himself in the costume of a kuroko before running into Daiki who just stole a squid-like artifact. (See his theft in the final scene in Shinkenger Episode 20) Daiki mentions that this world is not like the other A.R. Worlds before running off prior to the appearance of mysterious red fish-like monsters. Tsukasa is about to transform before several other Kuroko show up along with five young men and women who transform into the Shinkengers to fight drive them back into the Sanzu River.

Later Decade and Shinken Red fight Chinomanako, who has summoned Kamen Rider Blade to fight with him. The other Shinkengers and Kuuga manage to destroy the Eagle Undead and Moose Fangire as Decade becomes Complete Form and uses the powers of Blade King Form to attack Chinomanako.

Mako later returns from Hawaii when Takeru reunites the team together. She meets up with Chiaki, Ryunosuke, Kotoha and the five Goseigers at the docks. A brainwashed Takeru appears from his Fire Mojikara and attacks the Goseigers, leaving them on the ground after an explosion. The four Shinkengers watch in horror as Takeru turns to them. Kotoha tries to talk sense into him but to no avail. Takeru uses Kaen no mai on them, and they fall. Takeru was about uses Rekka Daizontou on them, slamming the giant blade onto the concrete, sending a rush of fire to them. But Alata blocks them, but recieves some severe burns. Genta and Gosei Knight show up, retreating everyone. While Alata is treated at Nozomu's house, Chiaki, Ryunosuke, Kotoha, Mako and Genta are all in grief about Takeru's brainwashing, but also the fact that Alata would save them from eternal defeat.

Months after wiping out the last of the Gedoshu, Mako fought alongside not only her own team, but every single Sentai ranger in existance, against the Empire of Zangyack when it attacked the Earth in the Great Legend War. After fighting against hundreds of Gormin and their Zgormin commanders, Akarenger noticed the fleet moving towards them and he gathered all the Rangers together and gave them the order to sacrifice their powers to wipe out the first invasion's armada.

After the defeat of Ackdos Gill, Captain Marvelous returned all the Ranger Keys to the former Sentai heroes. It is assumed Mako and her teammates received their keys allowing for them to utilize their powers once again.

Mako, alongside her team of the main 5 Shinkengers, among the majority of the Super Sentai heroes, was caught up in the "Super Hero Taisen" incident which eventually resulted in the Super Sentai teams and Kamen Riders joining forces to defeat both Dai-Zangyack and Dai-Shocker. Ironically, the Shinkengers were acquainted with the Great Leader of Dai-Shocker, Tsukasa Kadoya, also known as Kamen Rider Decade, having encountered him before when he visited their world.

Shinken Pink appeared with her team among the first 38 Super Sentai whom collectively empowered Wild Tousai Shuriken King in its fight against the titanic Gillmarda, granting the Ninningers and Zyuohgers the power to perform the Zyuoh Ninnin Super Sentai Burst which destroyed Gillmarda with the combined power of all 40 Super Sentai.

Mako joined the Super Sentai Strongest Battle as a member of Pink Warrior Team, but didn’t get to participate in the competition because her team was eliminated after losing the first round against Gunman Team.

Mako is a brave and kindhearted young woman who fights for her ideals. She loves children and worked at a kindergarten before becoming Shinken Pink. She dreams to have a normal and happy family, and to be a wife and mother someday, just like every other girl.

When faced with 'broken' or 'sad' individuals, she wishes immediately to help them through their pain. As an example of this, she dislikes vulnerable men as she is unable to resist the desire to 'fix' them. However, once their problems are solved, she regards their sentimental behavior as annoying.

Mako was light on her Samurai training before joining the Shinkengers, similar to Chiaki. But Mako proved to be slightly more diligent in her studies compared to him, who was the weakest of the five. While she does not share Ryunosuke's passion to serve Takeru without question, she does not outright dismiss him either, and keeps her opinion of Takeru neutral.

Despite all of Mako's skills, she is a terrible cook. One of her dishes even renders Takeru unconscious. Except for Kotoha, who looks up to her, the entire Shiba household becomes panicked whenever she decides to cook a meal. Once she discovers their opinion of her cooking, Mako takes it upon herself to sample her own cooking and admits she has room for improvement. When Kotoha is injured by Dayuu Usukawa, Mako decides to give up on cooking, believing it made her careless of their situation with the Gedoshu. However, Hikoma refuses to allow her to give up, stating that she would become inflexible without it to differentiate herself.

As Shinken Pink, she was associated to the element of sky and uses wind-based attacks to defeat or ward off her foes.
With the Shodo Phone, she uses the power of her kanji, 天 (ten, lit. heaven) to perform the Sky Dance Attack, Heaven and Earth Attack with Shinken Yellow, Whole Sky Impact and the Genuine Heaven Storm with the Inroumaru.

Like the others, Mako can use the Inroumaru to become Super Shinken Pink.

Appearances: This form is exclusive to The Return of Samurai Sentai Shinkenger: Special Act.

Super Change (スーパーチェンジ, Sūpā Chenji): A Change (チェンジ, Chenji) card that initiates the transformation from Gosei Angel to Super Goseiger. Unlike the other Gosei Cards, the activation call for this card is "Super Tensou!". In Tensou Sentai Goseiger vs. Shinkenger: Epic on Ginmaku, this card was used by Gosei Pink to allow Shinken Pink to become a Super Shinkenger without using the Inromaru.

The Shinken Pink Ranger Key (シンケンピンクレンジャーキー, Shinken Pinku Renjā Kī) is Mako Shiraishi's personal Ranger Key and what became of her powers after she along with the rest of the 34 Super Sentai sacrificed their powers to end the Great Legend War.

This key along with the majority of the Ranger Keys were collected by the Red Pirates and later used by the Gokaigers. The Shinken Pink Ranger Key was mainly used by Ahim de Famille (Gokai Pink), who used it to fight as Shinken Pink.

After Zangyack were finally defeated, the Gokaigers gave the Ranger Keys back to their rightful owners. It is presumed that Mako received her key and became Shinken Pink once more. 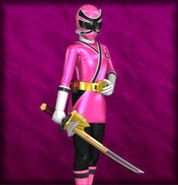 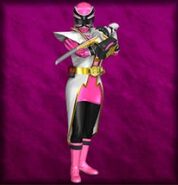 Shinken Pink is among the vast pantheon of Rangers which are available in the mobile game Super Sentai Battle Base, with her Super Shinkenger form being available as well.

Shinken Pink appears with her team among all Sentai in the mobile game Super Sentai Legend Wars.