Makito is 24 years old at the beginning of the series.[1]

Makito is the first born of the Ozu siblings. He has spent his life growing vegetables on his property, "Aniki Farm", and cooking delicious meals himself.

Hikaru's arrival initially leaves Makito feeling replaced both as head of the household and in the heart of his girlfriend Eriko. Then Hikaru proposed a survival test for the Magirangers. Thanks to the survival test, Makito regains his confidence and starts to see Hikaru's guidance in a better light and they eventually get along.

As seen in Stage 37, Makito can speak fluent English, and gave directions to an American tourist. He learnt English because he dreams of studying abroad someday.

In the finale, he is expanding his farm by studying abroad, something he put off for several years in order to support the family directly.

A few years later, Makito fought alongside not only his own family, but every single Sentai ranger in existance, against the Empire of Zangyack when it attacked the Earth in the Great Legend War. After fighting against hundreds of Gormin and their Zgormin commanders. AkaRenger noticed the fleet moving towards them, he gathered all the Rangers together and gave them the order to sacrifice their powers to wipe out the first invasion's armada.

After the defeat of Ackdos Gill, the Gokaiger returned all the Ranger Keys to the former Sentai heroes. It is assumed Makito received his key alongside his younger sister Houka, allowing for them to utilize their abilities once again.

Makito, alongside his team (MagiShine, MagiMother, and Wolzard Fire were absent), among the majority of the Super Sentai heroes, was caught up in the "Super Hero Taisen" incident which eventually resulted in the Super Sentai teams and Kamen Riders joining forces to defeat both Dai-Zangyack and Dai-Shocker. During the final battle, he is seen in the background with MagiPink, Kamen Rider Double, and Accel fighting Doukoku Chimatsuri. He and the other Magirangers later teamed up with Kamen Rider Hibiki.

MagiGreen appeared with his team among the first 38 Super Sentai whom collectively empowered Wild Tousai Shuriken King in its fight against the titanic Gillmarda, granting the Ninningers and Zyuohgers the power to perform the Zyuoh Ninnin Super Sentai Burst which destroyed Gillmarda with the combined power of all 40 Super Sentai.

Makito joined the Super Sentai Strongest Battle as a member of Refreshing Team, where he lost the first round fighting against Red Hawk of the Flying Team.

Makito is usually a cheerful fellow and moves at his own pace. But he has a nasty temper and can get on people's nerves. He tends to be a father figure to his siblings. And even though he sometimes seems overemotional and overbearing, he is truly the linchpin of the team. His determination brought the family back together after they lost to Victory General Branken, and Shichijuurou cut their familial bonds. His moral support also allowed his siblings to defeat Dark Magic Knight Wolzard when Makito had been afflicted with Mold.

Makito also tends to be emotional at weddings as it was evident during his sisters' weddings. 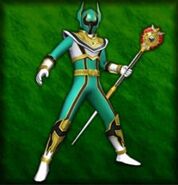 MagiGreen is among the vast pantheon of Rangers which are available in the mobile game Super Sentai Battle Base, with his Legend Magiranger form also being available as well as his Green Muscles.

MagiGreen appears with his team among all Sentai in the mobile game Super Sentai Legend Wars.

His primary attack is "Green Ground" where he creates a ground shockwave by slamming his MagiStick Ax against the ground. He can also summon vines from the ground to tie up an enemy.

This form is exclusive to Magiranger Episode 37.

MagiTaurus (マジタウロス, MajiTaurosu): MagiGreen's Majin Form. He wields the Taurus Axe. Notably bigger than the others (twice as tall as the average Majin). Forms most of MagiDragon (body, arms, and legs; Taurus Axe combines with the Mermaid Shield to form the Dragon Tail) and MagiKing (head, arms, and posterior; Dragon Tail combines with Dragon Lancer to form KingCalibur). When Hades Beastman King of Hell Samurai Shichijuurou was enlarged, Makito finished him in one blow called the Super Aniki Special Crash.

In Episode 27, Makito's body was taken over by Samurai Shichijuurou's katana with the King of Hell's armor appearing on his body. The armor would disappear after Hikaru destroys the katana, restoring Makito back to normal. 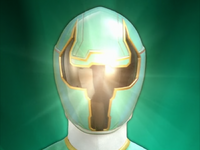 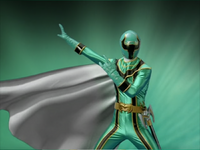 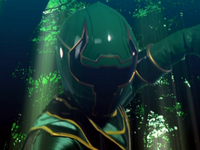 He wore green spandex with a short green cape, on which was an outline for a large "M", which went all the way down to his boots. His belt buckle was in the shape of an "M" also. His helmet bore the symbol of Taurus.

The MagiGreen Ranger Key (マジグリーンレンジャーキー, Maji Gurīn Renjā Kī) is Makito Ozu's personal Ranger Key and what became of his powers after he along with the rest of the 34 Super Sentai sacrificed their powers to end the Great Legend War.

This key along with the majority of the Ranger Keys were collected by the Red Pirates and later used by the Gokaigers. The MagiGreen Ranger Key was mainly used by Don Dogoier (Gokai Green), who used it to fight as MagiGreen.

The Magiranger keys, along with all the Ranger Keys of the first 33 Super Sentai, were briefly taken by the Black Cross King and turned into Ranger puppets that were fought by the Gokaigers and the Goseigers. Splitting up, the puppet MagiGreen was defeated as part of a group of surviving Green and Black warrior keys by Gokai Green and Super Gosei Black.

After Zangyack were finally defeated, the Gokaigers gave the Ranger Keys back to their rightful owners. Makito received his key and became MagiGreen once more.

A copy of MagiGreen was created by Hades God Toad as part of the Evil Magirangers.

In the Korean dub of Magiranger entitled Power Rangers Magic Force, which aired in South Korea, Makito is renamed Eugene.