Stage 4: The King of the Majin

MagiKing wields the Magical Sword King Calibur (魔法剣キングカリバー, Mahōken Kingu Karibā) sword that is used in its Magical Climax (マジカルクライマックス, Majikaru Kuraimakkusu) finishers: "Magical Slash" (魔法斬り, Mahō Giri) where it created a magic circle by twirling the sword in front it then do a magical energy slash; "Heavenly Magical Slash" (天空魔法斬り, Tenkū Mahō Giri), where it summons a magic circle in the sky then fly towards it, being surrounded by the Heavenly Saints, which they then begin to fly down at high speeds with the Heavenly Saints ramming towards the enemy before MagiKing finishes them off with a magical energy slash; and "Magical Hope Slash" where the Magical Sword King Calibur is covered in golden energy and extends, and then performing a large slash. Its attacks are "Phantom Illusion" where it summons multiple Magical Caliburs around it, then shoots them forward against the enemy overwhelming them with many swords; "Magical Shower" where it summons a beam of heat in the sky towards the enemy, melting them; "Gii Maji Majiiro" where it performs fast and precise slash attacks using the King Calibur.  For a brief time, Dark Magic Knight Wolzard sealed MagiKing's combination spell and took its power for his own, until FireKaiser destroyed the seal. Its suit actor was Hirofumi Fukuzawa.

MagiGaruda (マジガルーダ, MajiGarūda) is MagiYellow's Majin form. His arms, Garuda Wing (ガルーダウィング, Garūda Wingu), can be used as weapons in the "Garuda Attack." He can also shoot lightning bolts from his eyes. Its suit actor was Yasuhiko Imai. 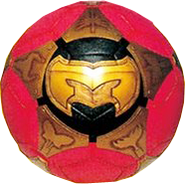 When combining, MagiTaurus forms most of MagiDragon, forming the body, arms, and legs, with his Taurus Axe then combining with the Mermaid Shield to form the MagiDragon Tail. For MagiKing, MagiTaurus forms the head, arms, and legs, and the Dragon Tail combines with Dragon Lancer to form the King Calibur, with the Taurus Axe forming the handle and pommel of the sword.

When Samurai Shichijuurrou was enlarged, Makito finished him in one blow called the "Super Aniki Special Crash". Its suit actor was Hirofumi Fukuzawa.

Through the powers of the Phantom Ranger Keys, the Gokaigers can re-create and summon the Greater Power of any Super Sentai team in existence. In Tokumei Sentai Go-Busters vs. Kaizoku Sentai Gokaiger: The Movie, the Phantom Ranger Keys reproduced the greater power of the Go-Busters, which allowed their respective mechas to transform to other previous Super Sentai mechas through Megazord keys. Masato and J on board Buster Hercules used their Megazord key to transform into Majin Gattai MagiKing.