Scroll 2: The Giant and Gadgets

"Die!"
―Jishakkumo when firing his spear at the Hurricanegers and his final words before his initial defeat.[src]

"My attacks don't work?!"
―Magnet Ninja Jishakkumo after his Magnetic Arrow attack failed to harm Senpuujin and his final words before his death.[src]

A magnet-themed spider Chunin, he was sent to use his Magnet Ninpou to control the magnetic forces in people. But the Hurricanegers scrapped him with the Quake Gadget. Jishakkumo was recreated by a Copy Giant, only to be the first opponent of Karakuri Giant Senpuujin's Sword Slasher, which negated his regeneration ability by obliterating him with it's Copy Illusion Slash. 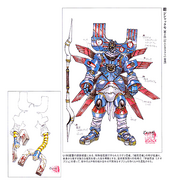