Udonna continued to study the magic in the Xenotome. During one spell, she sees a vision of the Phoenix and the hope of the future... the Mystic Force Power Rangers!.

Madison (affectionately called "Maddie") is Vida's sister. She expresses herself by filming people on her video camera as she wants to become a producer.

In Rock Solid, Nick misjudged her, suggesting that Maddie hides behind her camera. She then gets turned into stone by a monster named Clawbster, but after Nick defeated him, Madison was turned back to normal.

In Long Ago, Madison kisses a frog which turns into Daggeron.

In the three-part episode Dark Wish, Madison and the Rangers get trapped in an alternate reality where the Rangers never existed. They go to the Tribunal of Magic for help, and they later undid everything and gained the new Mystic Legend Armor.

In the two-part series finale Mystic Fate, it hints of a possible romance between Madison and Nick. After they defeated Octomus once and for all, Nick promised Madison he would return to Briarwood for her after visiting his adoptive parents, leaving her with his baby blanket.

Madison and the other Mystic Rangers returned as part of the army of Legendary Rangers that helped the Mega Rangers defeat the Armada once and for all, fighting in a huge battle against hundreds of X Borgs and dozens of Bruisers.

When Preston Tien read The Encyclopedia Of Magic & Spells, it contained a small bio on Chip Thorn and the others Mystic Rangers. Madison was mentioned as one of the magicians who defeated Octomus, the Master.

Madison was shown in archive footage along with the other Mystic Rangers in Scrozzle's database, when the villains were looking for a past villain to revive with the Reanimizer and came across Koragg The Knight Wolf.

When events set into motion by Lord Drakkon caused the timeline to split into a pocket universe, each anchored on a powerset, the Mystic Rangers were split off into their own pocket universe. Blue Mystic Ranger eventually received Zordon's call through the Morphin Grid and was among numerous Rangers who rallied to his pocket dimension led by the Quantum Ranger for the last stand against Lord Drakkon, reunited in the Command Center.

During the battle on the moon of the World of the Coinless, the Mystic Rangers, driving the Titan Megazord, are seen regrouping with Jack and Kira. However, they're attacked by Serpentera. She's also seen briefly in Tommy Oliver's vision when an alternate Kimberly threw a Green Chaos Crystal at him.

Madison along with the other Mystic Rangers are among all the Ranger teams which appear in the Korean-developed mobile game Power Rangers Dash.

Madison is the compassionate and kind-hearted member of the group. She is the Ranger closest to Nick; in fact, it is hinted they have romantic feelings for each other. Madison is shy and not very open, however, she has helped many people. She refers herself as the "sister with the common sense" in contrast to Vida's hotheaded behavior. In addition, she finds anything slimy to be creepy.

As the Blue Mystic Ranger, Madison wields the power of Water. Her weapon is the Magi. She also owns a Mystic Racer. Her Titan form is the Mystic Mermaid, which makes up the bulk of the Mystic Dragon and Titan Megazord formations. With her Legend powers, she can fuse with Chip, Vida, and Xander to form the Mystic Lion. 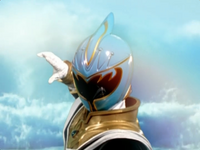 A male version of the Blue Mystic Ranger as seen in Power Rangers Super Megaforce.