"I'm not finished yet. Why don't I show you my real techniques?!"
―Mad Racer Baron's first words[src]

Baron was previously convicted with Ayase's testimony for reckless driving that resulted in an accident of a pedestrian. Released by Lila to serve as her personal driver, Baron seeks vengeance. But after challenging Ayase to another race, Ayase helped Baron see the error of his ways when he got in the way of Baron's car to avoid hitting some pedestrians. However, an angry Lila took control of him using a handheld device, giving him a stronger armor that took control of his actions. The Timerangers were able to break him free from this control, however. Brought in by TimeRobo Alpha. 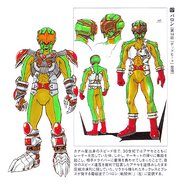