Mackenzie "Mack" Hartford is one of the main protagonists of Power Rangers: Operation Overdrive. He is the son of billionaire Andrew Hartford and an avid adventure novel reader who becomes the Red Overdrive Ranger, the Red Ranger of the Overdrive Rangers.

Billionaire and adventurer Andrew Hartford wanted a son and, due to his work, was never able to meet the right woman to make his wife. He then built an android and named him Mack. Mack was programmed with memories of his father's own childhood, so he could live as a normal teenager. Andrew and his butler, Spencer, then photoshopped old photographs to include pictures of Mack when he was a "child".

TV STORY-Things Not Said Mack continued his existence not knowing of his true origins. Outgoing and enthusiastic, he was sheltered by his father and had the desire to prove himself. Mack is heavily into adventure novels and other escapist fantasies. He was the only Ranger not deliberately recruited, the powers being intended for use by his father, being involved in Operation Overdrive by accident and against his father's initial wishes.

Two years after his activation his father had found the Corona Aurora, and it had released Moltor and Flurious from their imprisonment. The Sentinel Knight then appeared to Andrew Hartford to convince him it was now his responsibility to protect the crown and its jewels from evil. Andrew then went to work building the Overdrive Rangers's powers, zords, and weapons.

Andrew then recruited Will Aston, Dax Lo, Ronny Robinson, and Rose Ortiz to be Power Rangers, as it was his intention to become the Red Ranger. After convincing that group to become Rangers, he altered their DNA to have genetic powers. As Mr. Hartford was about to get his enhancement, Mack walked in, interrupting the procedure. This caused an impromptu meeting between Mack and Andrew. Moltor's Lava Lizards then came to the Hartford estate, causing the Rangers to have to take off. Andrew gave the Rangers their morphers, and had them go ahead. Andrew was about to morph and join the four recruits, but was captured by some Lava Lizards, causing his morpher to break free. Mack picked up the morpher and morphed into the Red Overdrive Ranger. He led the other Rangers to a victory over the Chillers and Lava Lizards. He showed bravery and quick tactical thinking in his first battle and was quickly accepted and trusted as leader by the other Rangers.

After returning to base, Moltor captured Mr. Hartford and the Corona Aurora. Mack led the other Rangers to Moltor's lair and saved him, but couldn't get the crown. After defeating one of Moltor's giant monsters, Andrew gave his blessing to Mack to become the Red Ranger as he thinks that Mack looks better in red. He was given a suit and what was assumed to be a genetic power - super strength.

Mack is also very understanding of the meaning of a team. When Will was having difficulties adjusting to working with a team, due to only doing solo work for his whole life, he helped him.

TV STORY-The Underwater World With Mack's leadership, the team found the three scrolls, which when combined, turned into Neptune's Sword, which led them to St. Lucia.

TV STORY-Heart of Blue At St. Lucia, they found the Eye of the Sea. After realizing that the Eye wasn't a jewel of the Corona Aurora, the team traded it to Brownbeard for a pearl. The Pearl turned out to be the first jewel of the crown.

After reading upon the Hou-Ou bird, Mr. Hartford concluded that it would lead them to the next jewel. Will tricked Miratrix in order to get to the parchment, but unfortunately freed Kamdor from his jewel prison.

TV STORY-Both Sides Now After the Rangers retrieved the parchment, Moltor sent a creature named Tyzonn to retrieve it. Mack, realizing that Tyzonn wasn't evil, convinced him to join the Rangers to save the world. Tyzonn used citrus acid in lemonade to get the location of the jewel hidden in the parchment. Mack and Tyzonn took the Sonic Streaker to the volcano to get the Toru Diamond. The two jewels were later used to turn Tyzonn back to his true form.

When an expedition camp is attacked by new villains known as the Fearcats in Brazil, the Rangers worked with Tyzonn to stop them. Flurious tests his gyros on the Fearcats, Mig and Benglo, turning them into powerful cyborgs. It's a race against time for the Rangers to save Tyzonn and stop the Fearcats from destroying San Angeles.

TV STORY-Man of Mercury The Rangers traveled to Norway and raced Moltor to the mystical hammer Mjolnir. Moltor retrieves it first, the Rangers then attempt to take Mjolnir back. Tracing the connection between the Cannon of Ki Amuk and Mjolnir, the Rangers travel to Mexico and are ambushed. In the process, Loki appears, masquerading as Thor, and steals Mjolnir. To get it back, Ronny disguises herself as the goddess Freyja. After the Rangers use the Cannon of Ki Amuk and Mjolnir to get the Piedra Aztec del Compás it gets stolen by Moltor.

TV STORY-It's Hammer Time Moltor sends Blothgaar to fight the Rangers. Mack is blasted by the Compass and is overcome by a serious case of a bad luck, which should have been impossible since he was a robot. Later Mack was freed from the curse with the help of his friends and they returned compass.

TV STORY-Out of Luck The Rangers then used the compass to find the Blue Sapphire, which was stolen by Kamdor and Miratrix.

"One Fine Day" revealed Mack's memories of a happy childhood ten years ago don't match with reality, with Andrew mentioning Mack first appeared only two years ago; additionally, he was unable to pass through the Fearcats's forcefield in the same episode, despite maintaining continuous physical contact with Tyzonn and Rose who had already successfully passed through.

TV STORY-One Fine Day In the final scene of Ronny on Empty II, Andrew was initially startled to see Mack's choice of Halloween costume, that of a robot. (Andrew's, fittingly, was that of a Frankinstineish mad scientist).

Mack was finally revealed to be an android when he was affected by the same computer virus created by Kamdor's monster that infected BattleFleet zords and the base's computers and he awoke to find his head not attached to his body. He was shaken by the revelation to the extent of not thinking he was needed in battle, and Spencer had to snap him out of it by reminding him that, despite his origins and the identity crisis, he was loved. The other Rangers showed support when they found out - as Tyzonn stated, they'd accepted him and he was an alien - but Mack seemed unwilling to forgive his father for keeping it a secret, refusing to talk with him.

In "Red Ranger Unplugged" he had a brief identity crisis, unsure if his hobbies were really his or just programmed into him, though he soon got past this.

TV STORY-Red Ranger Unplugged He is still resentful of his father for lying to him, and by Home and Away Part 2 he had started referring to him simply as "Mr. Hartford" and saying he can't be angry because "androids don't have emotions".

In "Way Back When ", the other Rangers plugged Mack in the main computer to see his memories, so they could find more info about the Jewels of the Corona Aurora.

In the final episode "Crown and Punishment", Mack realized his father cared for him when Flurious threatened to kill Mack for the jewels, causing Andrew to trade the jewels for Mack. After this, Mack began calling him "Dad" again. Mack uses up all his power in the final battle with Flurious to destroy the villain, but unfortunately, depleting his own power and causing severe internal damage. The other Overdrive Rangers rushed him back to Andrew, who sadly informed the Rangers that the damage to Mack's systems was too severe to be repaired, which means they lost him, and while another android could be built - that android, while it would look like Mack, would not be the Mack they knew.

Seconds later, the Sentinel Knight arrived to offer his congratulations, and was perplexed by the Rangers's reactions, until he learned that 'the valiant Red Warrior' had fallen in battle to the Corona Aurora. As he reminded them of the power of the Corona Aurora, Andrew sadly said that it was impossible to bring Mack back to life as he was only a machine, but the Knight mused that Mack had fought with too much heart to be anything other than 'real'. Using the power of the Corona Aurora (placed upon Mack's head), the Sentinel Knight not only revived Mack, but turned him into an actual human being. With Operation Overdrive succeeding in its mission to find the Jewels of the Corona Aurora, and the other Rangers leaving to return to their pre-Ranger lives, Mack is living his fondest wish, and is currently traveling on adventures with his father overseas.

Mack and the other Overdrive Rangers returned as part of the army of Legendary Rangers that helped the Mega Rangers defeat the Armada once and for all, fighting in a huge battle against hundreds of X Borgs and dozens of Bruisers.

Mack along with the other Overdrive Rangers as well among all the Ranger teams which appear in the Korean-developed mobile game Power Rangers Dash.

Mack is an enthusiastic thrill-seeker. He's willing to do anything for his team mates, and is convinced he's always been Andrew's biological son. However, he feels betrayed upon discovering he's an android. When he becomes a real human teenager, he's eager to join his father on archaeological expeditions.

In Out of Luck, Mack donned good luck charms on his costume.

The Red Sentinel Ranger is the merged form of Sentinel Knight and the Red Overdrive Ranger. Originally designed for Zord technology and too dangerous for Humans, the power-up was given to Mack due to him originally being an android. This ability was lost when Mack became human as it would've been too dangerous for him to use again. 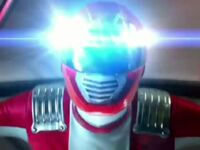 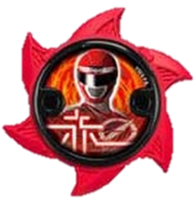 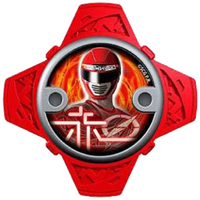