In 1998, footage of Bandora and her crew singing (from the Zyuranger episode "Break in! The Final Deciding Battle") was used in the special Power Rangers Funniest Moments. The footage was unaltered, thus leaving Machiko's voice in rather than dubbing over it.

After her 2006 passing, the producers of Power Rangers Mystic Force used footage of Soga's final toku role — Heavenly Arch Saint Magiel in Magiranger — as the basis for the "Mystic Mother" (dubbed over by voice-actress Susan Brady) in the two-part final episode of Mystic Force, "Mystic Fate". As a tribute to Soga and an easter egg for longtime fans, the Mystic Mother was revealed to be none other than a reformed Rita Repulsa. 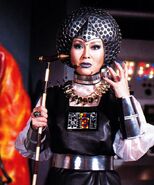