When her Captain, Marvelous, was hunting Kamen Riders, she was with the rest of the crew to fight Dai-Zangyack and to be the confused ones about how Marvelous came to get along with the enemy, and how his plan has to be killing all Kamen Riders, as they're heroes too. Nearly after meeting the Go-Busters, she's "killed" by Tsukasa Kadoya

with her Ahim, Gai, but they were in fact transported to a void space via Aurora Curtain

, where they meet other Rangers and Riders.

, by uniting every Super Sentai and Kamen Riders

available. When fighting, the Gokaigers used a full OOO

The Gokaigers returned to Earth in a quest spearheaded by Captain Marvelous with the goal being the treasure inside the Link Cube. As Marvelous acquired the treasure personally while Gai arranged for the legendary Sentai that had emerged since their initial departure to provide their Ranger Keys to assist them in battle, Luka and the others were sent to provide a distraction, guided by Navi into a confrontation with the four Zyuman members of the 40th and current Super Sentai, the Doubutsu Sentai Zyuohger. Engaging the Zyuohgers so as to stall them, Gokai Yellow fought Zyuoh Tiger one-on-one followed by her counterpart, Zyuoh Lion. Finding themselves overwhelmed by the Zyuohgers' Instinct Awakened modes, the Gokaigers selected from the Ranger Keys of recent years that Gai had acquired in order to turn back the tide of the battle, with Gokai Yellow Gokai Changing into her counterpart from the Tokumei Sentai Go-Busters.

Gokai Yellow appeared with her team among the first 38 Super Sentai whom collectively empowered Wild Tousai Shuriken King in its fight against the titanic Gillmarda, granting the Ninningers and Zyuohgers the power to perform the Zyuoh Ninnin Super Sentai Burst which destroyed Gillmarda with the combined power of all 40 Super Sentai.

Luka appears in the mid-credits scene of Kyuranger vs. Space Squad where she steals one of Raptor 283's macaroons (ironically taking the pink one instead of the yellow one next to it). Raptor immediately tries to stop her before they start fighting over it. Hammie notes that their voices sound very similar, which both do not see how.

Luka was absent from the Gokaigers when they fought against Gaisoulg, who Marvelous notices using Luka's signature "Bladed Whip" attack.

TV STORY-Battle1: Who is the Strongest in History!? It is revealed by Stinger that Gaisoulg was actually the armor with Luka inside. After moving on to Takaharu Igasaki, Gaisoulg left her chained up and later Takaharu as well after moving on to Stinger.

After Marvelous dons Gaisoulg's helmet to find her and Takaharu, Luka blasts him in the face with her Gokai Gun to get the helmet off and stomps on him to get him up. Asking him why he was so reckless, Marvelous tells her that he figured it would be fine since she was there, to which she responds with her signature, "Shut up, fool". After she explains Gaisoulg's history and Marvelous considers the matter wrapped up, he tasks her with taking down the barrier preventing communication with the outside for skipping out on their team, which prompts her to punch him. After destroying the barrier, she waits for Marvelous to come pick her up, which he fails to do and she decides that she'll have to punish him.

Gokaiger had two video games released during its run, Super Sentai Battle: Ranger Cross and Kaizoku Sentai Gokaiger: Gathered Transformation! 35 Sentai!. Gokai Yellow appeared with her team in both of them. 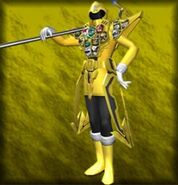 Gokai Yellow is among the vast pantheon of Rangers which are avaliable in the mobile game Super Sentai Battle Base.

Gokai Yellow appears with her team among all Sentai in the mobile game Super Sentai Legend Wars.

A tomboy and the ship's lookout who dislikes needing to have a reason to act. Excels in RECON and exploration, and has a strong tenacity for treasure hunting, earning her respect from her peers. However, her need to get the treasure often makes her forget the mission is in front of her, be that when it comes to the enemies, or her friends. Having grown up in a poor family, Luka appreciates the value of money to the point of greed. Despite this greed though, her crew views her as a good person, especially Ahim (Gokai Pink).

She frequently trains her eyes (by spotting a minimum amount of shooting stars before she goes to sleep) to help her reaction time in combat and to spot treasures. Originally a poor, homeless girl, she appreciates the value of money and tries to finds ways to get money which borderlines on being greedy. She also has a collection of expensive jewelry which the others will sometimes use to exchange for local currency, much to her dismay.

Appraisal Expertise
Luka's ability to tell fake gems from real ones are so great that jewelries keep sending men to pursue her working for them.

Like Gokai Blue, Gokai Yellow is a melee fighter, trading her Gokai Gun for Gokai Green's Gokai Saber to wield alongside her own. While she lacks the strength of Gokai Blue, she makes up for it with her resourcefulness and improvisation; wielding her Sabers like bladed whips through the wires of the Grappling hooks within the hilts or joining them together to form a double sword. When performing a Gokai Change, she usually transforms into previous Yellow Rangers.

As a Gokaiger, Gokai Yellow has access to the powers of any ranger. While there's the obvious preference for yellow, she has also been seen using other color rangers' suits and powers. She's also been known to take on powers of past male rangers, with the suit becoming a female version of its previous design.

Latorartar Combo is composed of the following parts:

As shown in cards, Gokai Yellow, along with the other Gokaigers, can use Gai's Gold Anchor Key to become Gokai Yellow Gold Mode. However, as it is Gai's key, Gokai Yellow's Gold Mode is identical to Gokai Silver's Gold Mode, with the 15 Sixth Rangers rather than her 34 counterparts.

This form is exclusive to Episode 27 and Kaizoku Sentai: Ten Gokaiger

The Gokai Yellow Ranger Key (ゴーカイイエローレンジャーキー, Gōkai Ierō Renjā Kī) is Luka's personal Ranger Key which allows her to transform into Gokai Yellow. Whereas the keys of the 34 Sentai were created out of the sacrifice of their powers in the Great Legend War, the origin of the Gokaiger Ranger Keys is unknown, though it can be assumed AkaRed had a role in their creation.

This Ranger Key was turned into a Ranger puppet once, by Basco. Along with the other Gokaigers bar an incapacitated Marvelous, Luka confronted and defeated the puppet Gokai Yellow.

Luka's bounty was initially at Z=100,000 when they met Hakase

TV STORY-Ep. 42: The Strongest Man in the Universe, which increased to Z=300,000 when they reached Earth

The latter 3 are half the amount of the midpoint between Joe and Ahim following the pattern starting with Marvelous and ignoring Hakase. (The last counting Basco's Z=10,000,000 in the stead of Marvelous' "UNLIMITED REWARD".)

The shape-shifting monster Vannain took the form of Luka. After luring Luka while in the form of her old friend Cain, he captured her and assumed her form to infiltrate the Gokai Galleon. Joining the Gokaigers during dinner, he later planted explosive charges across the ship while they were asleep. Later, Vannain detonated the charges, seemingly destroying the Gokai Galleon. Little did Vannain know, the Gokaigers easily discovered that Vannain was an imposter, having observed him eating broccoli while in Luka's form, whereas the real Luka hated broccoli. After deactivating the bombs he planted, they had Fūraimaru use his illusion technique to stage their ship's explosion to deceive him and follow him to Luka. During the fight with the Gokaigers, Vannain briefly assumed the form of Gokai Yellow while fighting Luka, moving onto Gokai Silver while fighting Gai.

Luka Millfy is portrayed by Mao Ichimichi (市道 真央, Ichimichi Mao) who later goes on to voice as Raptor 283/Washi Pink in Uchu Sentai Kyuranger. Prior to the series, Ichimichi cited the team she wanted to become was the Ohranger, mostly due to a scene where the females were dancing with the mechs. (actually due to her Ohranger equivalent, Juri Nijou/OhYellow)

In the Korean dub of Gokaiger entitled Power Rangers Captain Force, which aired in South Korea, Luka as with the rest of the first five Gokaigers keeps her name (likely because they are not from Earth and thus don't have normal Japanese names), while her Ranger designation is Captain Yellow.