Long (ロン, Ron), also known as the Mugenryu (無間龍, Mugenryū, Infinite Dragon) was the main antagonist of Juken Sentai Gekiranger, who engineered the events of the series behind the scenes until he revealed himself.

Being an immortal, Long has manipulated humanity behind the scenes out of whim for ages to ease his boring existence. Eventually, Long decided to create a Destroyer to make the world "less dull" by offering his services to Maku and to condition him while secretly aiding in the foundation of the RinJuken Aku Gata. But after the Kensei sealed Maku and the other Kenma, Long was forced to wait for another ideal pawn before he found a young Rio. Murdering the child's family, Long instilled a fear in Rio to become strong enough to escape the memory of that rainy night. To ensure no interference with Rio's progress, Long mortally wounded Dan years later so Rio can never have closure and then slaughtered Dan's kin while making it look like the village was decimated by a storm. Only Dan's wife and their son Jan survived, with Long personally killing the woman after she knocked her son into the river. Believing the child drowned, Long went back into hiding to watch Rio from afar, using his Blood-Oath Ceremony (血盟の儀式, Ketsumei no Gishiki) to obtain followers.

Eventually, once Maku was revived and forced Rio to serve him, Long revealed himself to Mele while assuring her that Rio will obtain Dorinki and defeat Maku, setting up the events for it. Furthermore, Long evoked Gou's transformations into the werewolf until Bae's interference stopped that. Long was further vexed to learn that Rio is making his way to Jūgenkyō, managing to have Rio turn back in the guises of Jan, Gou, and Sha-Fu, revealing the existence of Sozyuto that Rio needs to enter the village freely. Long also uses the same illusory power to force Mele to take the Sozyuto from Ken while he's defenseless. Once Rio and Mele make the run for the Jūgenkyō, Long revealed himself at last to Maku to hold his discarded pawn long enough for Rio to reach the village.

When the Kenma had served their purpose, Long arrives to kill Rageku in his fighting form which she recognized. With the deed done, Long fully reveals himself, offering Rio a chance to master the Genjuken style to become even stronger, converting both him and Mele in the Blood-Oath Ceremony to further his scheme. However, seeing Jan as a hindrance to his plans, Long attempts to kill him behind Rio's back. But ironically, Jan managed to awaken Rio as the Destroyer; much to Long's praise. Mele's interference ruined it, with Long's treachery and true identity revealed as a result, before beating Rio to find out why he didn't completely become the Destroyer. When Mele interferes once again, Long attempts to kill her, only to have Rio jump in front of her to shield her from the blast. Seeing Mele as the cause, Long takes her as a hostage so Rio can resume his part in the master plan. But once his plan is completely shattered, Long decides to kill them all and start finding a new Destroyer to replace Rio. However, Long was soon defeated by SaiDaiGekiRinTohja's Smashing Great Fierce-Confrontational Slash which destroyed his physical form.

However, his spirit endured and entered Sanyo, using him to recreate himself. Now with a newfound interest in the Beast-Fist power that rivals his own, Long assumes his true form to personally destroy the world himself. Mele sacrifices herself to save the Gekirangers from one of his attacks, after which Gou and Ken try and fight GekiTohjahWolf and SaiDaiOh, but Long effortlessly defeats them both. Rio attempts a suicidal attack to kill him but Long survived because of his immortality, though he was forced back into his armored form. Even in this state he still overwhelmed all five Gekirangers. Gou and Ken later fight him, along with the Kensei but they were no match for him. Long finally met his match when Jan, Retsu, and Ran returned after mastering the Rinjuken style. However, because of Long's immortality, the Gekirangers are unable to kill him so they instead sealed him in a small ball using the Dōkokugan technique. Jan safeguarded the small golden orb by wearing it as a necklace.

A year after Long's defeat, Meka (the sole surviving member of the Rinjūken Akugata by that point) stole the Doukokugan which Long was trapped in from Jan. He later fed it to his ally Nunchuck Banki who was transformed by Long's energy into Long Banki (ロンバンキ, Ron Banki). Once the Banki Beast was destroyed by Jan and Sosuke and Jan's combined attacks, Long emerged from his corpse and revealed himself to the Gekirangers and was still bitter about his previous defeat. He then transformed the corpse of Nunchuck Banki into Long Banki because, despite being partially released, Long needed to defeat the Gekirangers to break thier seal over him and ultimately become free. However, he was ultimately no match for the two teams and the combined efforts of Jan, Sosuke, and Rio knocked him back whilst Mele and the Go-On Wings took care of Meka.

With Long Banki and Meka knocked back, the Go-Ongers formed the Super Highway Buster, the Gekirangers summoned the GekiBazooka, the Go-On Wings formed thier Wing Boosters, Ken armed some missiles in his SaiBlade and Gou charged up his GongChanger to fire his Rigid-Rigid Fist attack. They then all fired in unison, destroying Meka and knocking down Long Banki although he managed to survive. Not willing to risk his defeat, Long Banki enlarged and blasted the Gekirangers with his fireballs but they immediately went into thier Engines and Gekibeasts to form Engine-O G9 and GekiRinToujaWolf. He immediately slammed them back with his heads which was strong enough to take them down and reminded them of his strength. They recovered but Long Banki delivered a beating before blasting them with a massive barrage of fire that wiped both out entirely. However, realising that they needed to survive to keep him from returning to harass the world, Sosuke summoned Engine Kishamoth, Engine T-line and Engine K-line. Long Banki fired on it but the trio was unfazed as SaiDain arrived and bombarded Long Banki with it's purifying energy. With the monster down, they combined into Engine-O G12 and SaiDai GekiRinTouja who destroyed Long Banki with the Engine Beast Grand Prix. All Long could do was scream that he was defeated despite his immortality before exploding and reverting back into a sphere.

and Super Sentai, giving them a hard time. The heroes of recent years were in a pinch until the arrival of a force of Sentai and Rider reinforcements led by Akarenger and Kamen Rider Ichigo. The combined forces of superheroes were able to turn the tide against the Madou army. They lined up and used their various finisher attacks to destroy the revived monsters.

Long is among the three Sentai villains summoned by General Tsu having ©Na steal the Akibarangers' summoning sequence and combines him with Yaiba of Darkness and Phantom Spy Vancuria to form the Darkness Inordinate Cannon.

TV STORY-Ep. 9: Delusion Number Two Later, when ©Na achieved her goal to replace the Super Sentai Series with her own Super ©Na Series, she assumes the identity of Long in her version of Juken Sentai Gekiranger with Mutoumushite added as an official Kenma.

Even in his humanoid form, Long manifested his chi in various attacks.

As the Mugenryu, Long assumed the form of a giant multi-headed quadraped dragon.

Possessing the deactivated body of Nunchuck Banki, Long turned his host's body into a humanoid version of his Mugenryu form. 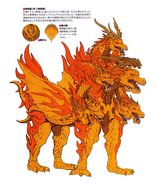