She is retroactively referred to as Yellow Jungle Fury Ranger - a variation of her in-show label. Like Casey she is 18 years old. She is one of the guardians.

Lily was a student of the Pai Zhuq academy. Along with her friend Theo Martin, she was chosen to be one of the guardians for Dai Shi. She was present when Dai Shi was accidentally released by Jarrod. Travelling with Theo and the new Pai Zhuq student Casey Rhodes, she became the Jungle Fury Yellow Ranger, under the mentorship of RJ.

Lily passes her master test and gets a Pai Zhuq Master Tattoo.

In Way of the Master, Master Phant returned and Lily trained in the way of the Elephant and gaining the Jungle Mace.

She is the nicest of the five Jungle Fury Rangers. In the episode Bad to the Bone, she became rude due to a quill attack from Porcupongo. She ends up refusing to help the other Rangers during battle, until Fran removes the quill from her.

Lily and the other Jungle Fury Rangers returned as part of the army of Legendary Rangers that helped the Mega Rangers defeat the Armada once and for all, fighting in a huge battle against hundreds of X Borgs and dozens of Bruisers.

When the timeline was restored, so was Lily.

Lily likes martial arts and was the captain of the Cheer Squad at her High School. She brought home gold by incorporating her street dance into the school performances. She may look like the stereotypical cheerleader, but underneath, she is tough as nails and not to be underestimated. She is outgoing, confident, and ready to try anything.

She is very protective of Casey and thinks of him as a little brother because he is a new student at the Pai Zhuq Academy. She would even protect Casey should anything happen to him. She also has a very close friendship with Theo, and it was hinted several times that she had been crushing on him for quite some time. In the final episode, Theo finally finds the courage to ask her out, to which Lily happily responds "What took you so long?"

She was shown to be afraid of spiders.

TV STORY-Ghost of a Chance

After succeeding against the challenge of Master Guin, Lily is rewarded with a new power-up and is given her new master's spirit. The upgrade gives her more strength and a limited range of levitation. 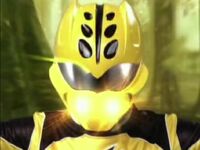 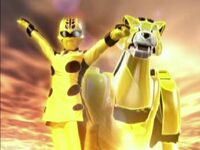 With the Speed of a Cheetah
Jungle Fury Yellow Ranger