A rather obnoxious girl who happens to be a mistress of disguise and good with a pistol. Being a material girl, she frequently steals clothing and jewelry that suit her fancy. She mostly stuck around Don Dolnero as he had the two aspects she adored: money and power. She admitted she liked him a bit even if he had lacked them. After Dolnero's death, Lila went into hiding and has been missing ever since.

It is never mentioned whether she is a human, an alien, a robot, or a cyborg. However, considering that she and Gien can eat, she is most likely organic. 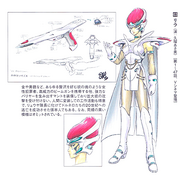