Leo Corbett is Galaxy Red, leader of the Galaxy Rangers and younger brother of Mike Corbett.

He is also referred to as Red Galaxy Ranger or Lost Galaxy Red Ranger - variations on his in-show label, though the latter is more in reference to the show than a proper label.

Leo, along with his brother, Mike, lived a comfortable life with their parents on Earth as citizens of Angel Grove. During his childhood, he hung out and played sports, often pondering about what lay beyond the reaches of Earth in space.[2] Leo was among the thousands who were present during Astronema's invasion of earth. He recounted briefly to the Red Space Ranger, Andros, that he witnessed the other Space Rangers (Zhane, Carlos, Cassie, Ashley and T.J.) morphing in front of everyone and taking on the United Alliance of Evil in their conquest of the planet.[3]

During the construction of space colony Terra Venture, Leo dreamed of joining those who would venture into space to find a new world.[4]

As a stowaway aboard the Terra Venture, Leo dared to follow his older brother, Mike, to find a new world. Against his brother's wishes, he followed him, Maya, and Kendrix through the portal to Mirinoi, wanting to help save Maya's home. He largely witnessed the discovery of the Quasar Sabers by accident. Mike originally drew the Red Quasar Saber but passed it on to Leo before falling to his apparent death at the bottom of a crevice. This allowed Leo to morph into the Red Galaxy Ranger.

Throughout the series Leo presented great bravery and courage as he faced Scorpius and eventually defeated him single-handedly. Leo can be very stubborn and hot-headed sometimes. He became close friends with Damon, Maya, Kendrix and Kai, the group helped each other with their personal strengths and weaknesses, growing stronger as time passed by. Kendrix provided morale and support during Mike's absence and in kind, Leo did the same for her. Maya taught Leo how to communicate with his Galactabeast by using his heart to understand its feelings. The lesson proved helpful when he faced Motor Mantis in a race to save Kendrix and Maya, who'd been transformed into trophies by the monster. Kai and Leo occasionally clashed with each other over his initial status as a stowaway, lack of responsibility and forgetfulness but the two became friends regardless. He and Damon share an easier friendship with each other as the two share similar qualities as easygoing and laid back young men.

In a final showdown with Furio, Leo was nearly killed when the general self-destructed inside the cave believed to contain the Lights of Orion. In the aftermath of the explosion, he was saved by the Magna Defender (who appeared on Terra Venture to seek out the Lights and destroy Scorpius at the time). Leo believed that there was still some good left in him despite the Defender's questionable morals during battle. Leo tried to show the Magna Defender the error of his ways and began to believe that something was inside of Magna Defender, holding him back from the terrible deeds he could have committed. This something turned out to be Leo's long-lost brother, Mike, who was thought to have died on Mirinoi when he fell into a crevice created by Furio.

At the bottom of the crevice, the Magna Defender was also a prisoner (defeated by Treacheron 3,000 years prior). When Mike fell in he used Mike's life force to escape. After the Magna Defender saw the error of his ways, thanks to his son, Zika, he sacrificed himself to save Terra Venture. Before his sacrifice, he released Mike and the two brothers were reunited once again. However, it was not long before Leo began to have second thoughts of his possession of the Red Quasar Saber, believing Mike to be the rightful owner. When Leo was confronted several monsters after leaving the Quasar Saber behind, Mike aided his brother by tossing the weapon to him so he could fight them off. Mike explained that he always believed in Leo; he believed that it was his brother's destiny to become the Red Galaxy Ranger. This conflict was later rendered moot when the Magna Defender's spirit made Mike the new Magna Defender.

In the team up episode with the Space Rangers, the Psycho Rangers had returned and were now under the command of Trakeena to attack the Galaxy Rangers. Psycho Red went after Leo and only with the intervention of Andros, the Red Space Ranger, did Leo evade capture like the others. Leo, together with all eleven Rangers defeat the Psycho Rangers. Psycho Pink's survival, however, resulted in the death of Kendrix who died destroying the Savage Sword to save Cassie's life. Leo was saddened by this turn of events but when the powers of the Pink Ranger were passed down to Karone, he and the others welcomed her into the team and befriended her despite her past as Astronema. Throughout the series, Leo used weapons such as the Red Transdagger, Lion Galactabeast, Red Astro Cycle, Armor Keys (which he used to become the Red Armored Ranger), the Lights of Orion and Red Capsular Cycle (which he gained through understanding his Galactabeast.)

In the finale, Leo single-handedly destroyed Trakeena in her green insectoid form when he blasted her at point-blank range. The action resulted in sacrificing his Battlizer and nearly destroying himself in the process. Leo and the other Rangers survived the crash landing of Terra Venture's ruined central dome when the Galaxy Megazord arrived in time to save them. Once it's revealed that the planet they've landed on was Mirinoi, the five Rangers return the sabers to their resting place in the stone alter. The action revived not only the planet and its original inhabitants, but Kendrix as well.

When Triskull and his ghouls invaded Mirinoi, Leo took up the mantle of Red Ranger once more and followed him to Earth. Once on the planet, he and the Galaxy Rangers helped the Rescue Rangers fight both Triskull and Trakeena who'd managed to survive his attack from the Battlizer. He fought alongside Carter Grayson, his Red Ranger successor and the Red Lightspeed Ranger. He then returns to Mirinoi.

During the Power Rangers Wild Force episode Forever Red, Leo was recruited by Andros to journey to the moon with nine other Red Rangers to destroy the last remnants of the Machine Empire and Serpentera. He arrived to the planet with Aurico in time to rescue Cole from Venjix and aided T.J. primarily during the battle against the Machine Empire Generals. Currently, Leo is living in Mirinoi either retired and watching over the Quasar Sabers or active as a Ranger protecting Mirinoi from threats. He once again returns to Mirinoi.

Leo was helping the residents of Harwood County before reuniting with his fellow Galaxy Rangers to fight the Armada. He was one of the Rangers who saluted the Mega Rangers. Again, he returns to Mirinoi.

He was shown along with the other Galaxy Rangers when the villains were looking for a past villain to revive with the Reanimizer, and came across Psycho Red. 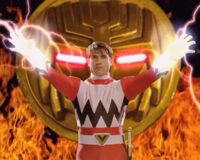 The Galaxy Red Ranger Key is Leo's personal Ranger Key. This key along with the majority of the Core Ranger Keys are seen lining the Command Center's interior walls. This key is mainly used by Troy Burrows (Super Megaforce Red) who uses it to fight as the Red Lost Galaxy Ranger.

Galaxy Red represents the Galaxy Rangers for the Lost Galaxy Dino Charger that was originally planned to be part of Dino Charger Power Pack Series 3, but was ultimately never released. This Charger would've been paired with the S.P.D. Dino Charger.