He was known for his honor and valor, which Calindor resented. As a Mystic Wizard, he can assume "Ancient Mystic Mode", resembling a red/purple fiery warrior wielding a sword and shield. Twenty years prior to the series, Leanbow led the other Mystic Wizards in the Great Battle against Octomus, the Supreme Master of the Underworld, and his Morlocks - the undead hordes under Morticon - in order to prevent them from entering the human realm.

For twenty years, Udonna and the others thought that they had lost Leanbow forever, killed in the battle that ensued behind the gate.

Leanbow is seen in a nightmare of Udonna, being tormented in a hellish dimension and chained by the shadow of a sinister knight,his wife enter in astral plane by help of the Mystic Mother where he is , his wife Udonna then sees her husband ,chained up like in her dreams and tries to comfort him, but Leanbow keeps screaming in pain and can't hear his wife,Udonna becomes the White Mystic Ranger and engages in battle with Koragg, The Knight Wolf to try and free Leanbow. However, Koragg proves to be too strong for her as he effortlessly hits her with her shield and sword,Koragg makes it clear that "Leanbow is dead" and cannot be freed from his chains,Udonna reluctantly accepts the offer and returns to Briarwood.

Return as Koragg, The Knight Wolf

In reality, Leanbow had survived to reach and seal Octomus - and before he fell, the Master was able to transform his enemy into the loyal minion Koragg. Though devoid of the memories of his old self, Koragg retained a few aspects of his previous life such as honor when refusing to attack a foe he considers to be weaker, citing such an action as a waste of his time and dishonorable, and as a result of his honor was completely loyal to Octomus.

Koragg was able to tame the wild horse Catastros, who went on to become Koragg's personal Zord. The pair can combine to become a giant centaur, or the stronger Centaurus Wolf Megazord. Being a powerful, well-versed sorcerer, he can and often does enlarge himself or defeated monsters to gigantic proportions with his dark magic. He also has admirable fighting skills in addition to his magic, and uses his Knight Saber effectively in battle. Similarly, the Wolf Shield he carries also contains the hidden "Eye of the Master", making it a useful offensive weapon. When in battle with the Power Rangers, Koragg can reveal the eye to unleash the "Wolf Attack", powerful energy blasts in the shape of wolf heads.

Koragg was apparently the first released after 20 years of imprisonment when the seal of the Underworld was cracked. Upon engaging the White Mystic Ranger, who seemed familiar to him, in battle, he bested her and stole her Snow Staff but spared her life.

Koragg often openly duels with Morticon in a power struggle, shows contempt toward Necrolai, and bows to no one except the Master.

Previously, Koragg often calmly left a fight of his own accord or whenever outside circumstances intervened. The only time the Rangers defeated him was when they summoned the Spirits of the Ancient Titans and combined their power into an incredible attack which knocked Koragg to the ground and caused him to back down. Add this to his swift defeat of the White Ranger, his clashes with Morticon, and his defeat of the Gatekeeper, and Koragg appears to be the strongest Power Ranger villain of his kind yet.

The Master has been shown directly giving him more power and he has stated to the Rangers that he becomes stronger every day, which accounts for his continually high power levels.

He was, however, outright beaten by his main rival amongst the Rangers, Nick, the Red Ranger to the point where he was almost permanently destroyed. Due to a strange, illogical power surge on the Red Ranger's part, Koragg was defeated and fell, blowing up upon full body impact with the ground. However, he was then resurrected fairly quickly and grudgingly/angrily admitted defeat. Also, in that same battle, Koragg's sword was broken into two pieces in battle with the Red Ranger. Luckily, after Morticon was destroyed in battle with the Mystic Rangers that same day, Koragg found the "Fang of the Master", (Morticon's sword) and claimed it for himself.

When Imperious challenged Koragg to give up his magical powers, and prove his battle skills, Koragg did so. His powers were given to Imperious, and he in turned turned them into the Dark Morpher. But after time, Koragg took his magic back by force. Imperious clashed numerous times with Koragg, and even tried to convince The Master that Koragg had committed treason against the forces of evil. This occurred after Imperious infected the Manticore Megazord with a virus only for Koragg to absorb it. However, after proving himself to be honorable, the Master let Koragg keep his magic; unbeknownst to him, the virus Koragg absorbed began to weaken the block that the Master put on Leanbow's memories.

When Imperious succeeded in transporting the Rangers to the Underworld, so he could use their Legend Warrior powers to revive Octomus, Udonna attempted to stop it only to be attacked by Octomus himself. After an onslaught of forgotten memories flooded his mind, Koragg came to her aid at the last second. With the evil influence that had bound him now broken, Koragg revealed himself to be none other than Leanbow, shocking everyone present. He transported everyone out of the Underworld but despite that, Nick refused to trust him and viewed his reappearance to be "one of Koragg's tricks".

Leanbow was quickly taken back to the Underworld and transformed into Koragg again, leading to a final confrontation between him and Nick. He was on the verge of killing the Ranger when Udonna intervened and revealed that Nick was, in fact, their son Bowen, and the knowledge of this freed Leanbow from Koragg once more. The reunion was short-lived as Octomus began to tear his way out of the Underworld and Leanbow, using a spell to prevent Udonna and the Rangers from intervening, traveled back to the Underworld to fight and seal Octomus once again. With his Mystic Force Fire Strike, he sacrificed himself to bring down Octomus, and nearly all of the Underworld, and then he returned the Legend Warrior powers to the Rangers.

While he appeared to be dead, Udonna firmly believed he survived and went on a quest to find him. Leanbow later appeared in the Lake of Lament in the Underworld. When Sculpin went to the lake, asking it to show him The Master, a projection of Koragg appeared, but now with Leanbow's voice. Leanbow told the Terror that though he wore the armor of Koragg, he only fought for good. He also stated that The Master would never rise up, that he wouldn't allow it. The projection then went to strike Sculpin, but soon disappeared.

Once Sculpin realized that Leanbow would not give up on keeping The Master held back, it was decided that the Rules of Darkness had to be broken. Sculpin sent Black Lance to help Megahorn attack the Rangers in Megazord Battle. This battle was shown to Leanbow in the Lake of Lament. Knowing that his own son Bowen, Nick, and the Rangers were outmatched, Leanbow returned to the surface world with Catastros. He formed the Centaurus Wolf Megazord and did battle with Black Lance. Leanbow managed to defeat Black Lance's steeds and chariot, then transported himself and the Terror back to the Underworld.

With Udonna's constant devotion to finding her husband, Leanbow was revived from his attack. Udonna's Spiritual Form went to the Underworld to find Leanbow. Once she did find him, she used her Snow Staff to revive him.

With Leanbow back, he joins the Mystic Force Rangers in their battle with Gekkor of the Ten Terrors. Utilizing a new red Morpher, Leanbow transforms into the Wolf Warrior, a new form in which he bears armor almost exactly the same as Koragg's with the major difference being its crimson color. After displaying this new form, Leanbow quickly destroyed Gekkor with a Blazing Storm Slash.

Later, Leanbow was forced to face Koragg again - the Master, attempting a pre-emptive strike, turned Leanbow's son Nick into a new Koragg and used him to destroy villages in the Briarwood forest. The battle between Leanbow and the new Koragg devastated Rootcore before he freed his son by demorphing & allowing himself to be killed without a fight, causing Nick's mind to break free of the Master's control. He then went with Daggeron to the Mystic Realm to face the Master, only to have his magic drained and be killed in battle. Revived by Necrolai, he joined in the final battle against the Master and helped overload him with good magic.

In the aftermath, Leanbow joined his wife and son in leaving Briarwood to visit Nick's adoptive parents.

Leanbow was not shown to have fought in the final battle between the Legendary Rangers and the Armada. Given his Sentai counterpart fought in the Legend War, it is entirely possible that he did indeed fight elsewhere.

When Preston Tien read The Encyclopedia Of Magic & Spells is given to Preston Tien by Mick Kanic,The book contains a small bio on Chip Thorn and the others Mystic Rangers ,Leanbow was mentions by book as one of the magicians who defeated Octomus the Master.

Leanbow doesn't appear personally in Power Rangers Beast Morphers, but he is seen in the Beast Morphers Rangers' archive footage. Many years later, Koragg had been mentioned among the villains: Astronema, Lord Zedd, Psycho Red and King Mondo, who could be resurrected by Evox. He was Scrozzle's choice but it does not happen, because Robo-Roxy remarks that Koragg turned good, same goes for Astronema based on Robo-Blaze's remark to Robo-Roxy.

Leanbow as Koragg, The Knight Wolf is recruited by Lord Drakkon in a determinate Story's point when he was still koragg , Koragg is seen invade in world of RPM along the Psycho Rangers and A Squad as reinforcements led by Lord Drakkon preparing to fight against RPM Rangers.

During the invasion in the Corinth dome city Koragg is seen along with various Mastodon Sentries, Sabertooth Sentries and Green Zeo Sentries , Koragg had a briefly fight with Ranger Operator Series Red, later the dome city of Corinth was complete invaded by Lord Drakoon and his Rangers sentries army

In the moon of the World of Coinless,when Drakkon drains the Morphers gathered in his tower, Koragg fights the Yellow Mystic Ranger atop the enemy ship.

Leanbow as the Wolf Warrior is a playable character in Power Rangers Legacy Wars, he is a Epic (Leader), common (Assist) character,represents Mystic Rangers alongside Daggeron and Udonna.

Centaurus Wolf Megazord is the second combination of Koragg and Catastros that is activated when Koragg chants "Uthe Mejor Ultimas".

Leanbow in his Ancient Mystic Mode, this form appears as a red and purple-colored fiery demon-like form. 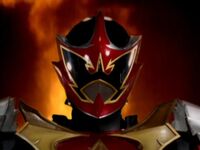 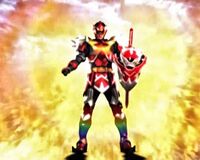 The Wolf Warrior Ranger Key is Leanbow’s personal Ranger Key. This key along with the majority of the Extra Ranger Keys are seen lining the Command Center's interior walls. This key has been used by Orion (Super Megaforce Silver) on one occasion so far.