Kyosuke was a 23-year-old (38 in Gokaiger) test driver at the Pegasus auto garage, normally only assigned to do errands and odd jobs. Kyosuke is originally a selfish jerk, insensitive enough to abandon his team because he wants to drive his boss' classic car.

Soon, though, Kyosuke realized that he had a responsibility as the Carranger leader and became very conscientious, although the role of leader sometimes gets to him and he is overwhelmed by the stress of being responsible for the team. Though unofficially the leader of the team from the start, he ends up taking the job more seriously after VRV Master suggested him as the leader in a letter he wrote before leaving Earth. Prior to then, the Carrangers had previously assumed their alien allies such as him, Dappu or Signalman as more leaders than one of their own, yet with all of them gone or unavailable, Kyosuke was forced to take up responsibility himself to lead the team accordingly, even if he became way too overexcited and energized to fight with the burden on his shoulders.

He fell in love with Beauty Zonnette, although at first she only loves his Red Racer alter ego, and is eventually able to confess his love to her. He later becomes a very brave, heroic man who was willing to risk his life to fight as Kyosuke and not Red Racer to prove his love for Zonnette.

Red Racer is among the Sentai warriors seen in clips when Yusuke Amamiya (Red Falcon) lectured Gaku Washio (GaoYellow) about the past Sentai sword experts, showing him that the true sword wasn't the sharpest, but the one that feeds on courage.

Led by his Liveman predecessor Red Falcon, Kyosuke appeared as one of 24 previous Red Warriors in Gaoranger vs. Super Sentai together with fellow Red Rangers from his predecessors Akarenger to OhRed to his successors from MegaRed, GingaRed to TimeRed.

As the twentieth Red, Red Racer's Red Warrior Spirit was embodied by AkaRed.

Years later, Kyosuke fought alongside not only his own team, but every single Sentai Ranger in existence, against the Empire of Zangyack when it attacked the Earth in the Great Legend War. He was seen alongside Riki Honoo during the fighting. After fighting against hundreds of Gormin and their Zgormin commanders. Kaijo noticed the fleet moving towards them, he gathered all the Rangers together and gave them the order to sacrifice their powers to wipe out the first invasion's armada. The Red Racer powers are later used by Captain Marvelous via the Ranger Keys.

Sometime after the war, Kyosuke, now 38, dedicated his time to teaching children about the laws of road safety with improvised acting on his part, but to no avail. The children constantly ignored his lessons, often going off to other things. He eventually catches the eye of the Zangyack Empire when Barizorg discovers he was the man that interfered with Zaggai's mission. Insarn takes one look at Kyosuke and is immediately smitten by his looks. She enlists the help of Jealousto to capture the former Red Racer, which ultimately draws the attention of the Gokaigers, who were searching for a Sentai warrior connected to traffic safety.

He introduces himself to the group, hoping to enlist their talents in his acting troupe. The Gokaigers decline and flee from warrior, but only Don is caught by Kyosuke. When things don't go as planned, Insarn attempts to capture Kyosuke herself, eliciting a jealous reaction from Jealousto, who tries to kill Kyosuke. He is eventually saved from both Zangyack warriors when the Gokaigers use the Carranger Ranger Keys to fend off a enlarged Jealousto and Insarn realizes her "love" for Jealousto. In the end, Kyosuke manages to successfully teach the children about traffic safety when the Gokaigers agree to act as bickering traffic lights.

After the Gokaigers finally defeat the Zangyack invasion force on Earth and the emperor, Marvelous returned all of the Ranger Keys to their original owners. It is assumed Kyosuke and his team have their powers back.

Kyosuke, alongside his team (bar Signalman), among the majority of the Super Sentai heroes, was caught up in the "Super Hero Taisen" incident which eventually resulted in the Super Sentai teams and Kamen Riders joining forces to defeat both Dai-Zangyack and Dai-Shocker. During the final battle, he is seen in the background fighting Go-Baberu-Da and Taursus Ballista.

Red Racer appeared as part of a conference of the first 38 Reds led by Red Falcon, who addressed the Ninningers and Zyuohgers as the greater Super Sentai pantheon intervened to save them from defeat at the hands of the titanic Gillmarda. Empowering the Combination Nin Shuriken to form Wild Tousai Shuriken King, the first 38 Super Sentai further imbued their successors with the power to perform the Zyuoh Ninnin Super Sentai Burst, destroying Gillmarda with the combined power of all 40 Super Sentai.

Kyosuke joined the Super Sentai Strongest Battle as a member of Big Eater Team. It’s unknown whether he participated in the match, but his team was eliminated after losing the first round against the Gilded Team.

Kyosuke alongside with his Sentai Red Ranger predecessors appeared to help the Zenkaigers.

During the climatic final battle itself, he can be seen fighting alongside Go-On Red, Kamen Rider Drive and Kamen Rider Sabela. 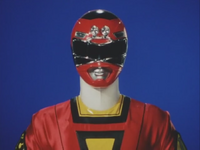 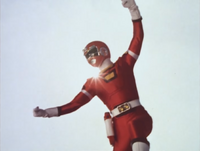 The Red Racer Ranger Key (レッドレーサーレンジャーキー, Reddo Rēsā Renjā Kī) is Kyosuke Jinnai's personal Ranger Key and what became of his powers after he along with the rest of the 34 Super Sentai sacrificed their powers to end the Great Legend War.

This key along with the majority of the Ranger Keys were collected by the Red Pirates and later used by the Gokaigers. The Red Racer Ranger Key was mainly used by Captain Marvelous (Gokai Red), who used it to fight as Red Racer. It was also used by Joe Gibken (Gokai Blue), Don Dogoier (Gokai Green) and Gai Ikari (Gokai Silver) on one occasion each.

After Zangyack were finally defeated, the Gokaigers gave the Ranger Keys back to their rightful owners. Kyosuke received his key and became Red Racer once more.

A Carranger Zyudenchi which bears the likeness of Red Racer is part of the Legend Sentai Zyudenchi toyline which can be used in Super Sentai Battle: Dice-O.

Kyosuke as Red Racer appears with his team in the video game Gekisou Sentai Carranger: Zenkai! Racer Senshi. The RV Mechas have been dismantled and their parts scattered all around, so it is up to the Carrangers to collect all the parts required to rebuild them, all the while fighting the Bowzock gang. The parts appear in the form of cogs and gears, and can only be obtained by striking various objects and killing off Wumpers along the way, among other forms (finding and getting an engine, for example, will give off ten parts). Each Mecha requires 50 parts to be rebuilt.

Kyosuke Jinnai/Red Racer: to be added

Red Racer is among the vast pantheon of Rangers which are available in the mobile game Super Sentai Battle Base.

Red Racer appears with his team among all Sentai in the mobile game Super Sentai Legend Wars.