Umeko rides the Machine Bull with Sen-chan and often is partnered up with him. She tends to be a ditz, but she has a good heart, and can often bring the team together under the direst of circumstances with her perkiness. She spends every moment she can in a bubble bath with her three rubber ducks, whom she calls Umeyo, Umenosuke, and Umegoro.

While Anubian Chief Doggie Kruger is the leader of Earth's Dekarangers, Umeko claims to be the "field leader" of the team. She is a master of disguise. Kruger gave her responsibility for Murphy K9, who was originally undisciplined to the point she put him into an armbar. However, since then, she and Murphy became close, until Murphy was transferred to Fire Squad and reformatted to become Ban's Battlizer Mode.

Umeko had been dating a man named Hironobu but was heartbroken when she heard him bragging to Sen-chan about fooling women. Although she was angry at Sen-chan for suspecting Hironobu to be a criminal, she later realizes that she has feelings for him. By Mahou Sentai Magiranger vs. Dekaranger, she and Sen are together, so to speak; however, Sen had forgotten about their date and angered her. As a result, she put Sen in a headlock. She also had a brief crush on Mikoto Nakadai/AbareKiller in Tokusou Sentai Dekaranger vs. Abaranger but though upset about having him return to the afterlife she had to accept his request of letting him go back. Her number is 5.

A few years later, Umeko fought alongside not only her own team but every single Sentai ranger in existence, against the Empire of Zangyack when it attacked the Earth in the Great Legend War. After fighting against hundreds of Gormin and their Zgormin commanders. AkaRenger noticed the fleet moving towards them, he gathered all the Rangers together and gave them the order to sacrifice their powers to wipe out the first invasion's armada.

Although other members of the Dekaranger team had given the Greater Power of their team to the Gokaiger, Umeko does lend a hand in Gokaiger Goseiger Super Sentai 199 Hero Great Battle, giving the teams encouragement as well as encountering two fellow Sentai alums, Daigorou Oume and Ryo of the Heavenly Fire Star.

After the Zangyack Empire was defeated by the Gokaigers, Marvelous returned the Ranger Keys to their original owners. Umeko and her teammates have their powers again.

While imagining himself to be Banban Akaza (DekaRed) at the start of the series, Nobuo Akagi calls his boss "Umeko."

Kozukozu Mita, the cosplaying maid at Café Himitsukichi, can be seen dancing while dressed as Umeko in the opening of season 1 of Akibaranger.

Ikura, a part-time maid at Café Himitsukichi, also cosplays Umeko in the sixth episode of season 1 of Akibaranger.

DekaPink appears as part of the five-man Dekaranger team alongside the other two Inordinate Sentai, Dekaranger and Jetman, in Season Two's alternate take on the events of the first season. The three official Sentai come to aid the Akibarangers in the final battle with the Stema Otsu Corporation.

Umeko, alongside her team (DekaBreak, DekaMaster, and DekaSwan were absent), among the majority of the Super Sentai heroes, was caught up in the "Super Hero Taisen" incident which eventually resulted in the Super Sentai teams and Kamen Riders joining forces to defeat both Dai-Zangyack and Dai-Shocker.

as the three forces of superheroes confront Space Shocker. After Demon King Psycho

DekaPink appeared with her team among the first 38 Super Sentai who collectively empowered Wild Tousai Shuriken King in its fight against the titanic Gillmarda, granting the Ninningers and Zyuohgers the power to perform the Zyuoh Ninnin Super Sentai Burst which destroyed Gillmarda with the combined power of all 40 Super Sentai.

Alerted to an illegal landing on Earth, Umeko and Sen arrested three individuals without visas who were assumed to be Alienizers: Shou Ronpo, Hammy, and the Anubian-esqe Garu. Taking them into custody at Neo DekaBase, the situation was cleared up when Doggie Kruger arrived. DekaPink worked with her teammates in DekaWing Robo, transforming into the DekaWing Cannon wielded by Kyutama Gattai RyuTeiOh, to keep open the wormhole which would allow the Kyurangers to return to their own space. Seeing the Kyurangers off, Umeko and Sen were reminded by Doggie to collect their visas to travel to the planet Waiha, where they were to be married. 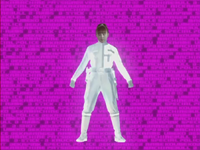 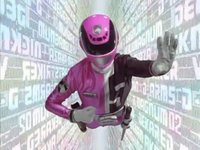 In the Korean dub of Dekaranger entitled Power Rangers S.P.D., which aired in South Korea, Umeko is renamed Urika, while her Ranger designation is S.P. Pink.

The DekaPink Ranger Key (デカピンクレンジャーキー, Deka Pinku Renjā Kī) is Koume Kodou's personal Ranger Key and what became of her powers after she along with the rest of the 34 Super Sentai sacrificed their powers to end the Great Legend War.

This key along with the majority of the Ranger Keys were collected by the Red Pirates and later used by the Gokaigers. The DekaPink Ranger Key was mainly used by Ahim de Famille (Gokai Pink), who used it to fight as DekaPink.

The Dekaranger keys, along with all the Ranger Keys of the first 33 Super Sentai, were briefly taken by the Black Cross King and turned into Ranger puppets that were fought by the Gokaigers and the Goseigers. Splitting up, the puppet DekaPink was defeated as part of a group of surviving Pink and White warrior keys by Gokai Pink and Super Gosei Pink.

After Zangyack were finally defeated, the Gokaigers gave the Ranger Keys back to their rightful owners. Umeko received her key and became DekaPink once more. 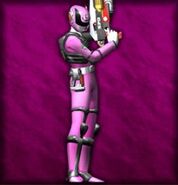 DekaPink is among the vast pantheon of Rangers which are available in the mobile game Super Sentai Battle Base, with her SWAT Mode being available as well.

DekaPink appears with her team among all Sentai in the mobile game Super Sentai Legend Wars.