Kouichirou Endou (遠藤 耕一郎, Endō Kōichirō) is MegaBlack (メガブラック, Mega Burakku) of the Megarangers. He is 18 years old (19 as of Gingaman vs. Megaranger and 32 as for the Great Legend War in Gokaiger), and is the president of Moroboshi High School's Digital Research Club. He is described as "powerful, but a bit slow."

Kouichirou is the president of the "Digital Research Club" of Moroboshi High; he was one of four students (alongside fellow students Shun Namiki, Chisato Jougasaki and Miku Imamura) investigating strange occurrences and technology being created at the NASADA plant in connection to the works of I.N.E.T., unknowing that Kenta Date, a fellow student, had already been recruited for their research. When the Nejireija began their invasion pre-emptively, the four students and Kenta were all given Digitizers and the task of becoming Megarangers in order to battle the invaders from the twisted realm.

TV STORY-Ep. 1: Don't Let Them! The Twisted Invaders After the five became Megarangers, Kouichirou invited Kenta to join their club due to their current common connection, even though his grades are lacking.

A keen soccer player, Kouichirou is an overachiever who is always concerned about his schoolwork. He has a younger brother named Shinji, who also plays soccer.

MegaBlack is among the Sentai warriors seen in clips when Gouki (GingaBlue) lectured Soutarou Ushigome (GaoBlack) about the past Sentai strong warriors, humbly claiming to not be nearly as strong as they are.

Kouichirou's appearances in the "Versus Series", Megaranger vs. Carranger and Gingaman vs. Megaranger, are featured in the Super Sentai Versus Series Theater, hosted by the heroes of Tensou Sentai Goseiger. Agri (Gosei Black) also dresses as Kouichirou in the Megaranger cosplay.

Years later, Kouichirou fought alongside not only his own team but every single Sentai ranger in existence, against the Empire of Zangyack when it attacked the Earth in the Great Legend War. After fighting against hundreds of Gormin and their Zgormin commanders. Akarenger noticed the fleet moving towards them, he gathered all the Rangers together and gave them the order to sacrifice their powers to wipe out the first invasion's armada. The MegaBlack powers are later used by Don Dogoier via the Ranger Keys.

After the defeat of Ackdos Gill, Captain Marvelous returned all the Ranger Keys to the former Sentai heroes. It is assumed Kouichirou and his teammates received their keys, allowing for them to utilize their powers once again.

Kouichirou, alongside his team (bar MegaSilver), among the majority of the Super Sentai heroes, was caught up in the "Super Hero Taisen" incident which eventually resulted in the Super Sentai teams and Kamen Riders joining forces to defeat both Dai-Zangyack and Dai-Shocker. During the final battle, he is seen with Kamen Rider RX fighting Isoginjaguar.

MegaBlack appeared with his team among the first 38 Super Sentai who collectively empowered Wild Tousai Shuriken King in its fight against the titanic Gillmarda, granting the Ninningers and Zyuohgers the power to perform the Zyuoh Ninnin Super Sentai Burst which destroyed Gillmarda with the combined power of all 40 Super Sentai.

Kouichirou joined the Super Sentai Strongest Battle as a member of Serious Team, but didn’t get to participate in the competition because his team was eliminated after losing the first round against Oddball Team.

As MegaBlack, Kouichirou's crest is the satellite, which enables him to connect to the world satellite network and trace digital transmissions. 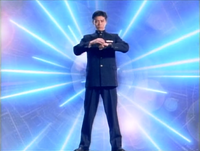 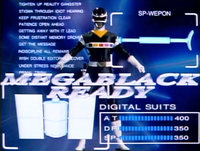 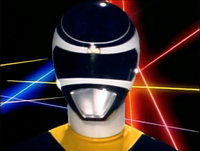 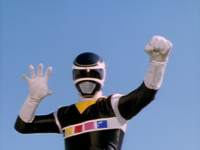 Kouichirou, along with Kenta, Chisato, and Miku, disguised themselves as MegaBlue in an effort to fool NejiBlue.

The MegaBlack Ranger Key (メガブラックレンジャーキー, Mega Burakku Renjā Kī) is Kouichirou Endou's personal Ranger Key and what became of his powers after he along with the rest of the 34 Super Sentai sacrificed their powers to end the Great Legend War.

This key along with the majority of the Ranger Keys were collected by the Red Pirates and later used by the Gokaigers. The MegaBlack Ranger Key was mainly used by Don Dogoier (Gokai Green), who used it to fight as MegaBlack.

The Megaranger keys, along with all the Ranger Keys of the first 33 Super Sentai, were briefly taken by the Black Cross King and turned into Ranger puppets that were fought by the Gokaigers and the Goseigers. Splitting up, the puppet MegaBlack was defeated as part of a group of surviving Black Green warrior keys by Gokai Green and Super Gosei Black.

After Zangyack were finally defeated, the Gokaigers gave the Ranger Keys back to their rightful owners. Kouichirou received his key and became MegaBlack once more.

MegaBlack appears with his team in the Denji Sentai Megaranger video game.

MegaBlack is among the vast pantheon of Rangers which are available in the mobile game Super Sentai Battle Base.

MegaBlack appears with his team among all Sentai in the mobile game Super Sentai Legend Wars.