Kotoha is a pure-hearted girl who worked in a bamboo shop. Her older sister, Mitsuba Hanaori, was originally intended to become Shinken Yellow. But when Kotoha was a child, her sister became ill. So Kotoha had to replace her sister.

Kotoha commands the element of earth as Shinken Yellow.

Prior to becoming Shinken Yellow, Kotoha resided in the countryside with her family. She came to the city the for the first time when she became a Shinkenger. For this reason, she often gets lost when she is out in the city alone.

Kotoha has great respect for all the members of the group, especially Mako and Takeru. Kotoha admires Mako as a female, stating that she is pretty, intelligent and can cook (apparently oblivious to the fact that Mako is a terrible cook). Kotoha looks up to Takeru and always shows respect to him. Because of this, Kotoha feels quite uncomfortable when she poses as Matsumiya's fiancée, with Takeru acting as her butler.

Kotoha and Chiaki are the youngest Shinkengers, with Kotoha stated being younger than Chiaki. Because their similar age, they have a strong bond. In fact, several episodes focus on their relationship. Kotoha and Chiaki experience some tension because he dislikes how she readily believes that she is stupid, and he accidentally hurts her feelings. Chiaki later apologizes, and Kotoha tells him that she admires his straightforwardness.

When one is feeling stressed, one will try to cheer the other up. Kotoha is Chiaki's staunchest supporter and readily goes along with his plans, despite how reckless they often are. When her soul was stolen, Chiaki, out of all them, was troubled the most by this event. He was the first to go seek the Ayakashi that had stole Kotoha's soul and he was the first to consider becoming a Gedonin in order to enter the Sanzu River in order to find said Ayakashi.

Months after wiping out the last of the Gedoshu, Kotoha fought alongside not only her own team, but every single Sentai ranger in existence, against the Empire of Zangyack when it attacked the Earth in the Great Legend War. After fighting against hundreds of Gormin and their Zgormin commanders, Akarenger noticed the fleet moving towards them and gathered all the Rangers together and gave them the order to sacrifice their powers to wipe out the first invasion's armada.

After the Zangyack's final defeat, Marvelous returned the Ranger Keys to their original owners. It is assumed Kotoha and her team have their powers back once again.

Kotoha, alongside her team (Shinken Gold and Princess Shinken Red were absent), among the majority of the Super Sentai heroes, was caught up in the "Super Hero Taisen" incident which eventually resulted in the Super Sentai teams and Kamen Riders joining forces to defeat both Dai-Zangyack and Dai-Shocker. Ironically, the Shinkengers were acquainted with the Great Leader of Dai-Shocker, Tsukasa Kadoya, also known as Kamen Rider Decade, having encountered him before when he visited their world. During the final battle, she is seen fighting a Shocker Combatman and Arch Orphnoch.

, to help Geki's assistant Shelly (who shared a resemblence with Kotoha) hack Gavan's Transformation Space System in order for Geki to be able to transform into Gavan Type-G again to battle Space Shocker.

Later on, the five-man Shinkenger team appeared as part of a force of Sentai and Rider reinforcements led by Akarenger and Kamen Rider #1

Shinken Yellow appeared with her team among the first 38 Super Sentai whom collectively empowered Wild Tousai Shuriken King in its fight against the titanic Gillmarda, granting the Ninningers and Zyuohgers the power to perform the Zyuoh Ninnin Super Sentai Burst which destroyed Gillmarda with the combined power of all 40 Super Sentai.

Kotoha is obedient and skilled at martial arts, However, despite her skills, she is extremely hard on herself. This is primarily because she believes that herself to be stupid and an unfit replacement for Mitsuba. Her teammates try to dissuade her from believing so, but she refuses to believe it. Her acknowledgement of her faults were so strong that she was immune to the power of the Ayakashi Zuboshimeshi who used people's internal negative feelings against themselves. Kotoha's will was so strong due to her self-loathing that she was unaffected by its power.

TV STORY-The Abusive King When her soul was stolen, she was glad that she was the only one among the team to have had this happen to them. It's only after Mitsuba sends her a letter, telling her that she is the true Shinken Yellow, that Kotoha begins to accept herself as a true Shinkenger.

Kotoha is also very selfless and kind; her kindness caused a young plutocrat named Matsumiya to fall in love with her. Her selflessness was highlighted when she pretended to loathe Matsumiya, pretending her desire for his hand in marriage was fueled by greed.

Kotoha is skilled at playing the flute as well. In her childhood, whenever she would become sad, her sister played the flute for her to cheer her up. After growing up, she plays the flute to feel better whenever she feels down.

Appearances: This form is exclusive to The Return of Samurai Sentai Shinkenger: Special Act.

Super Change (スーパーチェンジ, Sūpā Chenji): A Change (チェンジ, Chenji) card that initiates the transformation from Gosei Angel to Super Goseiger. Unlike the other Gosei Cards, the activation call for this card is "Super Tensou!". In Tensou Sentai Goseiger vs. Shinkenger: Epic on Ginmaku, this card was used by Gosei Yellow to allow Shinken Yellow to become a Super Shinkenger without using the Inromaru.

The Shinken Yellow Ranger Key (シンケンイエローレンジャーキー, Shinken Ierō Renjā Kī) is Kotoha Hanaori's personal Ranger Key and what became of her powers after she, along with the rest of the 34 Super Sentai sacrificed their powers to end the Great Legend War.

This key along with the majority of the Ranger Keys were collected by the Red Pirates and later used by the Gokaigers. The Shinken Yellow Ranger Key was mainly used by Luka Millfy (Gokai Yellow), who used it to fight as Shinken Yellow.

After Zangyack were finally defeated, the Gokaigers gave the Ranger Keys back to their rightful owners. It is presumed that Kotoha received her key and became Shinken Yellow once more. 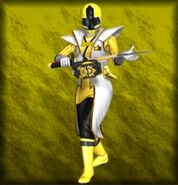 Shinken Yellow is among the vast pantheon of Rangers which are available in the mobile game Super Sentai Battle Base, with her Super Shinkenger form being available as well.

Shinken Yellow appears with her team among all Sentai in the mobile game Super Sentai Legend Wars.