He and Makuin of the Blob were sealed away in the Erurei Box by a legendary angel years ago and bringing about the end of the Gosei Angel war with the Yuumajuu. Years later, the box was unearthed during a struggle between the Goseigers and Dereputa of the Meteor and Brajira breaks the seal, freeing the duo. Though he and Makuin are a powerful pair, Kinggon unintentionally falls into the spell of his friend Jogon thanks to a ploy by Buredoran, and had nearly getting himself killed by the Goseigers when he attempts to prove his superior strength to what he believed was Makuin. However, Kinggon realized he was deceived and managed to find the hive holding the Bibi Bugs before returning to get rid of Buredoran. Kinggon aids Makuin in their final plan until his partner is killed off and he himself is destroyed by Gosei Ultimate soon after when Buredoran's Bibi Bugs enlarge him.

His spirit later appears to Brajira along with Makuin, futilely trying to attack him before being cast away.

He is mysteriously revived in Kaizoku Sentai Gokaiger vs. Uchuu Keiji Gavan: The Movie. He briefly fights Captain Marvelous and Ahim de Famille in a forest. Despite not seen again, it's implied he's destroyed again when the GokaiGalleon Buster's Special Charge destroys the Makuu Prison.

Kinggon of the Bigfoot was among the villains who were revived by Super Warumono World to fight the Zenkaigers and Sentai Red.

While not the ultimate leader of the Yuumajuu, he is seen by Makuin as a long time friend rather than a mere general. In addition to being a powerful pair with Makuin, Kinggon shares his partner's respect for his fellow Yuumajuu, even having an old friend in Jogon. He appears initially as an arrogant brute that is not quite smart, but he is actually great at strategy and intelligence. While he initially fell for Buredoran's scheme to split him and Makuin up, he managed to find out about the deception and comes up with a plan to trick Buredoran in order to foil his treachery. Kinggon also cares about Makuin to the point where he is shocked and upset when he is killed, attempting to kill the Gosei Angels and Gosei Knight as payback before his own death.

He has super strength and enhance durability, can release toxic fumes from his body to poison anything(except him and Makuin). Can shoot out a purple fireballs, and shoot lightning from his hands. 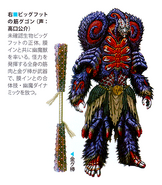 Kinggon of the Bigfoot Concept Art