KillerGhost is a monster-clone created by Mikoto Nakadai using a Life Berry and modelled after AbareKiller himself in Abare Mode, with Mikoto speaking through the monster. KillerGhost is so powerful that it manages to capture 5 of the Bakuryuu, as part of Mikoto's sick game: The Abarangers have to destroy KillerGhost or their friends are going to be melted down.

However, the Bakuryuu manages to withstand the heat so Mikoto decides to place them all under his control unless the Abarangers defeat KillerGhost. However, Killer Ghost proves to be strong enough to defeat the Rangers until the StyRiser is activated and the other Abarangers give their Dino Guts to Ryouga, allowing him to become AbareMax for the first time and kill the monster just in time. KillerGhost does not grow for a second time since its Life Berry does not survive its explosion,

KillerGhost is later revived by Rejewel who recreates it with a Life Berry as Rejeweloid: KillerGhost Generation II ((ジュエロイド・キラーゴーストII世, Rijueroido Kirāgosuto Nisei) which also upgrades it with more power than before and to act as a medium for her voice. It is made giant sized, fighting AbarenOh and overpowering the robo, until it gains a Dino Guts power-boost, and impales the monster through a mountain with the Tyrano Drill. Though it explodes, KillerGhost survives albeit forcibly shrunk down to human size where it is killed forever by Asuka's Circle Moon. Due to already having enlarged beforehand, its Life Berry is spent and is thus unable to enlarge it for a second time.

Both versions of KillerGhost were incapable of speech besides animalistic screeches though Mikoto was able to speak through it. However, they were very loyal to their masters and the Evolians. 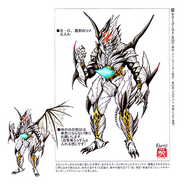 Mikoto projecting his laughter through KillerGhost