"What? There was nothing. Damn you! How devilish."
―Key Jester reacting to the success of a door illusion and his final words before his death.[src]

Key Jester, as his name suggests, is a key themed Gorma Minion.

An oddball hard-to-catch Gorma. He spent most of his time rolling about on rollerblades, choosing children and stealing their souls to give life to his bloodthirsty dolls. Killed by the Dairangers making their Qi Bomber Attack. He was brought back by Duke of Cards to fight the Dairangers and then absorbed by him to become Great King Ojaru. 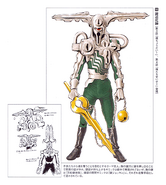 Retrieved from "https://powerrangers.fandom.com/wiki/Key_Jester?oldid=974950"
Community content is available under CC-BY-SA unless otherwise noted.